Mission: to support growth and the right to play. Since 1997, Pirelli has been a partner of Inter Campus in a project of sports education throughout the world

From the land of the Aztecs to that of the Khmer Empire, by way of the Pampas of Argentina, the Amazon forests of South America, the Caribbean Sea, and the island of Cuba, on to Cameroon, Angola, Congo, Uganda, and the deserts of northern Africa, the journey then continues on the roads of Europe, through the Balkans, and onward ever farther to the east: Lebanon, Israel, Palestine, Russia, Iran and, finally, China. 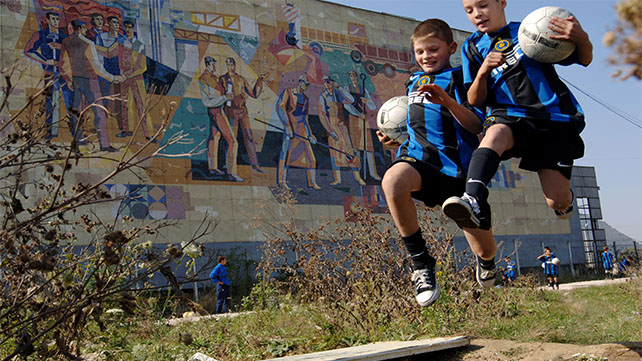 It is a voyage in which the stories of people, customs, traditions, and a unique range of human experience intertwine, each with their own peculiar traits that are often much different from our own. Stops along the way include nations fraught with poverty and war, trapped in a past that prevents any real opportunity for growth, but it is also not uncommon to be somewhere more developed where the complexities of society—a society often trapped in a cage of contradiction—inhibit equal opportunity. As is usually the case, it is the children and their future that pay the highest price.
Since 1997, thanks to the efforts of the entire Moratti family (Carlotta Moratti is the chairman of Inter Campus, and her father, Massimo, was at the helm of FC Internazionale from 1995 to 2013), Inter Campus has been travelling the world, taking its educational programme to all of these locations, meeting the people, learning of their homelands, their challenges, and the beauty of places that are often drastically different from what we are used to. From the head office in Milan, a team of Inter Campus trainers and staff have crossed the oceans on many a trip to the farthest reaches of the globe to immerse themselves into lands where the view of the world can be so different from our own.
Inter Campus has a mission, to give back to children ages 6 to 13 their right to a happy, playful childhood—that time in our lives when we lay the foundations of our own personality, fuel our creativity, and discover our passions and our dreams, which are the cornerstones for personal growth. Thus far, this project has gone out to 29 nations around the world, on 4 continents surrounded by 3 different oceans and awash with countless lakes, rivers and seas. Meazza Stadium would be too small to contain all of the children who have participated in Inter Campus programmes, a population diverse enough to hold an Inter Campus World Cup [as was done in Milan in 2009]. Thanks to the efforts of the Inter team, their head coach, Roberto Mancini, and team vice-president Javier Zanetti—all ready at any time to help with the work of Inter Campus—the project continues to this day.
The Inter Campus project features a great deal of work on the field to instil the values of sportsmanship, values that the children can take with them even off the playing field and a project backed by partnerships with local organisations to help educate children and teach them the sport with the assistance of Inter Campus trainers and equipment and other local operators. This local support of associations and individuals in the various locations is key to better understanding the local communities and their specific needs.
The entire Inter Campus team shows great passion in everything they do, as can be seen in the great many videos produced and posted online, which testify to the efforts of Inter Campus around the world and tell the stories of everyone who, day after day, continues working in the field—stories of faraway peoples and places that are often not seen in the news or on social media and stories of sport as a means of restoring their right to play and to solidarity.
In this way, Inter Campus promotes a wide range of values within these communities, the values of teamwork, loyalty, and courage. The children are given the opportunity to have regular medical check-ups that their families could not normally afford. Education, too, plays a crucial role in the efforts of Inter Campus, which depend on the attendance of these children in school.
For these children, attending an Inter Campus programme means finding an alternative to the street and gives them a chance to spend their free time in a safer place.
At an Inter Campus, children can discover the world and its many facets, with sport as the primary vehicle of education as the organisation supports their growth and the development of their communities thanks, in part, to the values of sport.

Inter Campus has been traveling the world since 1997, taking its educational programme to all of these locations, meeting the people, learning of their homelands, their challenges, and the beauty of places that are often drastically different from what we are used to.
A project that has reached 29 countries on 4 continents surrounded by 3 oceans.
Stories children from faraway lands, stories that are not always heard in the news or on social networks. Stories of sport and, above all, of solidarity.

From Space to Earth: the mission continues