From Parque Seleta to San Siro: the story of the latest green and yellow star to join Inter

In the beginning, there was Ronaldo. O'Fenomeno, o he of "Power is nothing without control" and the paso doble that bewitched even the world’s best defenders. Then came the turn of Adriano, the Emperor who stormed in from the left and pushed over the goals. And then there were Maicon and Lucio, the ministers of the defence for Inter in the era of the Triplete and the last representatives of that thread that linked Brazil to Milan, the Maracanã to San Siro, the sun's rays lighting up the Corcovado and the fog that envelops Piazza del Duomo in the early hours of the morning. Until today. Until the arrival of Sao Paulo’s new favorite son with the famous Apelido (nickname) – because Gabriel Barbosa is nicknamed "Gabigol", which says all that needs to be said about what he was and will be.

Starting with his achievements in the Santos youth team, with some saying that between 2004 and 2012, he scored an unknown number of goals (no less than 400) at the Academy of Peixe, to which he came as an authentic Fútsal legend from his native favela, Parque Seleta. It was during a five-a-side football game that, as an eight year old, he would be noticed by the legendary Zito. Zito took no time at all to strike a deal with his father – an avid fan of the Vila Belmiro team who was determined not to let his son settle with his team’s historic arch-rival, Sao Paulo, with whom there was already a draft agreement on the table.

Just as it would not take long for the major European clubs to take notice of him: Paris Saint Germain, Real Madrid, Barcelona and of course Inter, thanks to the increasingly close relationship between Pirelli (main sponsor of the Nerazzurri during the 1995/1996 season) and Brazil, where the company has been present for 87 years, has four production plants and is the first to come to mind amongst male Brazilian soccer fans. 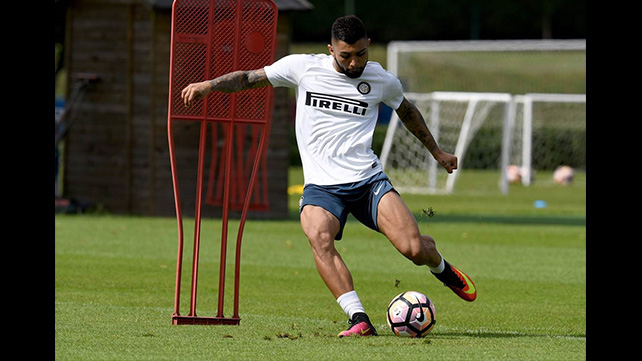 However, Santos had great plans for the boy: in 2012, the club set a release clause of 50 million Euros, an absolute record for a minor player. The reason is obvious: he is the heir to Neymar, who was about to land in Europe. The handover took place on May 26th, 2013: O'Ney had recently announced his move to Barcelo-na and, on occasion of the match against Fluminense (which ended with 0-0 draw), Gabigol made his début in the first team. It only took a couple of months for the first goal to mark his entry: a venomous left kick in the team’s 2-0 win against Vitoria, six days before his seventeenth birthday. And this was just the first step of a journey that led him to undermine Neymar’s records in terms of precocity: between 2013 and 2016, with 56 goals in 154 games between Brasilerao, Copa do Brasil and Paulistao, a tournament that Santos won twice in a row in 2015 and 2016, and that, on February 1, 2014 (during a 5-1 win against Botafogo), Gabigol would score the 12,000th goal for the meninos da vila in the history of the competition.

It follows that it would not take long for him to become one of Brazil’s most recognised players: with his flair and powerful left kick at the service of a compact physique (1.78m to 68 kg) merging to create just the right mix of technique and power to allow him to play virtually anywhere on the front line of the attack. These qualities would earn Gabigol his position in the National team (along with his goals, of course) on May 29 during the friendly game against Panama and his call up for the next edition of the Copa America in its cen-tenary year. And even during the most important South American tournament, he would find the time to make his mark in the 7-1 second game against Haiti.

Brazil, however, had already been eliminated from the group, but Gabigol would still find a way to make amends. Just one month later, together with Neymar – who had passed him the baton at Santos –, he would be named among the protagonists of the first Olympic gold in the history of Brazilian football at the Games in Rio. When, on the night of the final against Germany, the spectra of Maracanazo and Mineirazo were di-spelled by the joy and relief of an entire people. For Gabriel, there was the satisfaction of one of the high-est forms of recognition for a sportsman: the knowledge that he had contributed decisively with two goals in the game against Denmark (which finished 4-0), which got his team through to the quarterfinals of the tournament.

Then came the carousel of the soccer market with requests from all over Europe, and the deal with Inter, which would be finalized on August 30. It could not have been any other way: just like Pirelli – which has long been engaged in a major Talent Review focused on identifying the most suitable profiles to be entrust-ed with the company’s future fortunes – Inter has also decided to focus on young talents in a medium - to long-term approach to the team’s sporting development to give them the opportunity to grow, improve and improve themselves, in football as in life, since the former is often a metaphor for the latter, with one of the largest Italian communities abroad to act as a bridge between two countries that are so far from and yet so close to one another.

A young guy like Gabigol, who despite having grown up in the extreme poverty of a favela in Sao Paulo made it onto one of the most important stages of international football on the virtue of his own ability, per-fectly embodies this philosophy. To him, therefore, the task of guiding Inter from the present into future and beyond, with an Apelido that already embodies a program unto itself, and Milan and Brazil coming closer than you could ever imagine.

Javier Zanetti:
someone to run with