At Hangar Bicocca she inaugurated the great personal exhibition of the artist with Italian roots: installations made of light, and also of landscapes, volcanoes and abandoned industries

Home life Rosa Barba, the eye
and the space

Entering Rosa Barba’s world means taking a trip through images, lights, sounds, either real or maybe unreal places.
That happens also in “From Source to Poem to Rhythm to Reader”, the great personal exhibition of the artist with Italian roots, set up at Pirelli Hangar Bicocca from the 5th of May to the 8th of October. On exhibition, five movies unreleased in Italy realized from 2009 until today, and, in addition, a series of installations reminiscing all her poetry. «Pirelli Hangar Bicocca is a place that suits perfectly my narration» she starts off. «As often happens in my works, it is a space which used to be something else: the theme of how places change over the time has always fascinated me a lot». Barba’s artworks do not provide information or instructions to be read or understood; they are documentaries becoming works of fiction, or vice versa. Reality is intertwined with fiction, becoming on certain occasions almost science fiction. «You can understand the meaning just by looking at these artworks», states Marco Tronchetti Provera, Pirelli HangarBicocca’s president. «What’s important is to try to adopt the eye of a person who can understand details that elude us». Rosa Barba’s geography is both social and urban, from the landscapes surrounding her she draws inspiration for her works. At the center of Pirelli HangarBicocca’s area dedicated to the exhibitions there is the artwork called From Source to Poem (2016), featuring Pirelli HangarBicocca and CAPC musée d’art contemporain de Bordeaux, in collaboration with Tabakalera, Donostia, and developed in Culpeper’s Library of Congress (Virginia). «It is an immense archive where nobody can enter», says the artist.  «I liked to carry out a sort of investigation about a place that is of utmost importance yet unknown, a mysterious universe, in which a squashed knowledge is squeezed, and it creates a sort of white noise». 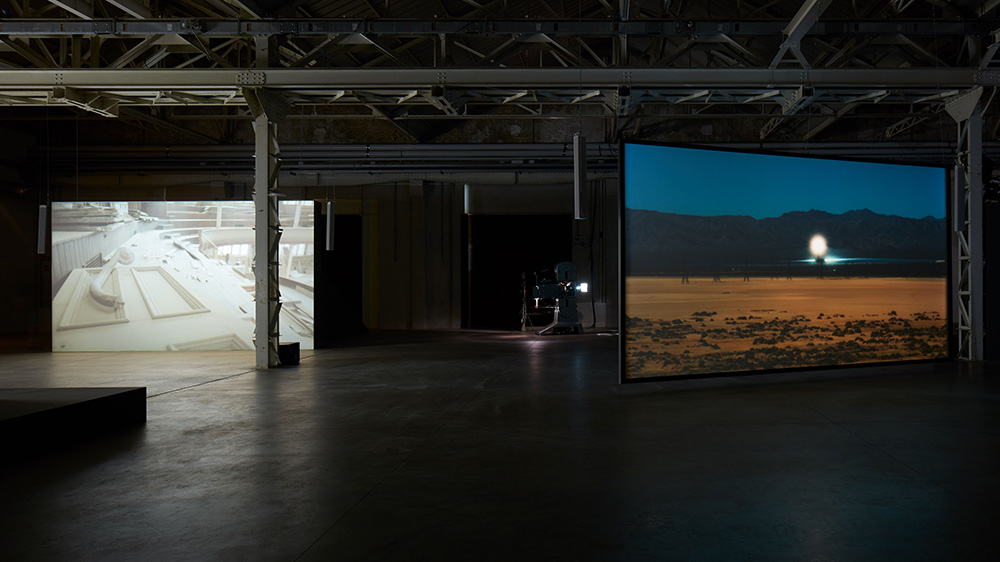 Every place Rosa Barba passes through turns into a starting point for a consideration. «In Alexander Calder’s atelier, in Connecticut, several artists have been brought together by Calder Foundation to reflect upon the legacy left by their eminent colleague. The main character of Enigmatic Whisper (2017) became in fact the atelier of the great artist, which was the same as it used to be when he worked there. Also the sounds recorded during the shootings have been used as the basis for the movie soundtrack». There is an Italian main character too, among the films on exhibition. It is the Vesuvio, at the center of The Empirical Effect (2009): at the foot of the Volcano it is possible to see the people who survived the last eruption, still living in that red zone. «Every character in front of the camera gave a new interpretation of that place, showing his/her emotions, from fear to trust in the future», tells Rosa Barba.
Lights and shadows chase each other in the space, chased by writings, signs, scattered film parts creating hypnotic choreographies. «I love the signs left by the mankind in the space, testaments of a past which often we cannot read anymore. I use the camera just like it was a tool to draw, to leave other signs of our present». Under these signs the heart of diverse stories pulses. For Subconscious Society, A Feature (2014), the filmmaker went to the United Kingdom to unearth industrial revolution’s ruins. In an abandoned Manchester building, once a theatre, a cinema, a center for political activities, and even a church, she talked to the people who used to spend time there, and who, in turn, converse with things come from the past, which today are not useful anymore. This is the analogic past versus the digital present, another pillar of Rosa Barba’s poetry, who inserts in her work personal experience, too. Just like Perpetual Response to Sound and Light (at HangarBicocca) (2013/2017), a receptive and bright structure activating thanks to the dialogue with external factors, like a train passage. «I have brought to Pirelli HangarBicocca this installation born in Texas in 2013. At the time I lived at Marfa’s Chinati Foundation, and in my office there was a big window from which I could see the trains pulling in and out. I did know neither where they went, nor what they carried. But, when the sun went down, their beam of light illuminated the space where I worked, changing it. The idea of analyzing how places mutate according to the light and to what comes from the outside was born out of there. It was an installation conceived for that particular place, but any place may be transformed. I am happy that now is here».

The mystery of
Kiefer’s Towers