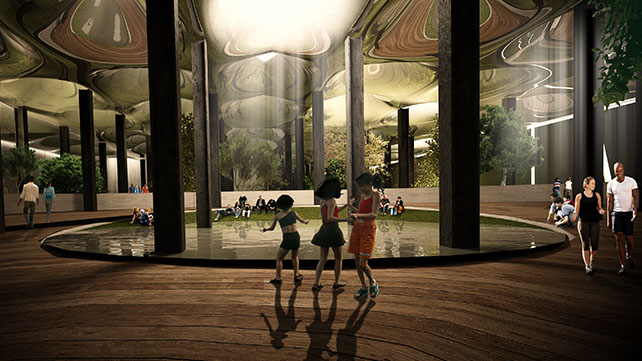 Technology and innovation at the service of nature: the new frontiers of architecture exalt, enhance or mimic the surrounding environment. From underground parks that recreate ecosystems to buildings completely covered in vegetation, nature is at the centre of a new way of thinking and conceiving spaces: a prolific symbiosis built around constructions camouflaged by drapes of vegetation, green carpets that become rooftops to walk on and places of socialisation. These trends originate in environmental policies, but also in technological developments: it is in this combination of environment and technology that encapsulates the quotient of innovative architecture. This is what lies at the root of projects that aim to increase the presence of natural elements in cities, while also reassessing unused resources.

An interesting case of sustainable architecture is represented by houseboats like the WaterNest 100 building in London, which self-supplies its energetic requirements thanks to 60 square metres of solar panels on the roof and is made exclusively of recycled and 98% recyclable materials. A similar approach has also given life to Bobbing Forest, a project by artist Jorge Bakker that sees 20 trees on floating buoys anchored to the bottom of the harbour bay of Rijnhaven, which recently opened in Rotterdam.

A striking example of this kind of exploitation of nature is represented by the Marine Organ on the Zadar waterfront in Croatia, which uses sea waves and solar energy to continually produce new sounds and images. Designed by the architect Nikola Bašić, this construction has turned an area of the city that had been abandoned following the post-war reconstruction period, into a musical instrument. Under the stone stairway, which is divided into seven 10m long sections, are 35 polyethylene tubes of different lengths, diameter and inclination, that allow the passage of water and air to produce a different sound according to the wind and sea conditions.

To favour the evolution of nature also means building in symbiosis with it, so that it is nature that encloses the spaces, not the spaces that impose upon nature. Grace Farms in New Canaan, Connecticut, is a natural habitat of 80 acres with wide-open lawns, plants and trees, woods, ponds and more than 16 different species of amphibians and reptiles. Inspired by the Japanese SANAA study, within this air-filled green idyll is The River, a place where nature, art and the community can come together and, in constant contact with nature, give life to creative experiences and cultural activities. The lightweight, minimalist design of the building merges with the forms of the territory, its forms flowing like a river through the natural area. In fact, the curves of the superstructure recall the evolution of a river flowing within the park, becoming a continuous, fluid element.

Southern Sweden is home to the "Uppgrenna Naturhus", a real greenhouse-home: a house that produces food rather than waste, and generates energy instead of simply consuming it. It is a place where time is marked by climate flows of sun, rain, wind and soil, where architecture is constantly influenced by the environment. Designed by the architect Bengt Warne, who believes that living in a greenhouse constitutes the fourth dimension of architecture. The greenhouse allows one to preheat the air required for the ventilation of the house and offers the possibility of growing plants that require a more gentle climate. Furthermore, the recovery of nutrients from wastewater (nitrogen and phosphorus), re-evaluates water quality parameters. By harnessing nutrients in the slurry produced by the property, the greenhouse is even able to cultivate certain products, showing how a system is capable of generating food and warmth, rather than simply consuming it.

Toyo Ito, winner of the 2013 Pritzker Award – the world's most prestigious architecture prize – owes his popularity to his ability to create buildings that merge with natural elements, to the point of obscuring all human intervention. His Grin Grin Park is one of the projects that best demonstrates this approach: built on an artificial island near Fukuoka, Japan, it echoes the shape of a shell surmounted by a walkable green roof. Grin Grin Park covers more than 5000 square metres and is divided into three main sections: an area where people can relax surrounded by vegetation, a display area with the rarest subtropical plants, and a space dedicated to workshops on the study of nature and vegetation. Here, architecture dissolves into the landscape by creating green spaces. The form chosen by Ito recalls nature and its constant transformation. In fact, the work’s concept is related to the mutability of the ground and echoes the typically organic forms of living beings.

The Eden Project in Cornwall, UK, is a unique project in its kind, aiming to recreate the complexity of the plant world in just one place. In 1999, when the Eden Project was started, it was an old abandoned quarry. Today, these three immense hemispherical greenhouses known as "biomes” are home to one of the largest biospheres in the world: more than 100,000 plants from around the world reproduce forms of plant life that range from the tropical forests to the flora of the Mediterranean.

Into this world of natural wonders created by a human synergy with technological advances, fits the spectacular design of the world’s first underground park: The Lowline. Located in a district of New York famous for a complete absence of vegetation, Manhattan, the park’s official opening is planned for 2020. In order to promote the magic that the park is destined to make, the designers created a laboratory, the Lowline Lab. The Lab houses a botanical garden of more than 60 species including pineapple, mint, thyme, strawberries, mushrooms, tomatoes and basil in order to show the potential of the underground park and experiment with the growth level of the different types of plants underground. The project was inspired by James Ramsey’s desire to create a true natural wonder beneath a busy and bustling metropolis. Ramsey, along with co-founder and executive director of works, Dan Barasch, has created a system capable of transferring solar power to the underground spaces of the Lowline to make them perfectly suitable for the cultivation of plants. . "The best time to plant a tree is twenty years ago," said Confucius. "The second best time is now".