Porcella “Surfing is about harnessing the power of the wave”

Porcella “Surfing is about harnessing the power of the wave”

That he would become a champion was written in his destiny. Francisco Porcella just had to choose which sport. He made up his mind at the age of 14 when he picked Hawaiian waves over football pitches. A choice like this was far from predictable for an Italian youngster who was already wearing the Cagliari jersey and could have sampled the thrill of playing in major Italian stadiums, such as San Siro or Delle Alpi.

As a child, seeing the colourful sails of windsurfers jumping on the waves of Maui was the turning point. He would often follow his sports reporter father on his trips to comment windsurfing competitions. And that was when he fell in love, but with the waves, not the sails. “I always wanted to tame them”, he said. Today, he is one of the few in the world to have won the Biggest Wave Award for having ridden a 22-metre tall wave. 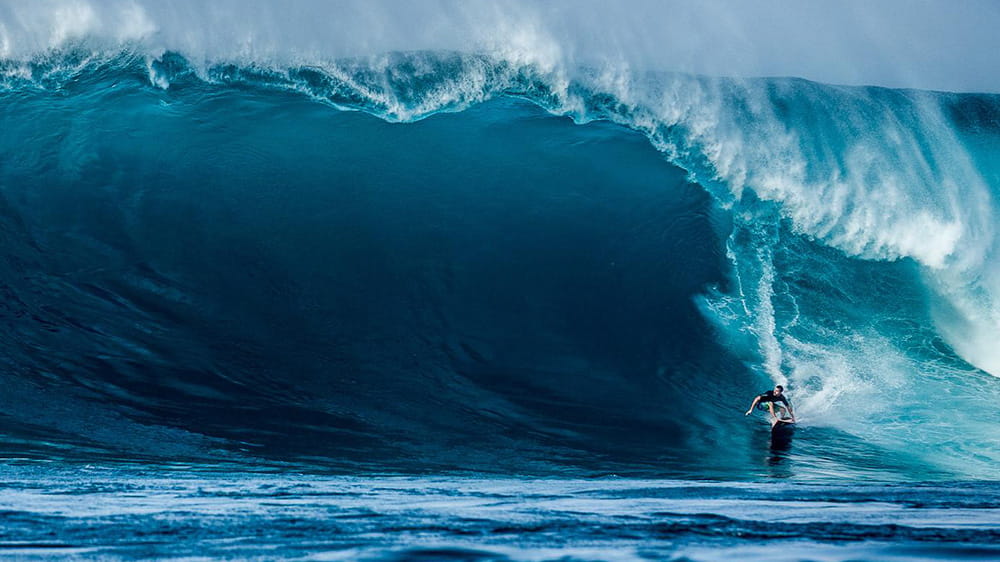 When did it all start?

I started in Sardinia in Capitana, Oristano and in the Iglesiente area. In those days I was playing football in Cagliari with many friends who went on to become professional footballers. As soon as I could, I would run off to the sea and surf with my brother. We caught the bug from our father. He’d been to Hawaii 20 times before. My brother was born there. I was born in New York. When I was 14, we asked him to move to Maui.

And did he reply as any other father would have?

No, he believed in us and we all set off for Hawaii. For a living, he revamped the Aloha Classic, a famous windsurfing event that had not taken place for some time. We bought a house and stayed there for five years. When my family returned to Sardinia, I started to travel the world to chase the waves.

When did you realize that that was your calling?

I was in Hawaii, in Maui, in a place called Jaws, because the waves formed here resemble the jaws of a shark. The swell starts like an open mouth and then closes. I started surfing the small waves and then went bigger and bigger. There were some that could only be ridden on water scooters, or at least that’s what we thought. That day in 2011, however, after several years of attempts, we tamed them with the strength of our legs and arms. We were about ten of us in the water. Shane Dorian, my idol, was with me. We managed to stand up and then we realized that we could ride those waves. I had been admitted into the circle of those who could.

Then you never stopped until the feat in Nazarè...

My most important accolade came in Nazarè, Portugal, in 2017, when I won the Biggest Wave Award for riding a 22-metre wave. That is like flying over an eight-story building. I had been in the finals several times, but I managed to win that year. Now I want to keep on. There are 30-metre waves out there. My dream is to win the Big Wave Surfing World Cup or at least one of the stages.

But how do you succeed in staying up there on top?

There are times when you know you can’t do anything against the power of the wave and other times that you know you can do it, that you become one with the wave and your board. Before going up, you need to read the wave to understand whether it will stay open or whether it will close because if it closes it will steamroll you. You need to know the wave is the right one and once you’ve figured it out, you’re in, nothing can stop you. When you’re riding it, it is essential to control the board at extreme speeds. You know you will succeed when you’re in full control of yourself, when you feel confident. It is 30 seconds for you to give it your all.

And how do you achieve it?

It takes a lot of training, especially in the gym and swimming. But autogenic training and mental preparation are equally important. You know that the wave can wipe you out. You must be ready to be swallowed up and you must train to stay underwater. You need good lungs but also a good mental space. The real trial at the end are the seas and the swells.

What is your relationship with the sea?

I have a great deal of respect. Surfing the waves is a crazy experience, you feel all the power of the sea and how small, how insignificant you are. You have the ability to ride the waves that allows you to become a part of the wave. You are happy because you are in touch with Mother Nature. Few people in the world can experience this feeling.

What was the most difficult moment of your career?

Two years before I won the BWA, I wanted to give up. I had been on top, among the best, for eight years but I couldn’t win a single title. I lost my sponsors. I was alone and I was scared. My mother advised me to go back to school. But I kept on believing. I believed in my passion and in my desire to pursue the dream. I saw my potential, I held on and I believed in it to the end.

Miani, “The journey is driving pleasure”