Lucio Fontana succeeded in doing what other artists have always tried to do: breaking down space. In 1949 he pierced the canvas for the first time and in 1958 he cut it, breaking through its surface forever. And the irreversible and transgressive nature of the artist’s sudden and unprecedented act expressed all the revolutionary power of a brilliant flash of inspiration. Fontana crossed the insurmountable horizon of two dimensions at the exact moment in which the twentieth century had disrupted all the former cast-iron certainties by engaging with the theory of relativity, research on quantum mechanics, non-Euclidean geometries and the uncertainty principle. It is no surprise, therefore, that the cosmos and adventures in aerospace were so important for the founder of Spatialism: he created his first Spatial Environment in 1949 as humanity was turning its attention to the skies. In the previous four years, the launching of missiles and a considerable number of aircraft to look down on the Earth had also been accompanied by the first astronomical observation of space and the discovery of the first radio galaxy, magnetic star fields, the dusty and frozen state of comets and the satellites of Uranus and Neptune. The asteroid Icarus, the presence of CO2 on Mars and the irregularity of the Moon’s surface were also identified. Bestriding the many scientific discoveries of the era, Fontana - attracted as he was by novelty - always worked with materials like plaster, ceramics, paint, neon and Wood's light, and he experimented in depth with the concepts of space, light, emptiness, the cosmos and matter, revolutionizing their essence; he changed the traditional conception of sculpture and, above all, achieved immortality by going beyond - as his admirers know - the two-dimensionality of painting. It was also within this study of space that - together with his better-known works that are always given more attention - Fontana’s Spatial Environments also emerged. Conceived from 1949 onwards and continuing until his death, through these highly innovative environmental works Fontana established a relationship with the architectural spaces of experience. This involved the designing of rooms and corridors for galleries and museums and installations in the lobbies of apartment buildings or cinemas, which at the end of an exhibition were nearly always destroyed and dismantled. Only one of the original Environments remains. 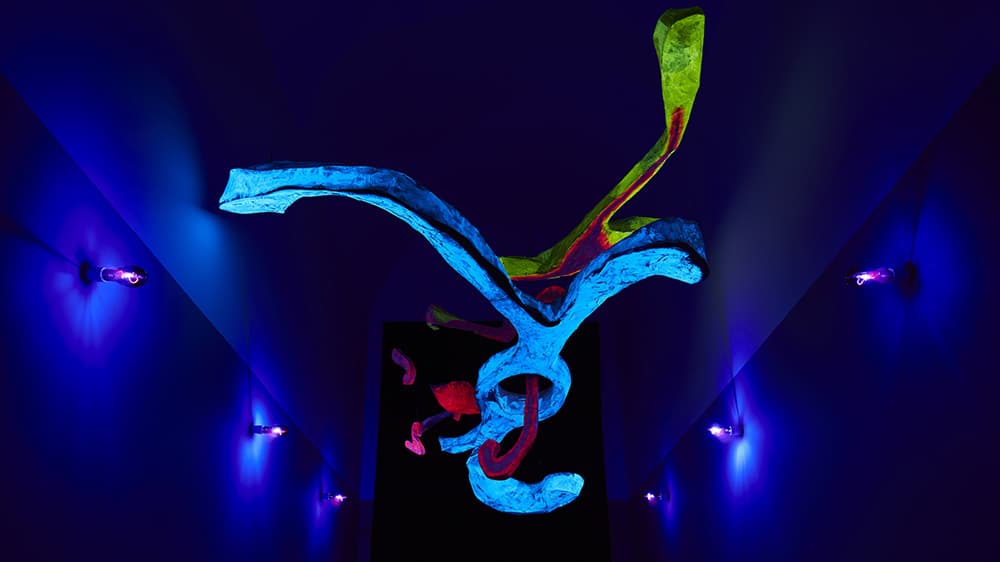 In a masterpiece of philological study, material gathering - from the archives of the Fondazione Lucio Fontana - and reconstruction, the art historian Marina Pugliese, the art restorer Barbara Ferriani and the Pirelli HangarBicocca artistic director Vicente Todolì recreated and chronologically reunited nine of Fontana's Spatial Environments and two environmental works along the PHB aisle at the Ambienti/Environments exhibition.

This unprecedented installation, exhibited from September 2017 to February 2018, set out to reaffirm the modernity and innovative strength of the artist's experimental journey, and it has now received great recognition by winning the 2018 Global Fine Art Award in the “Best Impressionist and Modern” category.
It was Fontana himself who drew a distinction between his Environments and his spatial interventions: the former are works isolated from space, rooms within which a very precise relationship exists between objects, lights, their constituent materials and the surrounding space; the latter are works commissioned by architects for open spaces that have an open relationship with space and do not imply the idea of being enclosed in a container.

Each work is presented in rooms that have been specifically reconstructed to respect the original dimensions, and each room is a space that can be walked through and experienced by the visitor. Opening the exhibition is Struttura al Neon, designed for the 1951 Milan Triennale: a luminous arabesque with over 100 meters of neon tubes. “With the resources of modern technology we’ll make artificial forms, wondrous rainbows and luminous writings appear in the sky”. This is what Fontana did, for example, in Ambiente spaziale a luce nera (1948-1949), creating a dark space in which fluorescent-coloured painted objects in papier-mâché were hung and illuminated in Wood's light. Relationship takes the place of contemplation, with alien-looking fluorescent shapes in a work that is neither sculpture nor painting but a medium through which the artist is working on the physical and visual perceptive confusion of space and the centrality of light. What remains of this exhibition, along with its reconstruction of the various Environments once designed by Fontana and the painstaking work devoted to reproducing them as faithfully as possible, is a realisation of the extent to which Fontana’s work succeeded in acting not only on space but also on time, with a reception from today's audience that is more correct than that of yesterday. The Global Fine Art Award received in New York is proof of this.