Now online: texts, pictures, images and audio-visuals owned by the foundation. An artistic and cultural value available to everyone!

Three and a half kilometres of photos, periodicals, books, sketches, paintings, corporate documents, and other projects. That’s how far the Pirelli Historical Archives would stretch if laid out in a row, one page after another, in a sort of pathway through the history of Pirelli’s business and its cultural heritage, all the way back to 1872. It is a collection of documents that the Italian government has said is of great historical interest, and the archives are visited by thousands of people each year. 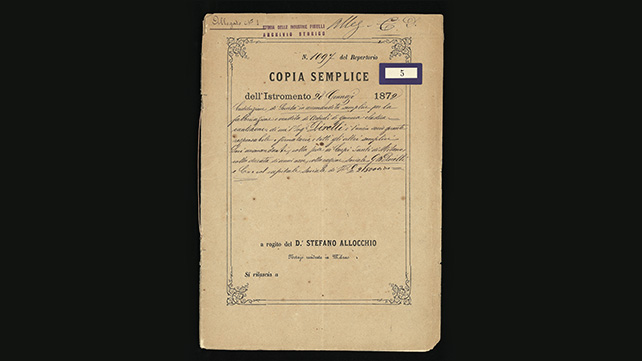 In 2009, given the great historic and cultural value of the Archives, Pirelli and the Pirelli Foundation began categorising and digitising all of the materials documenting over 140 years of the organisation’s history. The entire digital library was published online in 2015 and is periodically updated for all to enjoy.

The project makes these texts, images and information, all of historical importance—including advertising campaigns by some of the greatest artists of the 20th century, writings by famous authors published in Pirelli corporate periodicals, contemporary films, and a range of corporate documents—available to cultural organisation, schools of all levels, and the general public.

Divided into five categories, the Archives are available online at http://search.fondazionepirelli.org/ and feature an entire section of documents from the history of Pirelli Industries, including the company’s deed of incorporation from 1872. The section dedicated to photography will contain roughly a million images of products, factories, trade shows and exhibitions, fashion and design, corporate events, vehicles using Pirelli tyres (including cars, motorcycles, bicycles, aircraft, farming equipment and other industrial vehicles), and motorsports that feature Pirelli tyres. The section of drawings and posters contains an extensive collection of original sketches by famous artists, illustrators and graphic designers from the turn of the century on up to the 1970s, commissioned for product marketing and for illustrations in the Pirelli magazine. This section features thousands of advertisements—including posters, catalogues, pamphlets, and window displays—by some of the most famous Italian and international artists, such as Giuseppe Cappadonia, Alberto Bianchi, Giorgio Tabet, Bruno Munari, Alessandro Mendini, Bob Noorda, and many more.
The section of audio-visual material includes hundreds of films (both on actual film and on magnetic tape) from 1912 on up to the 1990s, such as: videos by Luca Comerio, one of Italy’s greatest filmmakers of the silent-film era, of King Vittorio Emanuele III visiting the Bicocca facilities; advertising for cinemas or television by masters of Italian animation (Pagot and Gavioli); and even the latest TV commercials. All this material covers a crucial time in the history of multimedia communication, from the origins of cinema to the rise in popularity of television.
Finally, the section dedicated to company periodicals enables visitors to flip through the famous Pirelli magazine of information and technology, which was a (mostly) bi-monthly periodical published from 1948 to 1972 and was available at newsstands. Pirelli, the magazine, served as one of Italy’s most advanced forums of cultural debate for over two decades, featuring writings by famous authors such as Giulio Carlo Argan, Dino Buzzati, Italo Calvino, Gillo Dorfles, Umberto Eco, Arrigo Levi, Eugenio Montale, Franco Quadri, Salvatore Quasimodo, Alberto Ronchey, Elio Vittorini , and dozens of others, and illustrations by artists of the calibre of Renato Guttuso, Ernesto Treccani, Renzo Biasion, and Fulvio Bianconi. Vado e Torno, first published in 1964 for tyre retailers and trucking companies, will also be made available online in the near future.

Designed for in-depth research for both work and study and kept constantly up-to-date with new material, the site provides both a general search function for the entire digital library and specific search forms for each section.

The site’s “faceted search” system makes it easier to find the documents desired, and open-source file viewers make it possible to view photos and videos on any device or web browser. The site also features responsive design, so that content is optimised for all devices (i.e. computers, smartphones, or tablets), and a range of technologies specifically designed for archive management, navigation and search, and video reproduction.
The entire catalogue of the Pirelli Historical Archives is available in both English and Italian and represents an example of excellence in online corporate archive