'With eyes closed' is the historical 1961 campaign for the Pirelli Cinturato. Immediacy and irony; these are the keywords of the illustrations!

With hat on head, hands firmly on the steering wheel, eyes closed, covered by the Pirelli Cinturato, and off we go, in safety, along the roads of the world! 'With eyes closed', the historic 1961 advertising campaign for the Pirelli Cinturato, conveyed the idea of the safety of Pirelli tyres in an immediate, humorous way. The simple little man portrayed by the painter and illustrator Riccardo Manzi is the image chosen for the cover of the book “The Muse in the Wheels. Pirelli: a Century of Art at the Service of its Products”, because it perfectly illustrates the new trends adopted by Pirelli communication in the decades immediately following the Second World War. Power, immediacy, beauty and humour were just some of the distinctive features of the campaigns in those years. 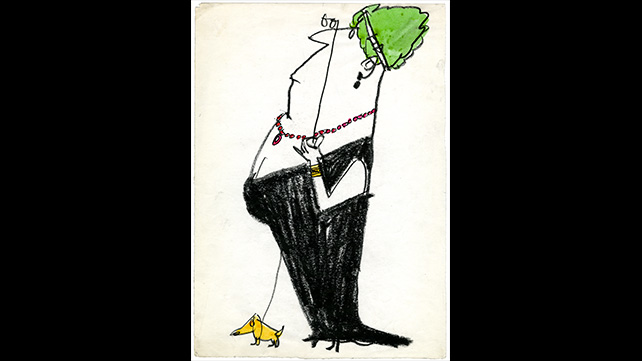 Riccardo Manzi (1913-1991) worked assiduously for Pirelli, having joined the company back in the late 1940s. It was the 'engineer-poet' Leonardo Sinisgalli, one of the founders of Pirelli magazine, who took him into the entourage of artists who were working at the time in the corporate communication sector. These included such illustrious names as Bob Noorda, Max Huber, Raymond Savignac, Pavel M. Engelmann, Albe Steiner, Armando Testa, Bruno Munari and Giulio Confalonieri, to mention but a few.
Manzi's was a minimalist, unconventional style. He created countless advertisements for Pirelli, in which his fantasy turned tyres into umbrellas 'for snow and ice', as in the BS3 campaign of 1960, or into 'enchanting eyes' able to see into the distance, as in the Pirelli Atlante advertisement of 1961, or even into elegant ladies' hats, as in the Pirelli Cinturato advertisement of 1962. Through his playful and apparently childlike vision, Pirelli products entered a world of fantasy, in which a man taking a shower could stretch out his arms endlessly to take a Pirelli sponge or where a mattress turns into a sort of flying carpet to ensure 'sweet dreams' even outside one's own room.
Manzi also created many illustrations for Pirelli magazine, an outstanding example being the caricature that accompanied the article entitled 'The Directors' Syndrome'. With no lack of brainpower and his cogwheels constantly in motion, he has no end of numbers ready to trip off his tongue at the right moment. With enormous power of expression, he managed to turn into images the exertions required of a manager, called upon to strike a balance between professional responsibilities and private life. To give another example, it was he who created the humorous cartoon entitled 'Elixir of Life' which, as the subtitle says, tells the 'story without words of a recalcitrant stomach and of a sick man who found his panacea', thanks to a Pirelli hot water bottle.
Manzi's simple little figures look like cartoon characters and it is no surprise that Pirelli decided to bring them to life, turning them into amusing animated commercials. It was this that led to the Pirelli 'Diavive'. This was an effective new form of advertising that allowed retailers to personalise very brief Pirelli tyre commercials in colour with their own name and address.
The artist's family of whimsical, amusing characters in the Pirelli Foundation collection has recently expanded, with the acquisition of 5 new original works.