Pirelli Cal 2016, taken by Annie Leibovitz, has been presented at the Roundhouse in London. An evening of music, celebrities and photographic art 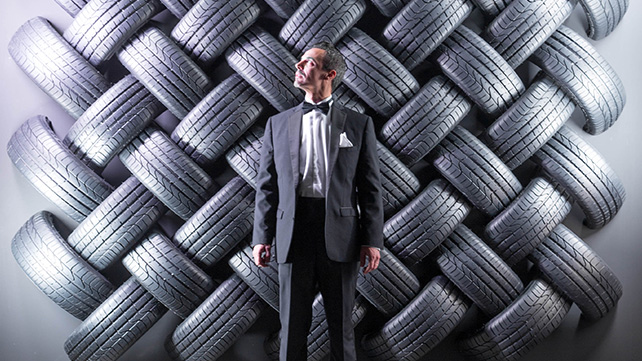 "This is our world, which moves with you.” That is the message that concludes the performance by Tumbellina International, the group of dancer-acrobats who use shadow play to shape their bodies to "build" a Formula 1 car, a roaring motorcycle, and various scenes of everyday life showing the eclectic world of Pirelli. Transformations and choreography that provoke gasps of astonishment. In the theatre are 800 guests, invited for a dinner celebrating the 2016 Pirelli Calendar, its 43° edition.

The setting is London’s Roundhouse, a temple of rock since the mid-60s and the place where David Bowie made his debut. Its cast iron columns, typical of mid-nineteenth century Art Nouveau industrial architecture, have provided the backdrop to shows by The Rolling Stones and Pink Floyd, Jimi Hendrix and Led Zeppelin. This is the stage where the show for The Cal 2016 came to life. And music is the unifying theme of the entire event. Starting with the words of the famous musical poem "Imagine" as the audience takes their seats.

Providing a pacy start to the presentation is charming two-time Oscar winner, Cate Blanchett. "Sorry, Annie, but why didn't you call me? Look, I would have been happy to take part," jokes the Australian actress to Annie Leibovitz. The photographer has returned to shoot the Pirelli Calendar after 15 years, creating an edition that she defines as "brave, rational and different." Leibovitz embraces her friend, thanks her for breaking the ice with a joke and allowing her to duet for a few minutes in the spotlight, and tells the audience about

The decision to feature a series of committed women who have distinguished themselves, all depicted naturally and without artifice

With her in the room are the Chinese actress Yao Chen, the President Emerita of MoMA Agnes Gund and the blogger Tavi Gevinson, founder of the online magazine Rookie. Three of the women who participated in the project. All clearly moved to be reunited to watch the mini-movie that tells the story from backstage to final print, showing how Natalia Vodianova, Fran Lebowitz, Serena Williams, Yoko Ono, Ava DuVernay, Shirin Neshat, Patti Smith, Amy Schemer and Mellody Hobson were also unable to resist the appeal of a project realized for Pirelli by Annie Leibovitz. And how they all went to her studio in New York to join in with a passion.
Music is an essential ingredient of any night at the Roundhouse. The notes that open the evening come from the guitar of Asaf Avidan, accompanying his pitch perfect vocal chords as they vibrate in the stunned silence of a room containing collectors of the Calendar from Lapo Elkann to celebrities like Geri Halliwell and Eva Riccobono.
The finale in dance mode is a celebration of both feminine commitment and the essence of feminine glamour. And there to fill the dance floor is the queen of the genre, Gloria Gaynor. Bow ties and high heels oscillate wildly as the party goes on into the wee small hours. It's raining in London and that's just fine. Another chapter in the long history of the Pirelli Calendar has been written.

Pirelli Cal 2016, taken by Annie Leibovitz, has been presented at the Roundhouse...

Pirelli Calendar >
Pirelli #ChasingTheCal
​The exclusivity is not for sale. But it can be conquered...
Chasing the Cal >
What car do you drive?
​Set your car detail and discover the size range...
Fit on your car >