Advertising sketches, illustrations and photos: the book presents a vision of how Pirelli products can merge with artistic message

A muse in the wheels. Pirelli: a century of art at the service of its products is a collection of 450 illustrations and sketches by over 200 world-renowned artists, a book that looks at the relationship between manufacturing and creativity, between product and illustration, and a tale of making and of makers. What makes this collection unique is the spirit with which it was assembled. Embodied in Pirelli’s identity is a vocation to beauty and a way of looking at the factory and manufacturing in new and unique ways. 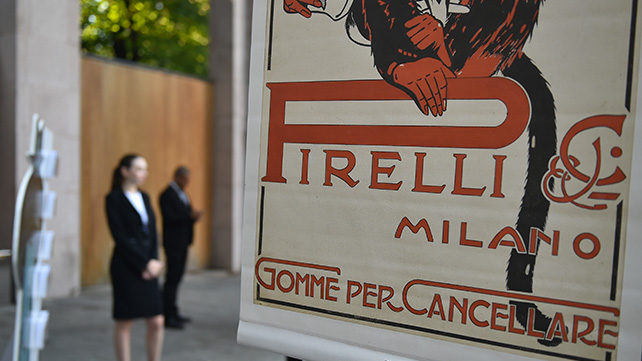 This is what makes the event to present A muse in the wheels an ideal place for such a diverse range of artists, including Alessandro Mendini (architect), Leonardo Sonnoli and Andrea Braccaloni (designers), names that are a part of the tradition of creativity that has gone hand in hand with the evolution of the city of Milan and its culture and which is, in part, the result of the driving force of organisations like Pirelli.
“It takes a great deal of creativity to create a business. Over time, creativity also plays an increasingly crucial role in the launch of new products, in taking on new markets, and in experimenting with new forms of organisation or communication. Pirelli has always maintained a rich, contemporary dialog with the worlds of art and design. This is reflected both in this book and in other recent projects in literature, music, theatre, and Pirelli films, and the involvement of both up-and-coming artists and big names to illustrate our annual report, to fill the exhibit halls of HangarBicocca, or to be featured in our Calendar,” said Marco Tronchetti Provera, chairman of Pirelli and the Pirelli Foundation, in presenting the book that looks back at a century of marketing and communication history, from 1872 to 1972. As a reconstruction of the works of art in which the organisation has played a leading role, it presents a vision of how product can merge with artistic message.
The book was presented at the Triennale di Milano with the help of an exhibit of some of the advertising sketches and illustrations from the Pirelli magazine and a brief history of the company’s rubber products. In honour of the city, there was also a selection of historical photos from Pirelli ad campaigns in locations that embody the spirit of Milan, photos which had never been released before now.
“Pirelli’s history is marked by a culture of enterprise that unites technological innovation and scientific research with the humanities and artistic experimentation, while promoting talent and international diversity,” said Alessia Magistroni, director of the Pirelli Foundation. So it is no coincidence when Andrea Braccaloni spoke of “Pirelli’s innovative, disruptive spirit” and the ability to “create something that didn’t exist before”, in reference to both the company’s marketing and advertising efforts and to the technical drawings of its products, which feature a surprising degree of creativity and aesthetic beauty. Leonardo Sonnoli also underscored the company’s forward thinking in involving creatives from both graphic design and “other cultural worlds”, such as journalism and literature. Alessandro Mendini, who plays a leading role in the book, recalled his personal and professional relationship with Pirelli and referred to A Muse in the Wheels as “a culturally challenging documentary of such great critical quality”.