Pirelli communications have always conveyed quality, innovation and experimentation. From the "artist" advertising in the early 20th Century to the creations by the leaders in Italian and international graphic design throughout the 1950s and '60s, from “Pirelli” magazine to the Centro agency - a truly unique advertising house agency offering a full service - through to the global campaigns of the 1990s, for over 140 years, Pirelli communications have marked the history of advertising and culture. The company historic archive, which is kept at the Pirelli Foundation, includes the testimony of an extraordinary visual communication heritage: hundreds of sketches and original designs, thousands of paste-up layouts and prints, hundreds of videos on film and tape. A heritage that the Pirelli Foundation protects and discloses via restoration work, digitalisation and cataloguing processes. 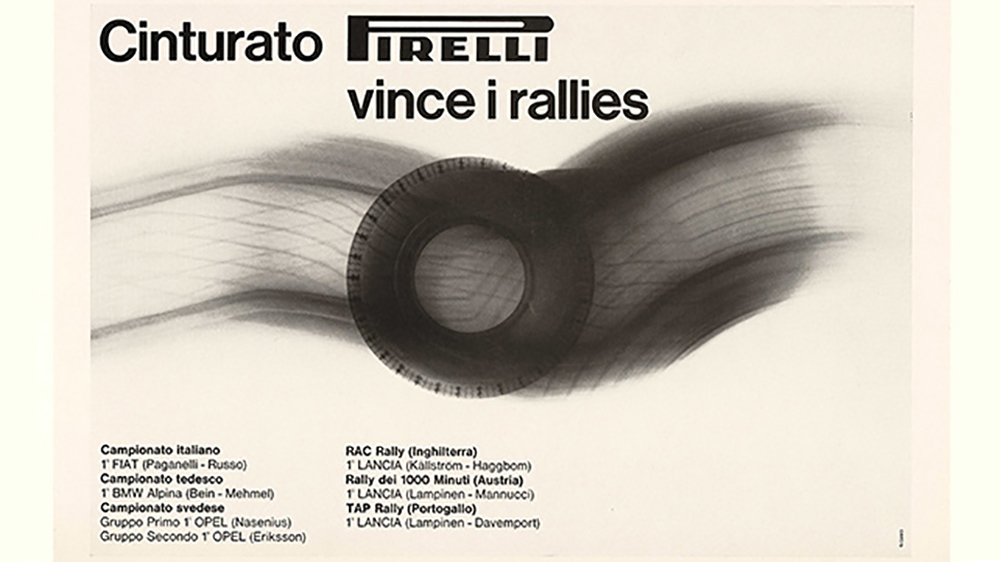 A smaller time frame but in no way less interesting. The volume of archive materials we have received is significantly more than this. The archive fund of the Centro agency (Pirelli Group's in-house advertising agency, which was in operation between 1960 and 1988) is made up of thousands of layouts and executive prints, created to advertise Pirelli products: tyres, cables and the myriad articles making up the “diversified products” sector (shoes, watches, mattresses, belts, tubes, to name but a few) also produced by subsidiary brands, such as Solari, Superga, Sapsa. The season of "designer" publicity, devised by more than 200 authors (many were identified between 1910 and the late 1960s), gave way to the season of advertising agencies, the biggest mentioned earlier, Centro, and then the major international agencies, such as Young & Rubicam and Armando Testa. In the background, epochal historic changes, which also affect the world of communications and advertising: the establishment of marketing theories, the onset of the digital world, the use of “testimonials”. Pirelli is at the cutting edge.In the 1960s, it experiments with unprecedented advertising strategies, which focus on the consumer first and foremost, making him or her the lead figure in the advertising campaign itself (such as the "Ti cerco, ti filmo, ti premio" (I seek you, I film you, I reward you) campaign in 1974, whereby the driver becomes the lead figure in Carosello; or in the Pirelli MotoVelo campaigns marked by a youthful tone, the language of comic books, gadgets and competitions to involve their target audience).1978 was the year of a campaign that could be defined as an epic undertaking in the pre-digital era: 140 cars used to compose the P of Pirelli, photographed by Adrian Hamilton from a height of 85 metres. In the 1980s, Pirelli experimented with the first graphic productions created on a computer, starting with “Pirellibility”, a TV advert made by the Cucumber Studio for the English Pirelli, referred to by the graphic magazines of the time as one of the first video advertisements entirely digitally-made; in the 1990s came the global breakthrough in Pirelli advertising, now concentrated into a single message for all its international markets and to the image of a endorsers from the world of cinema and sports : in 1993, Sharon Stone, following her success in Basic Instinct; in 1994, under the explosive headline “La potenza è nulla senza controllo” (Power is nothing without control), the campaign with Carl Lewis in stilettos was launched, and became a world-wide success destined to make the history of advertising; over the following years, other sports champions lent their image to Pirelli advertising: the sprinter Marie-José Pérec and the footballer Ronaldo. The volume also gives an account of the growing use of audio-visual advertising in the years in question.From the Carosello in the early 1970s, to the explosion of TV advertising in the 1980s - a host of different ads in the many countries where Pirelli is present - through to the TV ads in the 1990s, with the triumph of post-production special effects: Carl Lewis climbing up the Statue of Liberty, Marie-José Pérec running over lava, Ronaldo in the balance over Corcovado, posing as Christ our Saviour.

To allow the reader to enjoy audio-visual advertising - as well as a lot of extra contents - the volume is accompanied by an app and by a website, which can be accessed using the QR code or typing in the address advbook.fondazionepirelli.org. After a few initial essays dedicated to the historical context (Antonio Calabrò), to the international advertising context (Paola Dubini), to the evolution of techniques, languages and strategies in Pirelli communication (Carlo Vinti e Michele Galluzzo) and to the corporate image (Giancarlo Rocco di Torrepadula), the advertising campaigns are presented in the form of 800 illustrations (paste-up layouts, prints, photographs, video stills), split into institutional campaigns, social advertising (a sector where even Pirelli is at the cutting edge, with campaigns produced by the Centro agency to promote cancer research or sustainable mobility) and product advertising.Testifying to an historic period that had so far barely been explored, where Pirelli advertising confirms itself to be Publicity with a capital P

The man who has changed the way we look at art