Nurturing grassroots with the England Manager

In the UK, this includes backing the local football club Burton Albion by sponsoring its stadium, which sits just a stone’s throw from the factory. In turn, the club supports the local community through its own charity, the Burton Albion Community Trust (BACT).

Pirelli’s home city Milan of course has great football pedigree, with Pirelli having sponsored Inter Milan for more than 20 years, but Burton is also becoming something of a football hotbed. Not only is Burton Albion enjoying new levels of success – this season playing in the second tier for the first time – but the town is also home since 2012 to St George’s Park, the new training base for the England national setup.

And just as that complex hosts England’s 24 national teams, a number of local grassroots clubs will call the new community pitch ‘home’ including Stretton Eagles FC, Outwoods FC and Burton Ladies. It is predicted that 127 new teams will use the pitch over the next five years. In addition, the hub will house a huge range of sporting, educational and community programmes delivered by BACT. 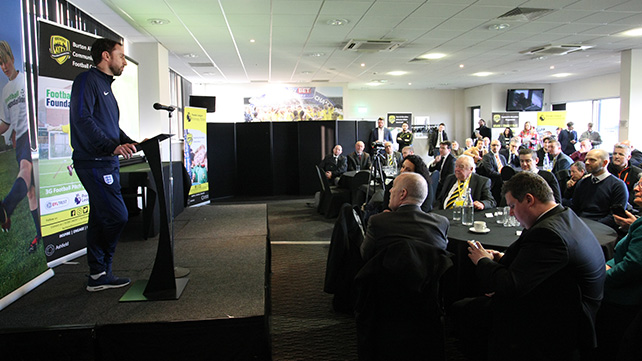 For Southgate, support for community sport is crucial. “Throughout my career I’ve always been a big supporter of the grassroots game, and state-of-the-art facilities like this one are its lifeblood,” he said. “Floodlit all-weather pitches allow football to be played all-year-round, irrespective of the weather. This means more people, more often, taking part in the sport.

“As a professional, I have been lucky enough to train, play and coach on some of the best facilities in the country. I believe that those who train, play or coach at the grassroots level should be afforded the same experience. That means building facilities like this one right across the country, something the Football Foundation continues to do, expertly.”

The new facility was aided by a grant from the Premier League and The FA Facilities Fund, which is delivered by the country’s largest sports charity, the Football Foundation, for which Southgate is an ambassador. Pirelli was also among local organisations who supported the initiative with a donation.

BACT Chief Executive, Andy Taylor, said: “This facility has only been made possible by the commitment and hard work of all our partners – starting with Burton Albion Football Club for allowing the development of this important new community facility at the Pirelli Stadium.

“As well as the Premier League & The FA Facilities Fund providing the major funding we also need to thank all of our local funders who have helped make this happen.”

Recently tasked with returning success to the national team having overseen the development of young players at lower levels, Southgate knows the importance of nuturing grassroots participation.

“Ultimately all future England players – whether it is the women’s teams, disability teams, youth teams or indeed in the senior men’s team – will start out and develop their skills in the grassroots game, and on grassroots facilities. So whether for pure enjoyment or for supporting the development of home-grown talent, the more of these fantastic sites we see built, the better.”

How to land in
a top Company