Jeison Murillo talks about his relationship with Inter Campus: “An experience which made me what I am; a hugely positive period in my life”

Jeison Murillo wears the gentle and amiable smile of someone at peace with life. He has, after all, crowned the dream which every boy nurtures with clarity while growing up. If today Murillo is one of the most highly-rated defenders in Serie A, he owes much of this to his development, and the way he has been able to bend to his will each stage in his personal story. The period of time when the paths of Jeison and Inter Campus crossed was an important part of this development process. While it is true that football has always been in his thoughts, the life of a boy in Cali does not always follow the straight and narrow path to happiness.

Murillo’s story begins in the barrio of Andre Sanìn, on the hot, mean streets of Cali. Jeison’s connection with football, as for every kid, is closely wrapped up with the calles, scorching hot and bursting with life. At school, outside the front door of home…any place where a ball could be kicked was an ideal location. He pursued his dream ever since he was little, and Inter Campus helped him believe he could achieve it, developing above all his human side, making him realise the importance of fighting for the things you love. Murillo is always very well-mannered, a humble winner, equally humble as the family he came from “where there was always food on the table, but you had to ‘forage’ every day to get it”. There’s something nice about the way Jeison uses this particular Spanish colloquialism for ‘forage’, for it conveys how at ease he feels talking about his past, while at the same time showing that his roots are solid enough for him not to have forgotten the quirkier aspects of his native language.

Murillo is one of the kids who, thanks to Inter Campus, has had the chance to experience a new aspect of life in his country. It was 1999 when the project arrived in Columbia, and Jeison was one of the very first individuals to experience the new Inter Campus programme; the boy had just turned 7, and for the next few months he would seek to develop and test himself against the world. Today the activities of Inter Campus involve more than 500 boys and girls aged between 6 and 13 in the area around Cali, the department of Nariño and the department of Chocó. The goal of Inter Campus in Colombia is filling the free time of children with safe and constructive activities and far from drug trafficking and guerrilla. “The objectives of Inter Campus go beyond mere football”, says Murillo with certainty. “Everything is organised around human beings, their personalities and the values a child needs in order to grow; above and beyond football, the purpose is to develop their full potential”. It’s clear that for them to be calm, kids must be allowed to do what they love doing the most. And what could be better than kicking around a rolling ball? “I believe that the activities that Inter Campus and Inter football club undertake are something exceptional, and it would be great if this kind of project could be found everywhere. During the months spent at Inter Campus we learned to count on ourselves always. They taught us values, values that are important for a person to have. We were very young, and we always tried to comprehend the good that was done to us”. 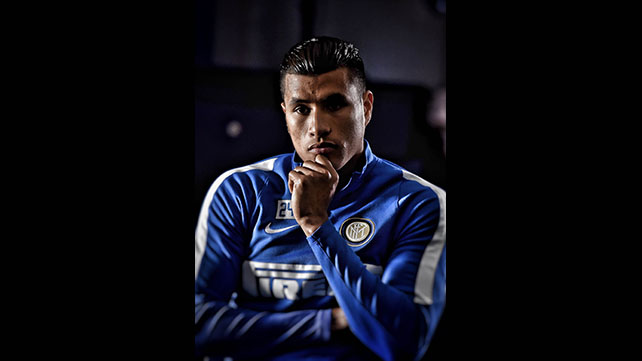 Murillo still remembers the occasions when the Inter management arrived at the Campus, times which first and foremost gave to the kids “a strongly positive atmosphere. They transmitted positive values that we then took home to our families, and into our daily life…we absorbed every moment. We waited anxiously for those people, they brought with them cheerfulness and innovation. For example it was fun when one of them tried to speak to us in a language we didn’t understand”. There were matches against Inter Campus teams from other areas, meeting other kids, also the times when we imagined ourselves wearing the Inter jersey one day, but all without any sort of obligation. Football has always been a dream and a passion of Murillo’s, but never an obsession.

When it’s time to think about the future, and what lies ahead after the end of his career, the defender opens up with a warm smile when imagining himself in the role of ambassador for Inter Campus: “It would be an honour for me. Whether it happens now or when I retire, for me it will always be an honour to help young people in need, always seeking to set a good example”. Because, at the end of the day, this is what really matters: “Teaching other people respect for themselves and for those around them, but above all humility; this is something it’s important never to lose. It’s what allow us to achieve great things, without ever stopping believing it possible”.

Javier Zanetti:
someone to run with