Hangar Bicocca presents the first Italian respective of Polish artist Miroslaw Balka, born in Warsaw in 1958. From 16 March to 30 July, a series of works made from the nineties up to the present day will be displayed in the darkness of the Navate building, along with a video made especially for the occasion. “It’s exciting to see my works installed in this space,” said Bal-ka, “And I’m sure not just for me. An exhibition is always a collective effort, since it results from the cooperation of many individuals. The artist may be the author of the works, but only the collaboration of a team makes an exhibition like this possible. And I think the intent of CROSSOVER/S is to look at these types of dynamics: individuality and collectivity, identity and anonymity, light and shadow, memory and oblivion, everyday life and history.” 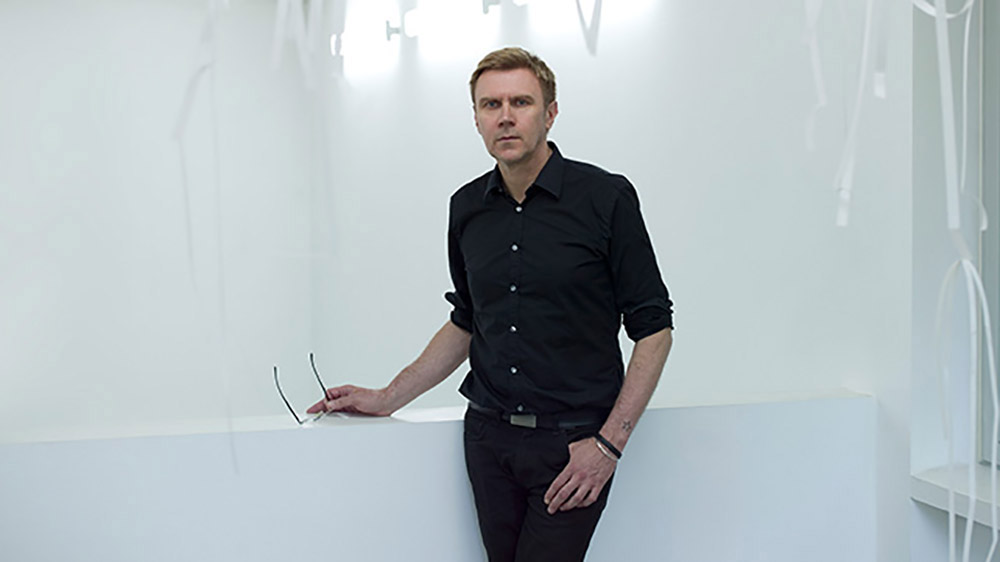 The most powerful, and at the same time, delicate piece is 7 x 7 x 1010, 2000, which Balka considers to be “the heart of the exhibition”. Used soap bars collected from the residents of Warsaw are stacked on top of one another forming a 10-metre pile. Seeing the silhouette of this fragrant column in the dark sacredness of the Navate space, strong and elementary at the same time, is an experience that connects onlookers with the most genuine aspects of their humanity.

CROSSOVER/S is an exhibition of crossings, the “in between”, as Balka explains, referring to the space visitors must cross to move from one work to another, from one “station” to the next. But the show is also linked to the motif of lines and verti-cality (recalling the great painting by Barnett Newman). Yellow Nerve, 2012-2015, installed in the Cube space, consists of a yellow wire that falls to the floor and shifts based on the movement of air caused by the viewers’ approach, capturing light and filling the vast space with its delicacy and fragility. Then there is To Be, 2014, a metal spring suspended in space, which gradually accumulates energy and alternates stillness with sudden movements, conveying a threatening sense of latent vio-lence.

Yellow makes a return in the piece Holding the Horizon, 2016, created especially for the exhibition. “In the myth, Atlas holds up the world. The figure of Atlas is based on an image of responsibility. When I think of the idea of holding the hori-zon, I think of the European horizon and our responsibility in the face of such a vision,” Balka explained. “The video, which casts a yellow line across a black background, is placed behind the visitors, meaning they are unable to see it when they enter the exhibition (normally when you walk into a place, you don’t look back). But then when they leave, the visitors no-tice the yellow line and realise it was always there, feeling part of a kind of cycle, or ritual”.

Unnamed, 2017, plays with the viewers’ perceptions, which involves all the senses. In this case, the curtain that separates the Navate space from the Shed is heated until reaching the average human body temperature (a central component of Bal-ka’s work, as he often includes his body measurements in titles – used to generate the size of sculptures and installations). Sense of smell also comes into play with the Soap Corridor, 1995, first conceived for the Venice Biennale in 1993, where Balka was invited to represent Poland and sprinkled the entrance walls of the Polish Pavilion with a light layer of soap, and here proposed in a more intimate corridor version, the size of which is give by the body measurements of the artist. Hear-ing is involved, or rather dominated by Wege zur Behandlung von Schmerzen, 2011, where a stream of black water is poured into a huge metal tub. The title is German for “ways of treating pain”, reflecting on the collective memory of past pain, which may only be overcome if expressed, like in the case of this “anti-fountain”, whose obscurity, more than serving as a memorial, refers to the dark depths of oblivion.

The difference in the scale of the works invites viewers to interact with the show through their bodies, consciously perceiv-ing its presence. While the tall and imposing fountain requires visitors to look upwards, Common Ground, 2013/2016, an expanse of 178 doormats, covers the floor below their feet. Balka gathered the mats from a poor neighbourhood in Krakow, exchanging them with new ones. A reflection on the idea of threshold, the possibility to intrude into private family life and, again on individuality and collectivity. Cruzamento, 2007, is another example of direct interaction with the body of the viewer, which is hit by a strong jet of air upon entering a cross-like structure, defined by the artist as “a kind of moment of purification and bodily cleansing”.

“There are 18 works on show, which is a perfect number in this case, because it contains a 1, which is the single, the au-thor, the individual, and 8, which refers to infinity, and in fact to all the people who have contributed and continue to do so in order for these works to exist.” The people who gave their belongings, the victims of the dramatic events that shook the last century, the people who worked on this exhibition, down to every last visitor: Balka is keen to emphasize how they are all an integral part of the exhibition and its works, “which are like stations: without travellers, they make no sense”.