In 2018 Pirelli HangarBicocca presented “The Feeling of Things”, the most extensive retrospective ever staged of the work of Matt Mullican (Santa Monica, California, 1951), a renowned American artist, active since the start of the 1970s and a pioneer in the use of hypnosis as a performance practice in art. The exhibition, which presents thousands of works, immerses the visitor in the articulate cosmology of the “five worlds” conceived by the artist: a particular system of representation of reality made up of images, pictograms, icons, codes, signs, symbols and colors. A visual vocabulary capable of interpolating traditions, scientific studies, beliefs and cultures of different times and places in order to ponder the age-old existential questions and the most profound and hermetic aspects of life

Pirelli HangarBicocca (for more infohttps://pirellihangarbicocca.org/en/exhibition/matt-mullican/)  hosts more than forty years of work by Matt Mullican, starting from the 1970s when, as a pupil of John Baldessari, he attended the California Institute of the Arts in Valencia (USA), the school supported by—among others—Walt Disney, right up to recent works (dated 2018), produced especially for the Milan exhibition.

The exhibition itinerary as a whole presents us with the artist’s prolific production and the extraordinary variety of media used: sculpture, large-scale installations, paper-based works, as well as ones in glass, stone, metal, posters, multiples and editions, neon lights, photographs, paintings carried out using the frottage technique, videos, performances, lightboxes and computer-based projects as well as virtual reality. There is also a vast selection of his iconography: Mullican draws on elements taken from the world of film and comics, from contemporary communication icons, from the signposting in airports and images derived from various traditions—such as Hindu mandalas, tantric imagery and Hopi Indian symbols—not to mention sources of a primordial nature (also relative to the idea of birth and death, of fate and destiny), as well as from scientific illustrations, giving rise to his personal pictograms (“Signs”).

The exhibition, curated by Roberta Tenconi, occupies the 5,500 square meters of the Navate and Cubo of Pirelli HangarBicocca. Visitors are invited to explore this space, moving through a major rectangular architectural structure, split into five areas of different colors, the connotations of which hark back to the iconic cosmologies of the artist. 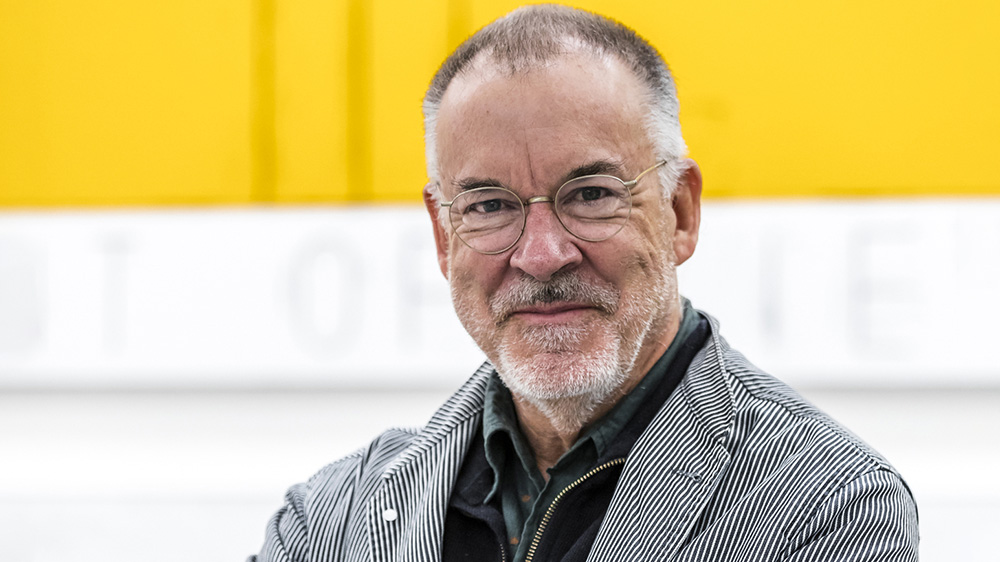 Mullican’s artistic practice is in fact accompanied by two main ways of working, with the constant aim of investigating and examining the relation between reality and perception, and providing structure for every aspect of the human condition. On one hand, the definition of a genuine cosmology which since the 1980s he has defined as the “five worlds” and with which he shows how the understanding of reality is an interior construction, forged entirely by the imagination: each world corresponds to a different level of perception and is represented by just as many colors. Green for the physical and material elements; blue for everyday life; yellow for the arts; black for language and signs, and red for subjective understanding. On the other hand, there is his exploration of the subconscious mind through the practice of hypnosis and of states of profound concentration and trances. In the state of the induced trance, Mullican claims that he becomes another person, quite unlike himself, known as That Person: an ageless and sexless entity yet with its own personality, and one capable of producing works of art.

The exhibition starts with four hanging banners, among the largest ever produced by the artist and originally commissioned for the spaces of Le Magasin in Grenoble in 1990. It continues along the nave with eight red banners (Untitled, 1986)—originally featured on the façade of the Museum of Contemporary Art in Los Angeles—, and one yellow banner from the series of ten, designed for the large glass windows of the Neue National Galerie in Berlin (Untitled, 2006), that frame the space to reflect the colors and symbols of the cosmology of the “five worlds”.

The first area that we find is made up of a large red semicircle, in which a series of works are presented that sound out the most remote meanders of the artist’s psyche and subjectivity, introducing the figure of That Person, such as Untitled (Learning from That Person’s Work) (2005). The work, made up of a great labyrinth of sheets bearing a series of drawings produced by That Person, displays an interweaving of texts, numbers, images and diagrams, revealing various aspects of its personality.

The exhibition continues with the area inherent to the theme of communication and language, represented by the color black, in which—on tables and on more than 120 bulletin boards, the display system commonly used by the artist and consisting of simple wooden

surfaces—a vast collection is displayed of works on paper, including drawings, photographs, book projects, prints and pages from his notebooks, obsessively compiled by Mullican. From among these, the series of collages taken from comic strips stands out, like Details from a Fictional Reality (1973) and Details from an Imaginary Universe (1973): through his cutouts from cartoon strips, the artist imagines the existence of the characters outside, or before, the story itself. The idea of analyzing a fictitious life returns in Untitled (Birth to Death List) (1973), a poetic description of an anonymous female figure from her birth to her death in a long sequence of brief utterances. In this black-colored space, various books are also presented in which Mullican couples texts, notes and drawings with photographic images or ones taken from internet or famous publications. With each page stapled onto the bulletin boards, the selection includes: Notating the Cosmology (1973-2008); Untitled (Histoire Illustree de la Fonction Cerebrale) (2011); The Meaning of Things (2014); Illustrated Anthology of Sorcery. Magic and Alchemy (2016) and Man and his Symbols (2016). What’s more, for the occasion of the exhibition, the artist opens his own photographic archive, presenting a selection of more than 2,000 photos for the first time, from his analogical shots of the 1970s, ’80s and ’90s right up to his more recent digital images.

In the center of the exhibition itinerary, we come to the yellow area, which symbolizes the world of culture, science and art, in which a series of works is featured drawing on the order of the entire exhibition. The main, original matrix of the display is the M.I.T. Project (1990), a meta-architectural structure in which objects and materials of various kinds are organized according to a predetermined order. The installation was presented for the first time at the Massachusetts Institute of Technology in Cambridge in a solo show held by the artist—later shown in a number of variants, including one displayed at documenta IX in 1992 in Kassel—and now part of the MACBA collection in Barcelona. This project originated from the development of a previous work, Computer Project (1986-1989), in which—in a truly pioneering manner for that period—Mullican created a virtual map of an imaginary city.

“The Feeling of Things” continues with the blue section, dedicated to the world of everyday life, where the artist once more presents the theme of the ideal city, through paper-based works, ones using granite and glass as well as lightboxes. In Untitled (1989), a spinoff of his Computer Project, Mullican creates a series of lightboxes on which computer-generated images and views taken from this work are presented. What’s more, in this area, a series of films and videos are shown, ranging from early footage shot on Super 8 in the 1970s, with which Mullican described the world around him, to his famous Elevated (2005): a poetic portrait of the city of New York based on found footage dating back to 1934 and with a soundtrack by David Lang.

Lastly, a separate yellow area, not accessible to the public and only visible from the outside, is set aside as an ideal studio for That Person, with everyday objects and furnishings that characterize its life, as well as two major sculptures from the 1970s which represent the stylization of a person: Head and Body (1973) and Sleeping Child (1973).

The overall structure is completed with the green area, which in Matt Mullican’s cosmology represents the natural world, that of material and elements. Here the artist shows a selection of readymade objects, several coming from the collections of city civic museum, such as bones, stuffed animals, stones, bugs, seeds and minerals, lent by the Museo Civico di Storia Naturale in Milan, but also exemplars of generators and machines for the production of steam, which belong to the Museo Nazionale della Scienza e della Tecnologia Leonardo da Vinci. The section also features two of Mullican’s earliest works, Light Patterns (1972) and Color Light Patterns Under Green Light (1972): pieces of colored card exposed to various sources of light, with which the nature of human perception and its relativity is investigated.

The exhibition itinerary comes to a close in the separate space of the Cube with the presentation of more than 70 Rubbings: paintings carried out using the frottage technique, produced from 1984 onwards, which entirely cover the four large walls of the Cube. Particularly evocative is the Dallas Project (1987), originally conceived for the Dallas Museum of Art and presented here in its third version (Dallas Project (Third Version), 1987), made up of around 400 black-and-white sheets, bringing together Mullican’s entire cosmology. Among the other major cycles there is also Untitled (Two into One becomes Three) (2011), a large-scale work in yellow and black, as well as 449 carved magnesium boards which make up Untitled (New Edinburgh Encyclopedia Project) (1991): reliefs of the pages of an encyclopedia owned by Mullican and copied out here in great detail, on 49 boards placed in the center of the room.