Maria Esther Bueno is the woman of all times

The first woman to carry the Brazilian flag to the tennis world elite, the sportswoman is the Pirelli brand ambassador. “I would like to have my parents and my brother alive to see me carrying the Olympic torch,” the tennis player dreams

Home life Maria Esther Bueno is the woman of all times

Maria Esther Bueno is the woman of all times

Class. Daring. Humor. Intelligence. These adjectives, and many more, come to mind to whoever talks to this great woman and sports icon. Throughout her 20 years of career, Maria Esther Bueno won 19 Grand Slam tournaments, gathered 589 titles and participated in 21 matches per week. She also underwent 20 surgeries and, after one of them, after playing three tournaments in a row in only one day, the doctors sentenced: she would never again move her arm. That was in 1969. Despite that, the tennis player proved otherwise and gloriously returned in the mid-70s, winning the Japan tournament in 1974. “It was my overcoming,” she says. Since then, she has never dropped the sport again. She acts in the tennis sport in many ways, from clinics to comments about the matches. Back to 2016: Maria Esther is Pirelli’s ambassador, TV commentator and she will be one of the persons in charge for conducting the Olympic fire to the opening of the Games.

In 1979, the sportswoman entered the Tennis Hall of Fame and she was elected by the United Press the best athlete of the year, among all sports, in 1959 and 60. She goes on more active than ever. She travels a lot, both to work and to participate in noteworthy events, such as the Wimbledon games and the 90th birthday party of the Queen of England. 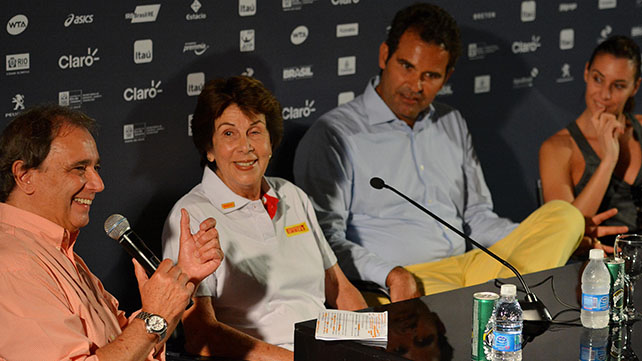 “It is very interesting to know that, never again, no one will win three tournaments in a row. This is one of the things that my career has given me, and that there is no way to have it. Another point is the family: I owe everything to my parents and to my brother. I would love to have them alive to see me carrying the Olympic torch,” Maria Esther says with sentiment. Proudly, she tells that her family supported her and gave her good education so she could travel alone. “I left Brazil when I was 15 years old, with a one-way ticket, moneyless, and I couldn’t speak other languages. However, none of it was a problem. It was my routine,” she complements. At that time, a woman could only go out accompanied by family members and she traveled the world alone when she was 15 years old, and working.

Anyway, the tennis player considers her biggest overcoming to live seven years without moving her right arm, everything she caught fell on the floor. After that, to play again and win were, indeed, her biggest overcoming.  Maybe, Maria Esther’s secret is the way she faces life. For her, the plan for the future is simple, direct and deep: “Always learn. I try to learn new things every day. I try to enjoy all opportunities I have,” she says.

Humbly, she states that the experience brought her consciousness that we know nothing. “Of course that everything I live today, both with the companies and with my job as commentator of TV programs, came through the tennis, but in a different manner,” she points out. Yet, now in 2016, a new world in rising and the sportswoman confess that she is learning about business and the modus operandi of a company.

And as regards being Pirelli’s ambassador? “Imagine you’re 76 years-old and receives the proposal of company such as Pirelli, believing that you can represent it well,” she rejoices. Another positive point in this new partnership is that, in this year of Olympic Games in Rio de Janeiro, it is unutterable to have the opportunity of also representing the Christ the Redeemer’s Monument, sponsored by Pirelli since 2014, and that is, in Maria Esther Bueno’s words, the maximum postcard of Brazil.

The open arms
of the Brazilians

Much more than
just making tyres