The personal exhibition of Laure Prouvost GDM – Grand Dad’s Visitor Center, curated by Roberta Tenconi, will be on show at Pirelli Hangar Bicocca from 19 October to 9 April 2017: the total work of art comprising over fifteen installations gives life to a layered space where architecture, art and symbolism coexist and interact, creating a cognitive and perceptual multiverse

Laure Prouvost, winner of the Turner Prize and Max Mara Art Prize for Women in 2013, pursues contemporary hypertrophic communication, the frenetic consumption of images and non-sense given by hyper-sense, the hype. Her works speak all possible languages and offer countless responses, like a broken mirror, or infinite scroll, the new magic 8 ball; fiction, imagination and dada are combined in the daily reality of naïf objects and prosaic emotions, brushes shatter into a thousand visual particles, flower petals speak to us as they kiss: “We are so happy you made it… We love you… We have been waiting so long for you to arrive”. The sounds are soothing while the space is unstable and labyrinthine, in continuous evolution, constantly mediated by technology. The exhibition passes through alienating environments and paradoxical atmospheres, halfway between pop and virtual reality: a beauty salon, reflective surfaces, angular, inclined rooms, dark corridors, a tearoom (for Grandma: In Grandma’s dream there would be planes which are half teapot half planes and which serve tea to everyone in the world) and karaoke (for who know who – her, us, the flowers). These are all linked by lights, flowers and written words, juxtaposed, whispered and submerged by visions. For once contemplation is accelerated in real euphoria, a push to go faster, a kind of Apocalypsis cum figuris. 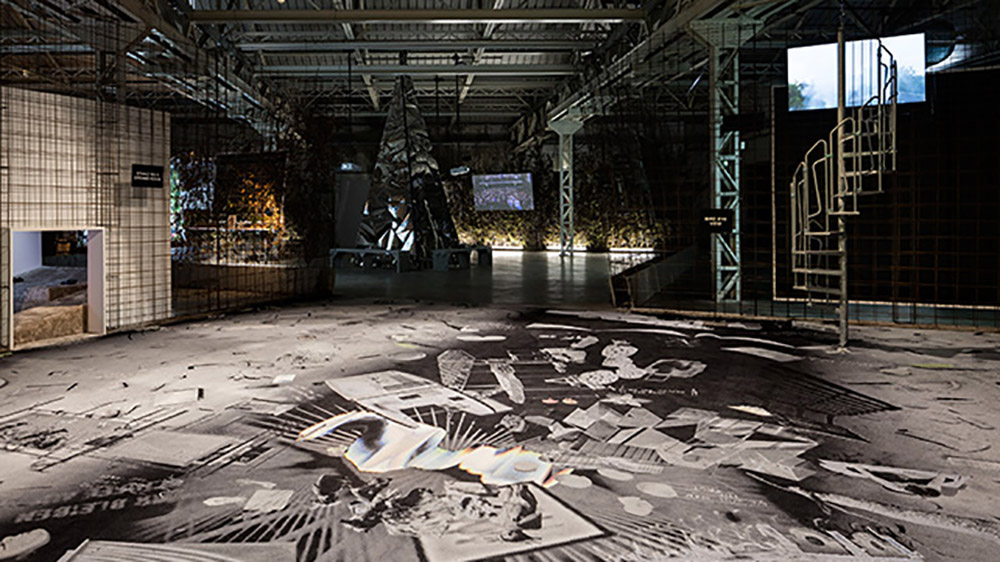 The works on show include: If It Was (2015), Into All That Is Here (2015), We Know We Are Just Pixels (2014), Grandma’s Dream (2013), Before, Before (2011), The Wanderer (God First Hairdresser/Gossip Sequence) (2013) and I Need to Take Care of My Conceptual Granddad (2010). Grand Dad’s Visitor Center is in fact inspired, as the title would suggest, by the alleged story of Laure Prouvost’s grandfather, a prolific conceptual artist who, digging a tunnel from his studio to Africa, one day disappeared leaving his wife not only alone, but as sole custodian of his works. The idea behind Prouvosts’s project was conceived back in 2013, with video installation Wantee, featuring sculptures by her grandfather now transformed into household objects. Visitor Center is a broader reflection on the very meaning of the museum as a place dedicated to the conservation of artworks while being necessary for their future transmission, inverting its role. And if museums were no longer places where you feel compelled to whisper? If they were spaces for dancing and singing, where you can come closer to the work of art and the emotions it arouses? If visitors were greeted with a kiss? If instead of feeling watched by the guards, you could not only touch the statues but caress them, like in the video If It Was (2015)? Yet the museum remains a place where the past, with its moulds and mists, becomes meaningful in the present but also in the future, and its conventions are a part of the ritual that enables us to be transported “through the tunnel of history” to “other places”. Perhaps this is the reason why the spectator is constantly called by the artist’s voice and invited to experience the space, breaking the conventional, reassuring distance between spectator and narrative fiction. It makes you move, dance, touch and try: as if it were necessary to cross sensory borders to expand those of the imagination.

It goes without saying that the central theme of the exhibition, together with identity, is language. As with all other types of conventions, the artist also – and especially – questions the meaning of words. In other terms: she translates. Prouvost does so in order to confound form born from habit and reveal its virgin aspects, in a constant synesthetic mechanism: transforming text in to images, transposing film into sculpture, and so forth, until generating total interpretative chaos – also literally, through the staggered translation from French (her native language) to English (assimilated over nearly twenty years in London). And here is where the two major paths meet: who am I if I no longer understand, if I no longer perceive something equivocally, if I move too far from my cognitive coordinates? This seems to be the question the artist indirectly asks us, while reassuring us with a complicit smile: we still exist, even when we are confused, even when we are dreaming, even when for a moment we no longer know exactly who we are, even when we are lost in a tunnel, like her grandfather supposedly was. So go get lost, all of you: “You are off to better places, trust us”.