From the 30th of September 2016 to the 29th of January 2017, the Pirelli Hangar Bicocca will host Situations, the first European retrospective of Kishio Suga (Morioka, 1944), a formative figure of Japanese contemporary art. The twenty-three works that make up the exhibition, curated by Yuko Hasegawa and Vicente Todolí, date back to a period that stretches from 1969 to the mid-90s, and have been adapted to interact with the large, open space of the Pirelli HangarBicocca, which is the largest exhibition space that the artist has ever had to work in. In fact, this ability to adapt to the specificities of different spaces and situations, or shape-shift – as fluids do –, is one of the artist’s fundamental characteristics. As a leading figure of the Mono-ha movement (literally "the school of things", founded in Tokyo between 1969 and 1972) who was strongly influenced, or better encouraged by Arte Povera, Kishio Suga has defined an artistic language that unites the profound relationship between space, nature and the elements. 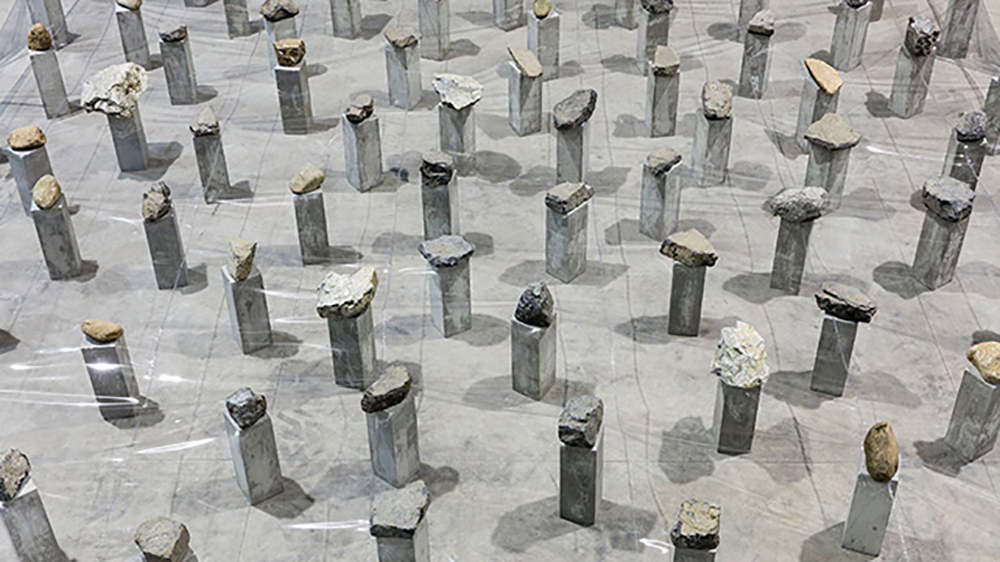 Kishio Suga explains that working on this exhibition was a major challenge, but did not deny his ability to adapt to any space. The question that he raises is more existential than artistic, as he asks: how do you feel my existence in this space? And then works accordingly.
More than the artist himself, who is cancelled out by his creative act, it is the names of his works that speak: Critical Sections, Fieldology, Continuous Existence-HB, Soft Concrete, Placement of Condition, Perimeter, Condition of Situated Units, Exposed Realm, Unfolding Field, Matter and Location, Situation Abandoned, Units of Dependency, Concealed and Enclosed Surroundings, Contorted Positioning, Infinite Situation III, the periphery of Space Law of Multitude, Gap of the Entrance to the Space, Separating Dependence, Left-Behind Situation.
Each of Kishio Suga’s actions is designed to make the existence of the materials visible, leaving them to tell their story by putting them in the best position to do so and then taking a step back in order not to disturb. Their presence is far from the artist's will, and distant from the symbols of art and society. Indeed, Suga’s creations have always been a form of resistance against consumerism and the spectacle of art. And in fact, the Mono-ha movement itself aims to reintroduce the lost element of the spiritual to art.
Kishio Suga invites you understand the substance of the material and feel it intuitively, without any overbearing superstructures. His show is a sort of zen garden composed of found objects: branches, twigs, trunks and string. It could almost be a bird's nest. All things – in the exhibition as in the cosmos, and in the exhibition as a metaphor of the cosmos and a translation of the sensitivity required to perceive it – are set in relation to one each other; all of these things have already existed and still exist. The artist’s intention and his non-intention, his expression and non-expression, form a highly critical boundary. The viewer is left to define this boundary. Things speak, the audience listens.
This approach to an exhibition is reminiscent of Carlo Scarpa – not surprisingly a great lover of Japanese culture – who created his installations in such a way as to allow the works to be "heard", like a stethoscope on the heart. Thus one creates an intimate relationship between space, materials, objects and visitors; a space within a space, another existential dimension that includes everything and everyone, combining the perceptual differences and subjectivity of all elements through a sense of union. Cement supports wood, fabrics are woven around tightening twigs, grass grows between bricks, and steel creates perfect, yet unstable equilibriums ten meters of height. The Western world – or rather the globalized world – as suggested by the last work of the exhibition, Left-Behind Situation (Shachi Jōkyō), has lost its centrality, breaking up into many unique and precarious realities. Time passes and all things shift in a constant flux of movement and resettlement. Kishio Suga dissects this movement to show a moment, as a presence and its essence, an epiphany. In every human life, in any situation, it is important to be able to see the substance of things: this is the message that the artist wishes to convey. This exhibition will do much more than ask you to activate your five senses; you will have to put your heart into the game.