A collaboration between the iconic Japanese designer and Pirelli traces the profile of the contemporary Italian man, sporty but with an inborn elegance

If there is one designer who can truly be regarded as a cult it is Junya Watanabe. Reserved (he gives out very few interviews), allergic to the rituals and indulgences that typify the world of fashion (like coming out to take applause at the end of a show, which he hardly ever does), intellectual, as he is often defined: Watanabe is a designer who speaks only through his work, and for this reason eludes the categorisation that entraps many of his colleagues. Away from the catwalk, for example, he is something of an enigma.

Born in 1961, he was a student at the Bunka Fashion College in Tokyo – one of the world's best fashion schools – where he graduated in 1984. In the same year he gained a place in the Parisian court of Rei Kawakubo, the first of the great Japanese designers, who immediately noted his remarkable technical ability and the creative flair that set him apart. He joined Comme des Garçons as a pattern maker and had already risen to be head designer of the Tricot line by 1987. But in 1992, on the advice and with the financial backing of Kawakubo herself, he decided to go it alone. The label bearing his name thus came into being, and for a long time remained one of the best-kept “secrets” of the Parisian fashion scene. 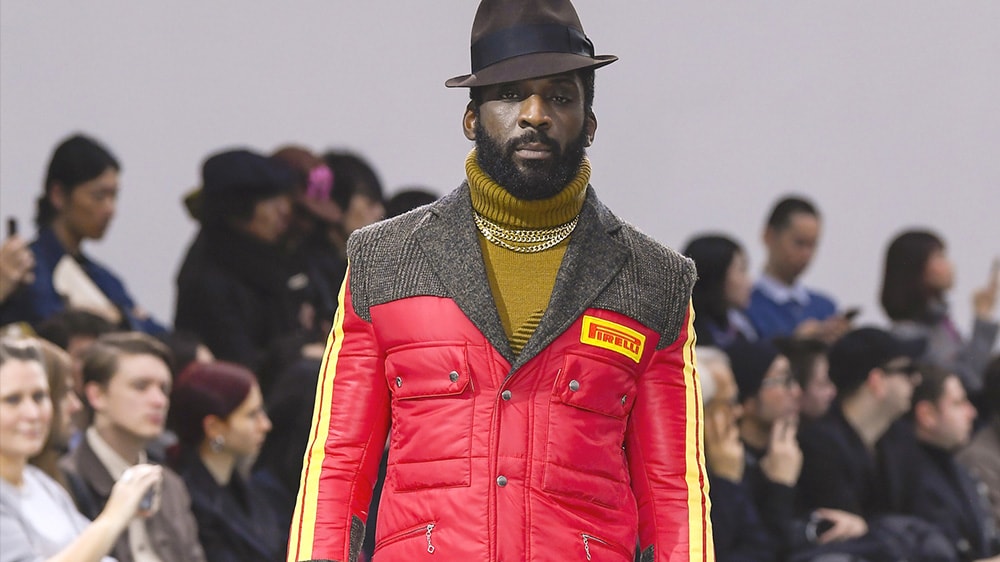 Watanabe is a designer for refined tastes, for a number of reasons. One is that his interest has never been in trends but in the more classic items in the wardrobe, from trench coats to jeans to leather jackets, around which he has created endless variations.  Watanabe’s great talent, his cultural relevance in a fashion world that has increasingly moved away from the designer’s craft in the narrow sense, lies precisely in his way of giving an unconventional twist and reinterpretation to everyday, almost banal garments, investing them with a touch of the extraordinary without ever forgetting their practical function. And it is precisely this functional perspective on fashion (and on beauty in general), this «pragmatic approach», as Alexander Fury described it in the New York Times, that distinguishes him from Kawakubo, who focuses instead on «pulling fashion apart» with creations that are more like site-specific installations than actual garments. It is no coincidence that one of the more apt definitions of his fashion is as “tecno-couture”, in which pure stylistic creation meets experimentation with shapes, fabrics and materials to give birth to garments that can be at home in an everyday wardrobe. Watanabe has also taken the lead in collaborations between designer brands, a business model now regarded as one of the most profitable approaches and in-line with the contemporary spirit. He was one of the first designers to seek out and include in his collections brands that represent the best of a given sector – such as North Face, Converse, Levi’s – rather than creating a sweetened version, working with them to create new models, meanings, interpretations.

He took this approach also with his most recent Autumn-Winter 2020 collection, presented in Paris on 17 January during men’s fashion week.  The show was conceived as a celebration of formal but relaxed elegance, which has always been synonymous with Italian style. Watanabe took inspiration in his show from “real” men in flesh and blood, in other words those at the textile company he works with to produce his clothes. As he told American Vogue, he wanted to highlight the affinity between the wardrobe of this ideal Italian man and his passion for cars, the ultimate expression in many areas of northern Italy where some of the world's most refined and technologically advanced cars are made. This is why the Japanese designer decided to revisit the key items of a man’s wardrobe, like overcoats and jackets, blending them with elements of iconic brands that represent the same spirit.

And it is also how he came to begin his collaboration with Pirelli - along with Brembo, Abarth, Moto Guzzi and others - with the presentation of a special capsule collection inspired by the Pirelli padded jacket with the iconic red and yellow logo worn by motor sport race technicians in the ‘70s. The capsule collection comprises 4 items – 2 overcoats, 1 jacket and 1 T-shirt – revisiting and updating the silhouette of these garments with the use of new materials, one of the distinctive traits of Watanabe’s work. The double-breasted jacket, the classic overcoat and the raincoat update but also retain the colours and details that still link the Pirelli jacket to an unforgettable era of sport, performance and style. A carefree and fun collection in a play on the stereotypical Italian man, an idealised and romantic interpretation that simultaneously works at the meeting point between sportswear and tailored clothing.

Puma, the sneaker
with the Pirelli footprint

Pirelli and Montblanc, a trolley case collection that teams design with travelling