Star Trek, Lost, Alias. J.J. Abrams is the director of these successes, and now of Star Wars Episode 7 too! Here is the interview 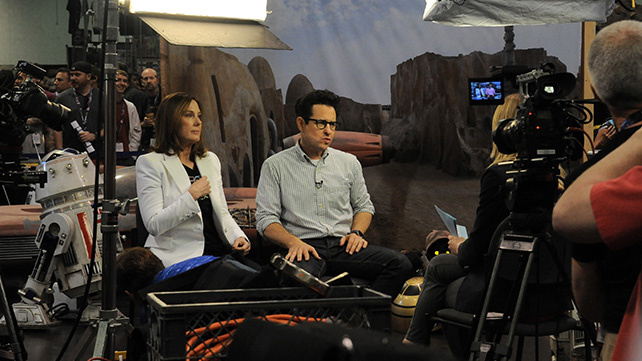 Los Angeles – As we watched director J.J. Abrams introducing the first images of his “Star Wars - The Force Awakens” a few months ago in front of a hysteric crowd of geeks and ultra-fans, we couldn’t help but think: he’s the first guy to have directed both a “Star Trek” and a “Star Wars” movie. A master of storytelling mixed with pop entertainment and a heavy dose of special effects and digital enhancements: who better than Abrams can guide us through the complex and exciting maze of the new technologies applied to film?

After all he’s the creator of successful, suspenseful TV series as “Alias” and “Lost,” and has helmed big budget movies such as “Mission: Impossible III” (2006), the reboot of “Star Trek” (2009) and its sequel “Into Darkness” (2013), and he’s now done with the new “Star Wars” (Episode VII) with Harrison Ford, which he also wrote, with Lawrence Kasdan, and produced alongside the saga’s godfather George Lucas with his Lucasfilm and Disney Pictures (December 2015).

Episode VII will kick off a new trilogy: Disney’s president Alan Horn – sitting next to Abrams – announced that the next two instalments of the saga will be released in 2017 and 2019: Episode VIII will be directed by Rian Johnson, while N. IX will be passed to Colin Trevorrow (“Jurassic World”), under the supervision of the same Abrams. Horn has also announced the project of a new “Star Wars” themed area to be built inside Disneyland.
“‘Star Wars: Episode IV - A New Hope’ (1977) is probably the most influential film of my generation,” Abrams says at the D23 event in a huge hall filled with “Wars-maniacs” in Luke Skywalker or Ian Solo drags with their own lightsaber, at the Anaheim’s Convention Center (soon thereafter, we met Abrams again at the Comic-Con convention in San Diego, another “geek stravaganza”). “That work was the personification of good and evil and the way it opened up the world to space adventure, the way westerns did to our parents’ generations, it left an indelible imprint. So, in a way, everything that any of us does is somehow directly or indirectly affected by the experience of seeing those first three films.”
“George Lucas was a genius at creating this amazing universe and filling it up with so much heart, soul and hope,” says Abrams. “As Lucas did, I also insisted on real, palpable sets for Episode VII, and practical on-camera effects, with robotics and animatronics to give the audience the feel of a world they’ve already explored and seen, though they still don’t know the new stories we’re about to tell. I wanted to provide continuity to the things Lucas has started, and Steven Spielberg has continued and developed. “Jurassic Park” and its mix of animatronics and digital animation, or CGI [computer graphic imagery], for example, sprang open new horizons: from that moment on, it was open season!”

Everything was state of the art technology, unthinkable in 1977, and yet I think we guaranteed a sense of loyalty and respect towards the beginning of the FX and the digital era.

“I’m not denying the use of hundreds of CGI shots for Episode VII,” continues Abrams, 50, native of New York (he lives in Los Angeles with his wife and their three kids). “But we aimed at authenticity and photo-realism, therefore we shot all the exteriors in the real deserts and dunes of Abu Dhabi, to then move the interiors at Pinewood Studios in London. We built hundreds of robotic creatures that interact magnificently with the actors, and we did some motion-capture with the help of specialist in mimics Andy Serkis. Everything was state of the art technology, unthinkable in 1977, at the time of the first ‘Star Wars’, or in 1994 and ‘Jurassic Park’. And yet I think we guaranteed a sense of loyalty and respect towards the beginning of the FX and the digital era.”
Abrams insists that the FX side of filming must never be gratuitous, and always in service of the story. “I’ve always liked working on stories that combine people who relate to something insane,” he says. “The most exciting thing for me is crossing that bridge between something we know is real and something that is extraordinary. The thing for me has always been how you cross that bridge.”

“When I was a kid and saw ‘Star Wars: Episode IV - A New Hope’ for the first time, it blew my mind and around the same time, I had friends who were great fans of Star Trek and I don’t know if I was smart enough to get it, or patient enough. What I loved about Star Wars was the visceral energy of it, the clarity of it, the kind of innocence and big heart of it. Star Trek always felt a little bit more sophisticated and philosophical, debating moral dilemmas and things that were theoretically interesting, but for some reason I couldn’t get on board. It really took working with all these guys and actually working on Star Trek for me to fall in love with that.”
“But I don’t feel any kind of Coke vs. Pepsi thing about it. It seems there is enough bandwidth for both of these very different stories to coexist. I feel incredibly lucky to be involved in either of them. Looking back on my childhood, I have a list of things that are massively important to me. Without question, Star Wars was on the list, and Star Trek was not.”
We asked Abrams about the original developments in the field of CGI, motion-capture, animatronic and virtual reality in film, the way they will be implemented, and about the convergence between Hollywood, Silicon Valley and specialty studios like Lucas’ ILM.

“Technology, as I was saying, can and must help storytelling. I’m most impressed with motion-capture performance technology, the one with the man in lycra, the most sophisticated interface between man/actor and computer animation. It’s a very pure form of acting, as Serkis would tell you. You’re not helped by any sort of artifice or aided by any costume or prosthetic makeup. Instead, performance capture relies on a complex system of movement-mapping registered by multiple cameras, rendered digitally, and completed by a team of animators. It’s an impressive feat of cinematic magic that has seduced filmmakers and moviegoers alike but has failed to change attitudes pertaining to authorship of the role, the blurring lines of performance and special effects, and, ultimately, the lack of a warm body on-screen. It’s not CGI cheating!” he says laughing.
The technological doorway to the future has been crossed, all agree on that. Says the bespectacled, vivacious Abrams: “We went from the silent era to the sound era, and now we’ve done it again. Now that we’re digital, I assume we will stay digital for at least 50 years. Everybody says, ‘Oh, you’re going to replace actors.’ You can’t replace actors. We’ve created duplicates, clones, but they can’t act. They’re a computer, for God’s sake. If you think back to what was done in the Star Wars films, it unbridled people’s imaginations. That of course fueled the business at ILM because they were being approached more and more to keep raising the bar. Actors will not be replaced: worst case scenario, they’ll have to wear a lycra leotard!”

What about his assessment of the much heralded and sought-after virtual reality technology: another inevitable development in the future of entertainment? “Too much hyperventilating about it, if you ask me,” he says. “To me virtual reality is another bubble. Perhaps not a bubble as it had been in the early ‘90s, but it seems to me destined to small niches and arenas, video-games maybe, small piece of film making and documentaries. There’re people who occupy the intersection of Hollywood and virtual reality who are still grappling with the notion of a headsetted full immersive future in entertainment. Part of the issue is was kind of cinematic content will and might be available and thrive with VR? Everybody I know in the field agrees it will be short-form content, not features. I see film thriving on the big screen, Imax huge curve screens, for a long time. With CGI the sky’s the limit, but live-action or animated films, will be always plot-driven. And to me content will remain the most tricky and difficult special effect of all.”

Human Technology: can you build a tyre?

life
MOST READ
Getting the show
on the road