The nerazzurri’s history is unique and linked to the excellence of the Serie A and the dozens of trophies the club has won since 1908. To celebrate this history Inter’s Hall of Fame will be unveiled on 9 March

«It's beautiful to be an Inter fan: we’re not like anyone else ». Javier Zanetti has Inter’s colours engraved upon his heart and nobody more than the club’s former captain has a more valid claim of belonging to something as unique as Inter. Indeed his face might well adorn Inter’s Hall of Fame that will be unveiled on 9 March at Hangar Bicocca, during the celebrations for the club’s 110th anniversary. The first 4 inductees of the HoF will be named and a Special Hall of Fame award will be presented directly by Pirelli. This will be an opportunity to look back at Inter’s history, the victories and records that offer tangible proof of a team that has not just been successful, but rather unique in the truest sense of the word: Inter is the only Italian club never to have been relegated to the Serie B, as well as the only Italian club to have won the Triplete (Italian league, Italian Cup, Champions League); it is also the first Italian club to win the Intercontinental Cup, and then there’s the partnership that links it to Pirelli. This is the most durable such bond in Italian football and one of the most longstanding and successful partnerships in European football. Pirelli is proud to have played an integral role in Inter’s 110-year-history though its sponsorship, that now spans 23 trophy-filled and successful seasons. 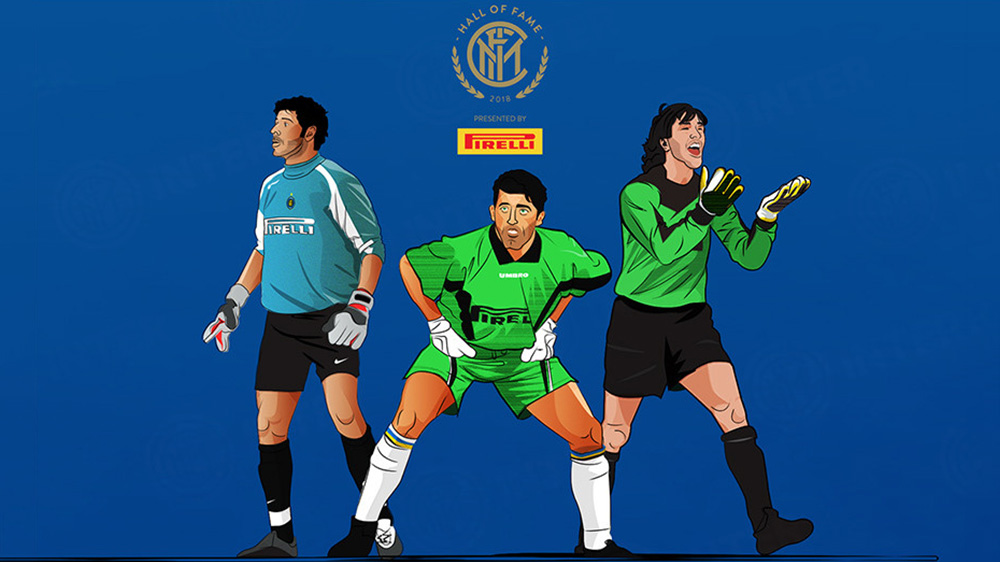 Inter’s history is also reflected by its impressive trophy cabinet, that includes eighteen league titles, three European Cups/ Champions Leagues and three Uefa Cups, as well as seven Italian Cups, five Italian Super Cups and two Intercontinental Cups. But even more important than the trophies is the lasting mark that has been left on football’s history by Italy’s only truly international club. This is certainly something we associate, for example, with the Inter side of Helenio Herrera, “Il Mago” (The Wizard) that dominated world football during the Sixties, as the nerazzurri became the first team to win the European Cup without suffering a single defeat (notching up seven wins and two draws along the way). That Inter side was not just an unstoppable powerhouse, it was also ahead of its times tactically, as the mercurial talent of Luisito Suárez and Sandro Mazzola combined with the first experiment for an attacking full-back, and Giacinto Facchetti’s marauding runs down the left flank.

Being unique means you can never escape your uniqueness, which is why Inter has always been a source of excitement  for all generations of its fans, and the list of names who deserve a special place in the club’s history are inevitably connected with the Inter colours: from Zenga to Toldo, Bergomi to Zanetti, Matthaus to Djorkaeff, Klinsmann to Vieri, Ronaldo through to Ibrahimovic and the stars that have been so victorious in the new millennium: every era and every position is associated with illustrious names.

In recent times Inter’s fans have been able to bask in the glory of more outstanding teams – under the stewardships of Mancini and Mourinho– that dominated the Italian league in the second half of the first decade of the new millennium. The names that brought the club back to the top of the Serie A – Samuel, Cambiasso, Milito, Stankovic, Sneijder, as well as all the others– are etched in the fans’ memories along with the great names from the past. They are also the heroes who set a special date in history for all Inter fans: 22 May 2010, Madrid, Santiago Bernabéu stadium, Champions League final, when Milito’s brace gave the nerazzurri’s their third success in Europe’s most important club competition. This was also the most recent victory by an Italian team on the international stage and the triumphant highlight that capped one of the most successful terms in footballing history.