Here's how music conveys hi tech industry, its rhythm and its sounds

Home life The beautiful factory and its music

"Man (here in the factory) does not lose his aptitudes, he does not relinquish his genius. A measure of his abilities can be recognised in the object, in the product, in the goods. A docile machine helps him". These are the words of Leonardo Sinisgalli, an engineer and a poet, originally from Basilicata yet Milanese due to his choice of career and life, the "signature" of the Pirelli Magazine and then "Civiltà delle macchine" (Car civilization). They were written in 1949. And now they are the caption beneath a "calandretta" (small calender), a device for tyres dating back to the early 20th Century, installed in the entrance hall of Pirelli headquarters here in Milan, to remind everyone, every day, of the importance of the factory: a testimony to hard work and technique, which marks the time and becomes a metaphor of the best industrial condition. People. And their "doing, and doing well". Indeed, “the machine, when docile, helps”.

Factories are changing. And so are machines. They are becoming digital. Computers. Robots.  Web relations. Big data. Quality manufacturing remains. But with a hi tech soul. Obviously, people's jobs and skills are changing too.
“The beautiful factory”, one that is safe, bright, environmentally and socially sustainable, has a new face and a new culture. It also needs a new tale.
Taking its cue from Settimo Torinese, the Pirelli plant that is "wired", designed by Renzo Piano (the central structure between the two production facilities, which hosts the offices, amenities and research and development laboratories) in recent years has built its story through images (photographs by Peter Lindberg and Carlo Furgieri Gilbert) and then a theatrical story ("Settimo - La fabbrica e il lavoro" (Settimo - Factory and work), for the Piccolo Teatro theatre in Milan, directed by Serena Sinigaglia).
Now the challenge is even more ambitious: can the "beautiful factory" and the "digital" factory have its own music?
In the heart of the 20th Century, the steel and assembly chain factory built a sound that interpreted its tough, tiring, screeching soul, with the "four sounds of the siren" of Shostakovich's Second Symphony, for example (performed ninety years ago in fact, in 1927, to celebrate the tenth anniversary of the October Revolution). Today, beyond any rhetoric, what does contemporary industry sound like?
This is how “Il canto della fabbrica” (The factory's song) came to be, after a meeting between a composer, Francesco Fiore, and a musical group par excellence, the Italian Chamber Orchestra, directed by Salvatore Accardo and the people and machines of the Pirelli industrial pole in Settimo Torinese. Observation, listening and discovery. And dialogue. Amid the machines (mixers, calenders, "Next Mirs" robots) and the violins, cellos and violas. Amid the technicians of industry. And the musicians. Rhythms from which to draw inspiration and to process differently. And silences, as breaks from production and "interior space for the resonance of music" (the innovative lesson by a great Italian musician, Salvatore Sciarrino). Production turns into sound. The music from the Orchestra is an original interpretation of this in the form of a musical tale. 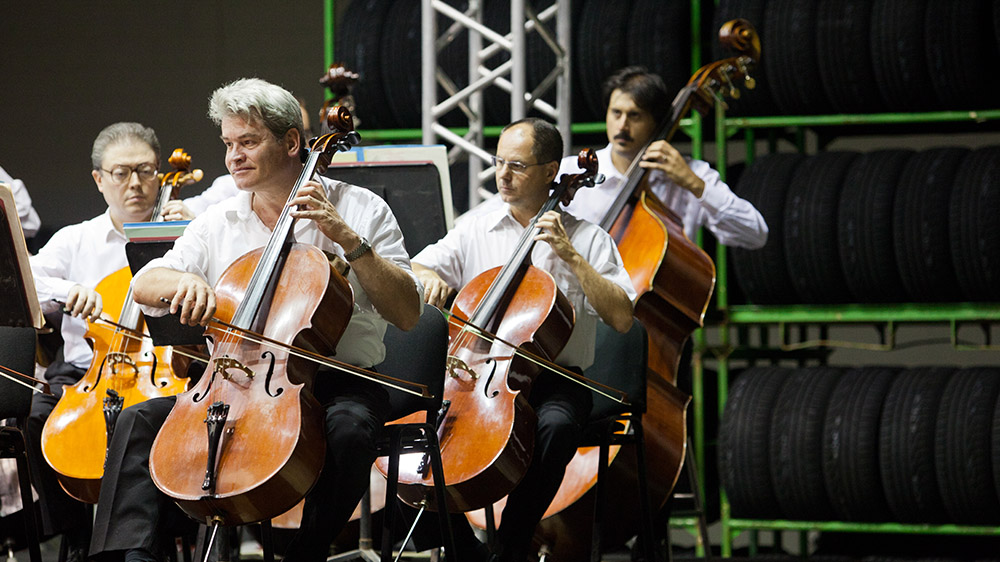 According to the maestro, Fiore: "During a factory visit to Settimo I got the idea that the piece should be inspired by contemporary industry and its rhythms of production, but it should also be designed specifically for the art of Salvatore Accardo and for the characteristics of his Orchestra.A factory intended as a place built by man intervening in the natural environment to create his workplace, and where knowledge and shared work must find a synthesis in an end product: specifically, music".
These are the inspiring themes: "The silent ballet of the enormous robots at work, with their movements marked by a mechanical grace so different from natural human movements; the depth from which the chemical compound is obtained, and then transformed into the finished product; the coexistence of old and new, human toil and apparently unperturbed and tireless robots, old machinery and latest-generation computers.I tried to pour all these ingredients into my piece: as if from an idea or an original cell (in this specific case the notes E - C - F - C sharp) one could, through processing and preparation, create something that does not lose touch with the generating element, but indeed follows the various ramifications, at times contradictory or conflicting as is the case in a developing process".
Fiore continues: "While I was working on my composition, one aspect became increasingly clear, namely that the solo violin assumed the role of human thought in the concept of my piece: something that has the task of summarising the impulses and the possibilities given by the raw material and of reprocessing everything in a synthesis of clarification".
The solo part "was therefore conceived not for the violin, but more specifically for the violin as it is understood by Salvatore Accardo: an instrument where reason and sentiment are balanced and mitigate each other, and where individual talent is enhanced by being placed at the service of the spiritual growth of society".
Music and community. Creativity. And rigour in interpretation and implementation. Dialectic. And dialogue. A "search". From these points of view too, the culture of the factory finds a musical representation. According to Salvatore Accardo: "With Francesco Fiore, a great connoisseur of the expressive potential and techniques of our Orchestra, we spent a year rehearsing, experimenting with sounds and harmonies.And we shared the importance of "doing things by hand", of touching the raw material, in this case musical, instrumental, plying it according to the characteristics of the performers, renewing an ancient skill.The close relationship between the composer and the performer is an essential side to creating music".
"Doing things by hand" is also used to refer to factory work: manufacturing. And it is fascinating - insists Accardo - "this creative convergence between musicians and technicians, men and women of musical culture and engineers and workers. Work and sound. Synthesis of extraordinary charm and profound emotion".
How does one translate all this into a composition? "It was immediately clear that the profound meaning of the piece lay in the dichotomy between the orchestra's part and that of the violin.While in some way the orchestral part could represent (through its severity and the rigidly structured counterpoint) the world of modern digital manufacturing machines, acting inexorably in the heart of the factory, the part entrusted to the violin instead used a language that was sometimes capricious, virtuosistic, meditative and unpredictable in order to guide - as if it were the human thought -  the entire path of the piece toward an ideal synthesis".
From this point of view, another aspect of the musical tale emerges: the ongoing relationship between tradition and innovation. A topic which also marks the entire history of the Pirelli Foundation.
There is indeed a habit that continues to grow. Testified, for example, by a concert by John Cage, in 1954, among the musician's most innovative and creative seasons. Where? At the Pirelli Cultural Centre in Milan. Work. Factory. Music. Signs of time.
Once again, as in the best Italian tradition, the scientific knowledge and the "téchne" (the ability to produce good factories) meet with the humanities. They express polytechnical culture. Which, over time, here at Pirelli plants too, takes the form of literature, drama, film, photography, visual art. And music. Creativity draws on mechanical rigour. Mathematics, expressed in digital form, guide production. But maths can also give rise to notes, chords, harmonies. Bach was a master of this art. His metamorphosis, in the encounter with the changing of time, also resonates in this "Song".Indeed a "search", as in the lesson by Bach.
Relations therefore intensify between Pirelli, Accardo and the Italian Chamber Orchestra (a dialogue and collaboration that have been going strong for years, also with the concert rehearsal seasons open to Pirelli employees, to see how a concert "comes to life"). And the relationship between Pirelli and MiTo Settembre Musica is strengthened. Concerts in the workplace, in the factory, in the Settimo Torinese industrial pole in 2010, 2011 and 2014 (with an extraordinary performance of Beethoven's Seventh Symphony before an audience of more than a thousand people) and then in 2016 in the Pirelli Auditorium in Bicocca, in Milan, have underlined the commitment to give back to music its leading role as the protagonist of great popular culture, with the awareness that people have never stopped loving classical music and, if anything ask, especially among the new generations, for more profound, original relations, packed with intelligence and emotions, open to the idea of a modernity that knows how to live among tradition and innovation.
The "Canto della fabbrica" takes this one step further. Work and industry make music. And its representation chooses the workplace in particular better to express it. Unprecedented harmonies.