HRH The Prince of Wales celebrates 50 years of Pirelli Carlisle

This year Pirelli celebrates the 50th anniversary of production at its plant in Carlisle, United Kingdom. The occasion was marked with an extraordinary visitor, who is celebrating his own 50th anniversary: His Royal Highness The Prince of Wales

HRH The Prince of Wales celebrates 50 years of Pirelli Carlisle

Arriving at the plant punctually at 10:15 am, His Royal Highness was welcomed by HM Trade Commissioner for Europe, Andrew Mitchell, the Ambassador of Italy in the United Kingdom, Raffaele Trombetta, the Executive Vice-Chairman and Chief Executive Officer of Pirelli, Marco Tronchetti Provera, together with a number of senior managers and the factory’s employees. 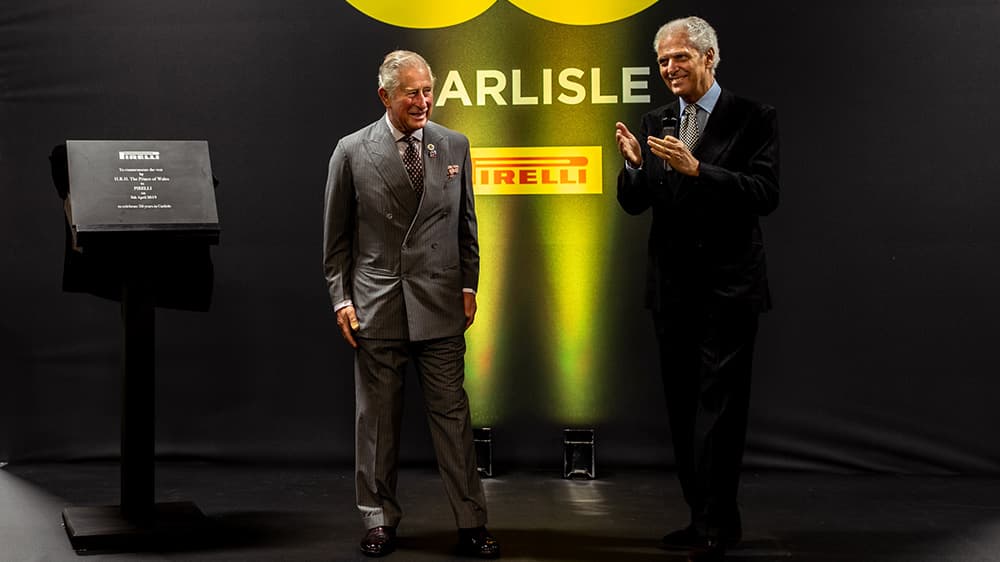 His Royal Highness then toured the factory where he was shown some of the key phases in the production of the tyres, stopping many times to shake hands and chat with the many delighted employees there to welcome him. Concluding the tour, the Prince of Wales revealed a plaque commemorating his presence and the 50th anniversary.

“It was a great honour to welcome His Royal Highness to our factory in Carlisle during this important anniversary year, and so celebrate the enduring and fruitful relationship between Pirelli and the United Kingdom. It will be a day that we will all long remember,” Mr. Tronchetti Provera said.

Of particular interest to the Prince of Wales was the company’s commitment to sustainability. Pirelli Carlisle has played a key role in working towards the group’s global goals, including reducing water consumption by 65% since 2010 and a 100% recycling rate of waste from manufacturing. These efforts have helped establish Pirelli as a recognized leader on the Dow Jones Sustainability Index and inclusion in the Climate A list of the CDP (formerly the Carbon Disclosure Project).

Another area of particular interest to His Royal Highness was Pirelli’s apprentice scheme, which has been running for more than 40 years. This interest is mirrored by the Prince’s Trust ‘Get into’ courses and the Team programme, which help young people who are looking for apprenticeships improve their chances of employment.

Sharing a milestone
In 1969, the same year as the Carlisle plant was launched, The Prince of Wales was invested with his title at Caernarfon Castle by his mother, Her Majesty The Queen Elizabeth II. For over 40 years His Royal Highness The Prince of Wales has been a leader in identifying worthy causes, playing a central role in establishing and driving forward a number of organisations to meet charitable needs. From the early days of The Prince's Trust in the mid-1970s, his charities have grown to represent a broad range of areas including, the Built Environment, the Arts, Responsible Business and Enterprise, Young People, Global Sustainability and Rural Affairs.

Pirelli’s operational presence in the United Kingdom first began in 1929 in Burton-on-Trent, a site which remains the headquarters of British Pirelli operations and is a key part of logistics and distribution networks.

Our Carlisle plant opened 40 years later and now supplies both domestic and foreign markets alongside acting as the centre of excellence for our growing range of SUV tyres.

2019 represents a landmark year not only the Carlisle plant, but for Pirelli in Great Britain as a whole as the Burton-on-Trent headquarters celebrates its 90th year.

Design week signed off
by Cycl-e Around