Home life A record pit stop with coffee and Wi-Fi

With its sharp yellow and grey decor, shiny steel fittings and pit stop-like workspaces, it is not for nothing that Pneumobil’s Frankfurt Driver Center evokes Formula 1. Committed to continuous improvement, the Center’s latest achievement in terms of premium service is a significant reduction in the time it takes to change a set of tyres to just 30 minutes, 14 per cent faster than in 2014.

Customers might not be allowed to sit in their car while it’s done, like a real F1 driver, but they can watch through floor-to-ceiling windows from a comfortable lounge while enjoying free Wi-Fi and a cup of coffee. “The one thing we don’t want is for customers to have an extended wait,” says Christian Mühlhäuser, chief executive of Pneumobil, Pirelli’s retail arm in the important German market.

Frankfurt flagship
Opened in 2013, the Frankfurt Driver Center is the chain’s flagship store. Such has been its success that the Driver Center concept is now being rolled out nationally. As of Autumn 2015, there were 11 other Driver Centers, with Bonn, Aachen and Trier the latest additions, with further Pneumobil outlets set to convert to the new format by the end of 2016.

We want to offer a new experience in terms of style, quality and consultancy for customers.

The redesign comes on top of a rapid expansion of Pneumobil’s footprint. Part of the Pirelli Group since 1994, it has more than 80 outlets, up from fewer than 60 in 2010, while staff numbers have risen from about 360 to more than 500.

“Our main target is to have modern, quality stores, not simply an expansion of the network. We want to offer a new experience in terms of style, quality and consultancy for customers when they enter our Centers,” says Mühlhäuser. “We expect organic growth to come from expansion of the Driver Center brand.” 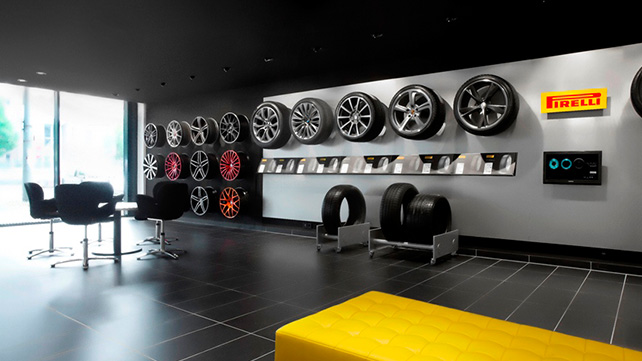 Hotels for hibernating tyres
It is not only customers that receive star hospitality: the Centers double up as hotels for their tyres. In Germany, more than 80 per cent of drivers change their tyres seasonally: local laws require winter tyres to be fitted when roads are snowy or icy. In their off-season hibernation period, tyres can be housed by Driver Center, which will clean and repair wheels, and rebalance them ready for the road. At the Frankfurt Center alone, some 5,000 sets of customer tyres are stored.

While the average replacement rate is 1.5 tyres a year, this regular, twice-yearly contact with customers has enabled the group to evolve from being a tyre business into a broader, one-stop shop service organisation: it offers service checks free of charge and undertakes repairs.

“Our focus is to keep our customers ‘safely mobile’”

“Our focus is to keep our customers ‘safely mobile’”, says Mühlhäuser. “The service checks are very much appreciated by our customers.”

Fairness Award
This is backed up by Pneumobil’s many awards. In 2014, it won a German Fairness Prize from the Bertelsmann Group while in 2015 it was named Best Tyre Dealer by German television channel NTV and the German Institute for Service Quality.

Just over a quarter of customers’ cars are found to need extra services. The Centers offer anything from replacing window screens and batteries to fixing brakes and tuning the suspension.

For those without the time to visit a Center, Pneumobil goes to them, a service growing in appeal. When servicing a company fleet, a visit from Pneumobil’s mobile unit is also more environmentally friendly than driving several vehicles to a Center. And, while the majority of the tyres Pneumobil sells are Pirelli, it also supplies other brands.

Formula 1 thinking
Achieving high standards is about “top of the class” teamwork, says Mühlhäuser. The Driver Centers may have the look of Formula 1 but he also hopes the sport infuses his team’s mentality.
“We want to be the team that makes the most difference to customers,” he says. “We don’t only want to reduce the time it takes. We also want to improve the quality of the service. If people enjoy going to have their tyres changed, then we’ve taken a big step.”