From Lastex to diving masks... on holiday with Pirelli

“I had bought a couple of bathing suits. One white and one pink. And then two umbrellas; those ones which protect you from the sun. One white, and one red with white polka dots. And a bunch of silk scarfs. My idea was that, at a certain point, the model would take off the costume and cover herself only in silk. And dance for me, in the wind...”

Home life From Lastex to diving masks... on holiday with Pirelli

From Lastex to diving masks... on holiday with Pirelli

It’s 1949, Tobay Beach, Long Island, New York. He’s the Californian photographer André De Dienes. The model is Norma Jean Monroe, stage name Marilyn. Neither one of them could have imagined that just three years later, in 1952, the now famous model would bring those shots to be used in an advert for the Italian company Pirelli. Because that pink swimming costume (we still don’t know if she then took it off) was made from a magic elastic material, Lastex, manufactured by threading rubber fibres together. It was produced by Pirelli-Revere, an “Italian-American elastic thread company”: in the fifties Lastex would conquer beach girls all over the world. 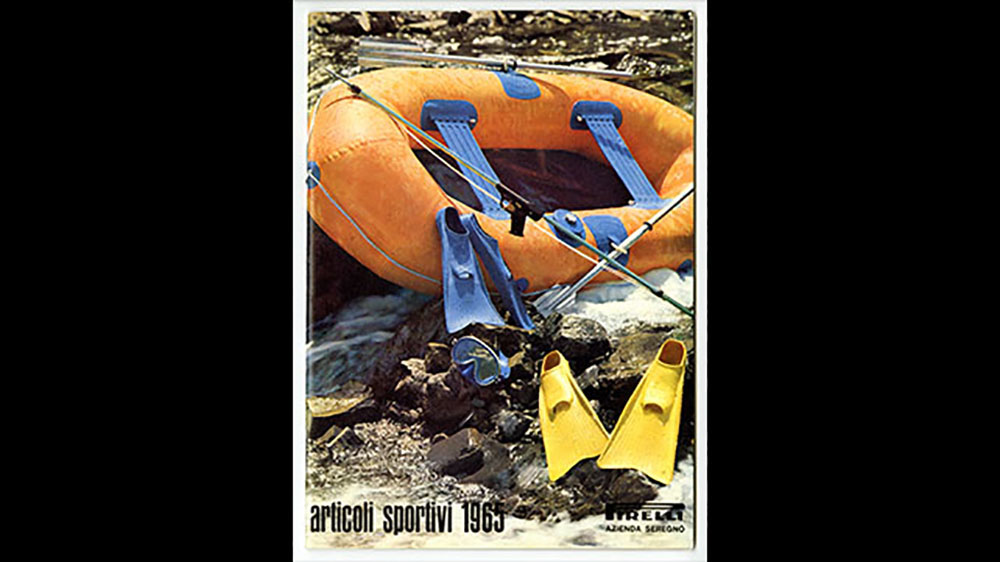 And then we have: “It is widely known that women are more beautiful by the sea.” That’s how the article Donne al mare (Women by the Sea) by Gianni Manzini begins, written for Pirelli Magazine in 1956. “Because the nakedness revealed by a skimpy bathing suit makes them look more attractive? No: it’s the happiness that does it.” That may be, but it was the bathing suits which illustrated and filled the pages of the article: from the Zalar model, “tightly fitted due to its thick elastic curls”, to Artena “with irregular panels” and Armonia “accentuating the neckline”.

One of the girls in Lastex - on page 43 -   seems to be about to enter the water in an orange Nautilus. A lot of things can happen when you are by the sea with Pirelli, including taking to the water on an inflatable boat. The “rubber dinghy” – made by sister company Azienda Seregno – is the motorisation of the masses reflected in the water: freedom, adventure, and the desire to move far away from the madding crowd. At the time of Lastex and Gianni Manzini, the Pirelli boat is bright orange and goes by the name of Nautilus, and the girls onboard smile with a happy, innocent air. A rubber dinghy as a mirror of the times: a decade later it had become the Laros, blue and grey, and the girls onboard would look at the photographer with a serious, confident expression. One of them is wearing a diving suit, has a dagger attached to her leg, and is preparing to dive with a mask across her face. Away, towards the underwater depths, with a serious, intense gaze.

And here another diving mask from Pirelli comes to mind, of many years before – it was 1949 – and another particularly intense gaze; that of Ingrid Bergman. Il miracolo della pesca subacquea (The Miracle of the Underwater Fish) is the title of the article from Pirelli Magazine n°3/1949: by the sea at Strombolu, the director Rossellini takes Ingrid with him to the bottom of the sea. She closes her eyes as she puts on the mask: “It’s like the enchanted landscape of my Scandinavian fables,” she would say as she reemerged.

Coming out of the water, she doesn’t remind us of Scandinavian fables, but rather of an octopus, unlikely to let herself be caught by Ian Fleming – creator of the secret agent 007 – in “Octopussy”, in 1966:
“You know what?" said Major Dexter Smythe to the octopus. "You're going to have a real treat today if I can manage it." He had spoken aloud, and his breath had steamed up the glass of his Pirelli mask. He put his feet down to the sand beside the coral boulder and stood up. The water reached to his armpits. He took off the mask and spat into it, rubbed the spit round the glass, rinsed it clean, and pulled the rubber band of the mask back over his head. He bent down again.

Okay. Nothing feminine about that last part. Unless the octopus...

Pirelli and the Compasso d’Oro Award