We meet with Pokras Lampas, the master of modern calligraphy, and the artist chosen by Pirelli to illustrate its 2015 Annual Report

Home life From calligraphy
to graffiti

‘Think modern,’ seems a good motto for Pokras Lampas, one of the most interesting and innovative new artists to hail from Eastern Europe. It is a sentence he repeats often, when we meet up with him for his Milan interview. It is a cold morning in March, and Lampas is visiting the city in northern Italy to work on ‘Every Mark Is Unique’, the project that he has been commissioned by Pirelli for its 2015 Annual Report: twelve huge canvasses imprinted with the structure of twelve different fingerprints, which the Russian artist is inscribing with his signature brush, in a style known as ‘modern calligraphy’ (or 'Calligrafuturism'). 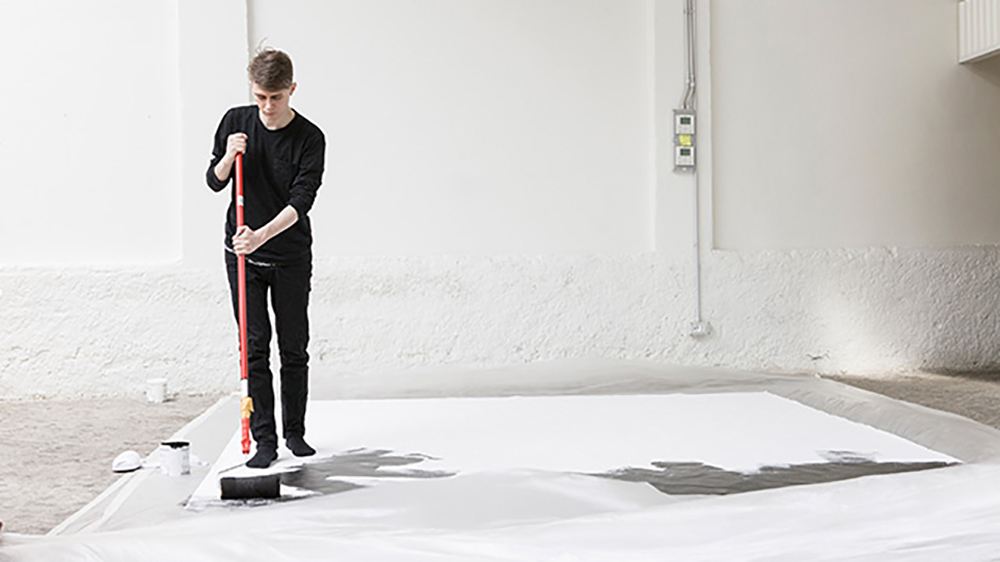 Lampas rose to fame in the contemporary art world thanks to his blend of classic and contemporary techniques; his ability to draw on the traditional aspects of calligraphy and to update it for a contemporary context, closer to street art. Lampas isn’t the only practitioner that is operating in this vein, but he certainly is one of the best-known names in the movement.

Lampas is completely self-taught: born in Korolyov (ex-Kaliningraad) in 1991, he grew up in Moscow and became the first modern calligrapher of his country. He first came up with the idea when meeting the street artists of the capital as a teenager. Fascinated by their graffiti, he decided to take the art form to the next level.

‘You shouldn’t be scared of doing something new, that breaks with tradition – even when you’re running the risk of being a little unpopular. I was the first artist to do modern calligraphy in Russia. It was something completely new, but people liked it, so it became a well-respected art form: soon I was touring fifteen cities, running workshops and showcasing my work.’ He tells us, as he’s taking a break between canvases.

The role of Niels ‘Shoe’ Meulman – one of the early adopters of the modern calligraphic style – was instrumental in solidifying Lampas’ reputation on the international scene. Though he enjoys interacting with his colleagues and other painters on the scene, Lampas makes sure to stay true to his individual style. ‘I’ve always wanted to do something that was wholly mine. It’s important to preserve your own style. Don’t steal others’ ideas; it’s about respect.’

This young artist attracted much attention from the mainstream press in 2012, when he carried out a beautiful project of modern calligraphy on ‘human canvases’, where the human body took the place of the canvas. ‘It was a good concept, but I also strived to secure an excellent photographer and good models – I wanted my project to be top quality in every aspect,’ he says of that experience.

Recently, he beat the world record for the largest modern calligraphy work ever carried out, covering the entire roof of a gigantic Moscow factory with his distinctive handwriting. It took two days of hard work and 730 litres of paint, for an overall surface of 1625sq metres, completed working in collaboration with the art collective Smokin’ Heroes. ‘I give myself no limits in choosing the tools or the size for my artwork,’ he explains. ‘I wanted to make something you could take pictures of from a satellite,’ he smiles. The whole process has been filmed by aerial camera and the footage is available on YouTube.

Lampas’ aim was for his piece to be visible on Google Earth. He admits that his work wouldn’t have been perceived as as valuable a few years back, when the general public had no access to satellite images, and there were no drones to make aerial photography quite so easy. Maybe the idea wouldn’t have occurred to him at all… because no one would’ve been able to see it.

Lampas, however, doesn’t see this as a paradox. To him, it simply means embracing the contemporary world: ‘We are living in the era of drones, in which satellite photography is immediately accessible. As an artist I have to feel comfortable with technology and use it as an inspiration,’ he says. ‘If you want your work to be modern, you have to think modern.’.