"Now we will figure it out and take I look inside"

Since the very beginning, Fondazione Pirelli adopted this phrase – the original in local Milanese dialect "Adess ghe capissaremm on quaicoss: andemm a guardagh denter” was uttered by Luigi Emanueli, the engineer who headed R&D for many years – as its motto for setting the tone for visitors. In its simplicity, the idea of taking a look inside to figure something out sums up the concept of science in itself, as application, study, research and systematic overcoming of obstacles. Doing science necessarily means capitalising on the knowledge and awareness offered by the technological heritage that Pirelli has accumulated in nearly one hundred and fifty years of operations. The Fondazione – and in particular the Archive it keeps, consisting of over three kilometres and a half of documents – is where this know-how is protected over time and where is has been deposited year after year to offer an all-encompassing view which is artistically represented by in the large mosaic entitled La ricerca scientifica(Scientific Research), made in 1961 on a drawing by Renato Guttuso, preserved in the rooms of the Fondazione Pirelli today. 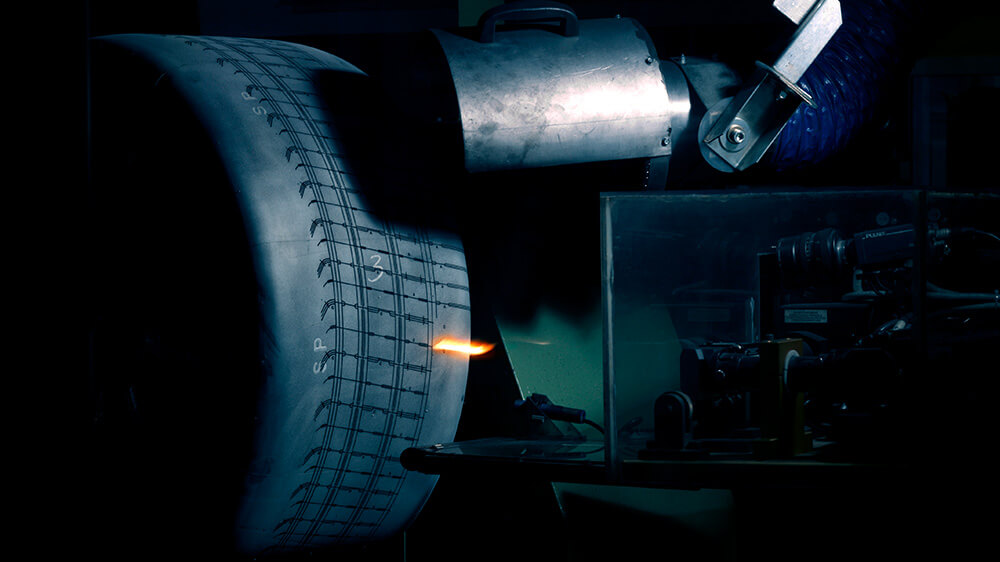 Integral part of the company heritage and included in the Italian National Library System, the technical-scientific library counts over 16,000 books on the history of rubber and cables from the 19th Century to the current day being a collection with no equals in the world. Only in the Fondazione, for instance, can readers browse the first copies of the India Rubber Journal (1888) and of the India Rubber World (1889), which are the oldest publications on the caoutchouc industry in the world. Another area of the Archive is home to a precious folder. It contains just a few typed sheets but its historical significance is outstanding. It is the contract with which Pirelli appointed Giulio Natta to start researching synthetic rubber in the Bicocca laboratory in 1938. It marks the beginning of a technological revolution. Natta would go on to win the Nobel Prize in 1962 for having invented plastic. Traces of his work are found in thousands and thousands of test specifications produced by the Tyre R&D department. These documents contain the word “Cauccital” for the first time, marking the beginning of the tests conducted on the man-made material that today is commonly employed in the rubber industry. The test specifications are kept in the Archive alongside technical sheets describing the size of tyre vulcanisation moulds, tread patterns and original sidewall markings, such as size, tyre type and company logo. After the early 1930s, these documents accompanied the development and evolution of all Pirelli tyres step by step, such as the large Stella Bianca and Cinturato “families”, the racing versions and the fabrics experimented in the “Cord” models. Directly supporting the current “Collezione” tyre production, this documentation has allowed vintage car experts to retrace the partnerships Pirelli and auto makers from initial prototype development to the final model launched on the market. By cross-referencing the technical details with the price lists of the time – we can trace these back to the first years of the 20th century – and with the extensive advertising production also kept in the Archives with over three hundred original airbrushed drawings, Pirelli can produce vintage style tyres which are absolutely correct from the historical and philological points of view but which implement all the safety standards offered by modern technology at the same time.

Fondazione Pirelli also provides services for schools to equip youngsters with tools for understanding the concept of industry today. By making documented reference to the stages of technical progress, students are introduced to current topics, such as robotics and Industry 4.0. The pinnacle is naturally collaboration with Universities. Fondazione Pirelli has been the pivot between knowledge and industry, research and technology for the Milan Polytechnic, the Turin Polytechnic, Bocconi University and Milan Bicocca University.