Because, as Gustav Mahler once said, "tradition is not the worship of ashes, but the preservation of fire"

It is 22nd June 2008: the Fondazione Pirelli is born. Almost ten years have passed and it is already time to tell the brief but intense story of an institution which was designed to safeguard and - even more importantly - to help people learn about and understand the long history of the company. 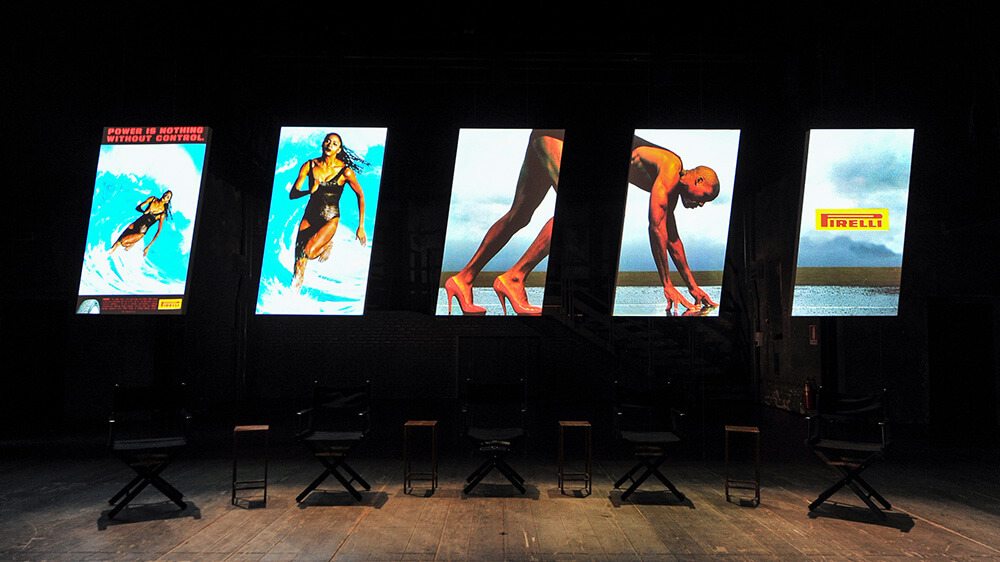 Because, as Gustav Mahler once said, "tradition is not the worship of ashes, but the preservation of fire." The Fondazione Pirelli opened to the public in April 2010. In the first few years the foundation began working on a range of projects, collaborating with other foundations and cultural institutions including the Piccolo Teatro and the Teatro Franco Parenti of Milan, the MITO SettembreMusica Festival, the MIC-Museo Interattivo del Cinema and the Fondazione ISEC, to name but a few. Many of the projects and activities of the foundation originate from the processing of the company's Historical Archive, which has enjoyed the protection of the Lombardy Sovrintendenza Archivistica since 1972. Between 2009 and 2010, we transferred the archive to the building which houses the Fondazione Pirelli, the historical Fabricato 134, now known as the Stella Bianca building and restructured to be able to conserve this immense heritage. More than 3.5 km of documents and countless works of art: the celebrated painter Renato Guttuso's preliminary sketch from for the mosaic “La ricerca scientifica” and realised by the Academy of Fine Arts in Ravenna; the extraordinary photography of Luca Comerio from 1905, and thousands of advertising drafts, designs and photographs, some of which came from the various offices of our Headquarters and were 'handed over' especially for the opening of the Fondazione Pirelli. They are all evidence of the deep ties between Pirelli, art and design, together with the precious objects preserved by the foundation such as Meo Romeo the cat and Zizì the monkey (winner of the Compasso d'oro prize in 1954), toys made from foam rubber by the designer Bruno Munari and a petrol can from the architect Roberto Menghi, an innovative container which has also been exhibited at the MoMA in New York, where an advertising poster for Pirelli tyres by the artist Massimo Vignelli was also kept. To further enhance this great patrimony, in 2010 we began an intense campaign of restoration of more than 2,000 documents and the entire archive of cinematic film, as well as categorizing more than 15,000 different pieces and 20,000 articles from the national and international in-house publications such as the Pirelli magazine. And to showcase the story of Pirelli style, we have also devised and curated many exhibitions over the years. The first, Un viaggio, ma... (A journey, but...)(2008), was staged for The Milan Triennale and tells the story of the Pirelli Cinturato; in 2010 came About a tyre, a photographic journey created in collaboration with NABA, the New Academy of Fine Arts in Milan, to communicate the values of our company. In 2011, at the Milan Triennale we presented an exhibition which has probably made the biggest impression so far, winning the  prestigious 2013 Red Dot Design Award: L’anima di gomma. Estetica e tecnica al passo con la moda, sull’innovazione di Pirelli nel campo della moda. (The Soul of Rubber. Esthetics and technique in step with fashion), dealing with Pirelli's innovations in the fashion world.The same year saw another exhibition created to tell the story of Pirelli in motorsport  called Si va che è un incanto (It goes without saying that it's a charm). And next came the exhibitions L’umanesimo industriale di Pirelli (The industrial humanism of Pirelli, 2012), Pirelli e l’Italia in movimento (Pirelli and Italy on the move, 2013), Pirelli: un racconto d’inverno (Pirelli: a winter's tale, 2014) and Pausa pranzo: tra casa e lavoro cento anni di Italia a tavola (Lunch break: between home and work, 100 years of Italy at the dinner table, 2015), each of which interpreted different aspects of our company. And more recently: Le Architetture dell’industria (Architecture of industry, 2015); Pirelli, la cultura sostenibile (Pirelli, sustainable culture, 2015), percorso tematico sull’evoluzione della gestione sostenibile di Pirelli dal 1872 a oggi (A journey through time on the evolution of sustainable management of Pirelli from 1872 to today) and finally Pirelli in cento immagini. La bellezza, l’innovazione, la produzione (Pirelli in 100 images. Beauty, innovation, production), which was inaugurated in January 2017 at Settimo Torinese. And not only exhibitions.There has also been a wide range of publishing projects curated by the Fondazione Pirelli. The topic of the factory takes centre stage: Racconti di lavoro (Tales of work, 2008, Mondadori) and Voci del lavoro (The voices of work, 2012, Editori Laterza), which led to the theatrical play  La fabbrica e il lavoro (The factory and work), performed at the Piccolo Teatro in Milan and directed by Serena Sinigaglia. There were also two volumes published by Corraini in 2015 and 2017 and dedicated to the history of communication of the Pirelli Group over the last 140 years: Una musa tra le ruote. Pirelli: un secolo di arte al servizio del prodotto (A muse among the wheels. Pirelli: a century of art in service to the product) and La Pubblicità con la P maiuscola. La comunicazione visiva Pirelli tra design d’autore e campagne globali (Advertising with a capital P. Pirelli visual communication between design masterpieces and global campaigns). The next publication will be Il canto della fabbrica (The song of the factory, Mondadori), a combined book + DVD detailing the unforgettable experience of the concert composed by the violinist Francesco Fiore and performed in 2017 by Salvatore Accardo's Orchestra da Camera Italiana in the Packaging Department of our Settimo Torinese Industrial Zone. But how can the younger generations learn about the values of our company? That's how the idea of Fondazione Pirelli Educational came about, a free program of educational courses for schools which began in 2013 and which has so far seen the participation of approximately 12,000 children and teenagers in courses on subjects ranging from tyre technology to advert design and from sustainability to robotics.And now it's time to celebrate together these first ten years.