The catamaran “Lo Spirito di Stella” sets sail in Miami. The transatlantic voyage of Andrea Stella and his crew for the rights of people with disabilities starts with the goal of breaking down barriers of all sorts.

Miami, 26 April 2017. After over ten months of lively preparations, at 1 o'clock in the afternoon local time, the catamaran “Lo Spirito di Stella” weighed anchor and set sail for Norfolk, Virginia, the first stop of a six-month voyage that will be taking it from the United States to Europe in the name of the rights of people with disabilities. The WOW – Wheels on Waves Project is the brainchild of the “Lo Spirito di Stella” Association and its mission is to promote awareness of the United Nations Convention on the Rights of Persons with Disabilities, to foster its adoption by all countries and to break down the barriers – architectural and physiological alike – that people with disabilities are forced to deal with. 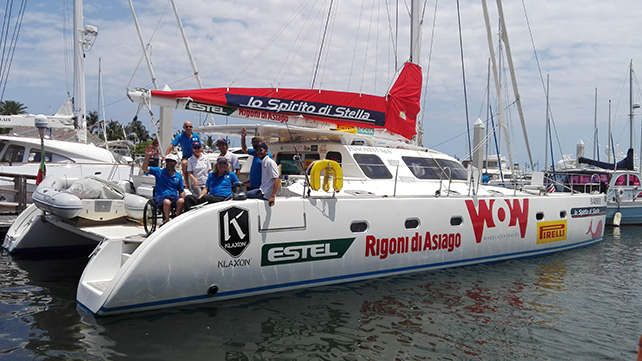 A three-day celebratory event was staged in Miami before the “Lo Spirito di Stella” set sail. On Monday 24 April, with the collaboration of the Education Office of the Italian Consulate in Miami, the captain of the WOW Project Andrea Stella visited the Met School of Miami to present the voyage and introduce Pinksie the Whale to the children. Pinksie is an educational project which began in London in 2002 with the mission of teaching children about the value of diversity and will be with WOW for the entire crossing.
The children stepped aboard the “Lo Spirito di Stella” the day after, on Tuesday 25 April, to visit the only catamaran free from architectural barriers in the world.

Miami is particularly significant for WOW, and especially for WOW founder Andrea Stella, who lost the use of his legs in this city after having been shot twice by thieves attempting to steal his car seventeen years ago when he was enjoying a holiday after graduating from university. His life has changed greatly since then.

Today, Miami is a happy place for WOW: it the starting point of an extraordinary journey which will take many people, disabled and not, onboard. In a few days' time, the crew will be given the Convention on the Rights of Persons with Disabilities by United Nations Secretary-General Antonio Guterres and the task of handing it personally to Pope Francis in September in Rome.

The many friends and partners who enthusiastically supported the WOW project from the very beginning flocked to the Coconut Grove Marina to bid farewell to the “Lo Spirito di Stella”.

Pirelli is also wishing fair winds and calm seas to the “Lo Spirito di Stella” and to all the crews who during the nineteen legs of the voyage will alternate on the catamaran bringing their stories of strength, enthusiasm and determination with them.

Across the ocean,
across all barriers

See you at my place

Of paper and nature