Entering in the world of Joan Jonas: a start point

Home life Entering in the world of Joan Jonas: a start point

Entering in the world of Joan Jonas: a start point

Joan Jonas’ voice is loud and clear as she discusses a book that covers her artistic career from the Sixties to the present with Andrea Lissoni- curator at Pirelli HangarBicocca for seven years and now curator at the Tate Modern in London. 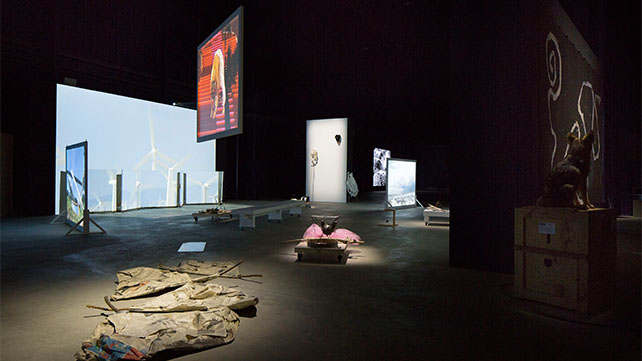 A pioneer in performance art and a truly eclectic artist, Joan Jonas is now eighty. In her continuous and enduring research she has combined video, sculpture, dance, theatre, singing, music, drawing and writing, while her performances based on props, children or animals often forced the constraints of exhibition spaces, allowing the artist to explore the power storycrafting and the human body’s possibilities of transformation and disguise.

Following the closure of her first major solo exhibition in Italy "Light Time Tales" curated by Andrea Lissoni for Pirelli HangarBicocca in 2015, Jonas has represented the United States at the 56th Venice Biennale with "They come to us without a word". This well deserved celebration is now revived by "In the Shadow a Shadow: The Work of Joan Jonas"– an ambitious and exhaustive publication curated by Joan Simon and issued by HangarBicocca in partnership with Gregory R. Miller & Co and Hatje Cantz.

This rich monograph may be considered an extension of the exhibition itself, although it goes far beyond that. As Andrea Lissoni underlines, the book is the fruit of ten years of work and contains hundreds of images, archive documents and large reprinting of video and performance acts– a massive body of work interwoven with notes and critical insights. The publication is shaped around Jonas’ investigations, following their typical development through cross-references, echoes and mirrors. These were at the core of the exhibition in Milan, where Jonas’ works shared the building’s large dark space and surfaced from the obscurity in their unstable radiance.

“I prefer the spaces of a factory to those of a white cube” is Jonas’ comment about the show in a video she shot inside the Hangar, later projected during a panel on the volume introduced by artistic director Vincente Todolì on March 9th 2016.

She’s fascinated by the disquiet nature of a space with its own history, originally not meant to host artworks. Not surprisingly, Jonas was always devoted in disintegrating the monolithic assumption of “oeuvre”. The sumptuous Hangar space has enabled the artist to emphasize the multilayers in her body of work, which draws its boundless and variegated energy from different manifestations of the past– folk traditions, legends and myths.

In the exhibition at Pirelli HangarBicocca, old-early films and installations called upon each other through symbols and affinities. In occupying the same space, video and objects belonging to different projects mingled and shared a conversation; the sound of one stretching toward the shape of another. In the same way, a conversation on multiple levels takes place within the book, enriched by the contributions of Johanna Burton, Barbara Clausen, Douglas Cromp, Susan Rothenberg and Richard Serra. However, what makes this publication unique is the voice of the artist herself, which is as strong and precise in public while she discusses her prominent work.

Jonas’s powerful say has reshaped and will continue to redefine contemporary art, and now is finally channelled in a publication that aims at being a departure station rather than a destination, at least in Andrea Lissoni’s take on the artist. The monograph means to open the way to new contributions, shows and discoveries, so that every reader can appreciate the role of one of the greatest artist alive.

The future language:
a trip into Adam Thirlwell's literature