From 12 September to 19 January, the Shed at Pirelli HangarBicocca hosts A Leaf-Shaped Animal Draws The Hand, the biggest exhibition ever devoted to the artist: more than twenty works that explore the relationship between man and nature

«When I was small I dreamt of being a biologist. I was obsessed with tropical forests: then I encountered maths and chemistry, persuading me to become an artist», jokes Daniel Steegmann Mangrané. «The first time I entered the Mata Atlântica rainforest – he says - I felt as if I’d taken a powerful drug. All of my senses were heightened».

This is nearly what viewers experience when they immerse themselves in 16mm (2007-2011), one of the most beautiful works exhibited in the Shed at Pirelli HangarBicocca. This is a film that works at two levels: the emotional level, which draws the visitor into a natural landscape using images, the sounds of foliage and the buzzing of insects, and the formal level, which echoes structural film techniques (each meter of film shot in the forest exactly corresponds to one meter of the path travelled within it).

In his artworks Mangrané explores the relationship between human beings and nature, blending the natural and artificial worlds and investigating the complexity of ecological systems through geometric shapes and abstract patterns. Born in Barcelona in 1977, the artist settled in Rio de Janeiro in 2004: today he is a participant in Capacete, a non-profit initiative for artist residences, and teaches at the Parque Lage school of visual arts. 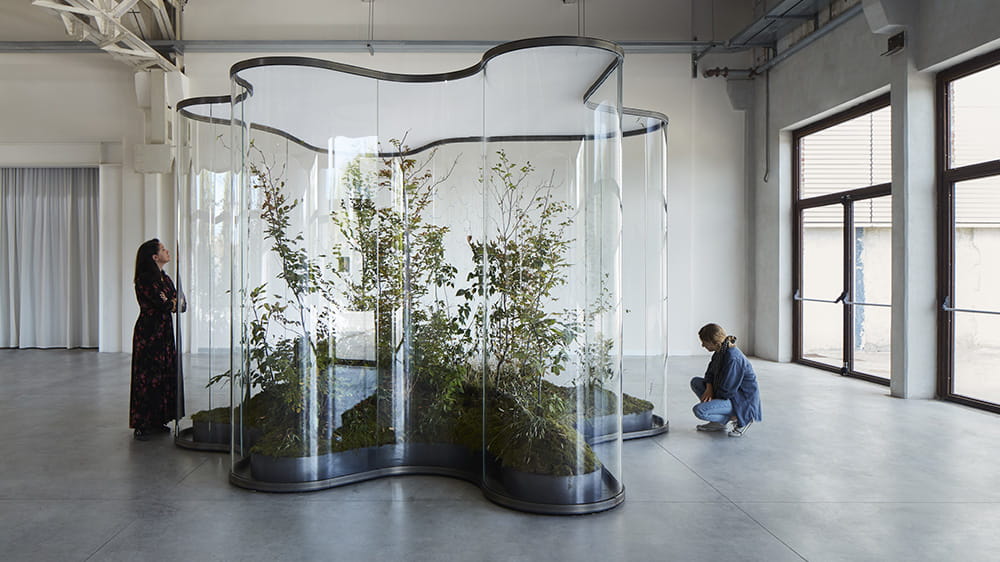 His influences include the Brazilian artists Lygia Clark and Hélio Oiticica, pivotal figures in the Brazilian Neo-Concrete Movement, and the Brazilian anthropologists Eduardo Viveiron de Castro and Tânia Stolze Lima, whose radical theories he explores. A Leaf-Shaped Animal Draws The Hand is his first exhibition in Italy and his largest ever: it presents over twenty works created since 1998 ranging from films, virtual reality settings, 2D holograms, sculptures and installations.

Magrané’s work revolves around a series of recurring subjects: fundamental among these, for example, are the Mata Atlântica, one of the forests with the richest biodiversity which stretches along Brazil's Atlantic coast as far as Paraguay, and the stick insect (scientific name: phasmid) - known for its ability to camouflage itself within its resident environment, an emblematic meeting point between the plant and animal worlds. The phasmid appears in many of his works, including the large terrarium entitled A Transparent Leaf Instead of the Mouth (2016-2017) and the film Phasmides (2012), which demonstrates the insect’s apparent fixity in relation to the gradual transition from a natural to a geometric environment.

Another important symbol is that of the leaf, embodied by the work Elegancia y Renuncia, (2011), in which a dried leaf engraved with small circular designs, held up by a backlit support designed by the artist, takes on the function of a module that represents the complexity of the entire ecosystem.

At the centre of the exhibition is Lichtzwang (from the title of the poetry collection by Paul Celan), a series of watercolours begun in 1998 - and still being produced - on 21 x 15 cm graph paper sheets. The watercolours are installed in a dynamic relationship to the rest of the exhibition: the viewer can move along the sequence while catching glimpses in the background of the other works inspired by Lichtzwang, a generative matrix of ideas, shapes and projects.

Enabling this special effect is Phantom Architecture (2019), a unique installation specially conceived for the spaces of the Shed: a series of walls in transparent white fabric (the artist calls them “gentle sculptures”) which soften the industrial character of Pirelli HangarBicocca, accommodating and revealing the exhibited works. Elements as light as membranes that divide the spaces, their transparency enabling a unified view of the entire exhibition.