For the first time the exhibition gathers together a collection of works created by Giorgio Andreotta Calò from 2008 until the present day, all united by the attempt to describe in pictures and sculpture the movements with which the present is transformed into the past

Home life CITTÀDIMILANO, an immersion through the shapes of time

One of the works chosen by curator Cecilia Alemanni for the Italian Pavilion at the 57th Venice Biennale (2017) - Senza Titolo (La Fine del Mondo) by Giorgio Andreotta Calò - occupied a large space submerged in semi-darkness. Invited to climb up some metal steps, observers were confronted by a surreal scene: the old, vast structure of the ceiling appeared both above and below them. Only by concentrating on the inverted image was it possible to spot imperceptible vibrations suggesting the presence of water. This imposing work perfectly encapsulated themes that have always deeply appealed to the artist, who was born in Venice in 1979: water, doubles, light and darkness, time and movement as powerful yet almost invisible forces of transformation. 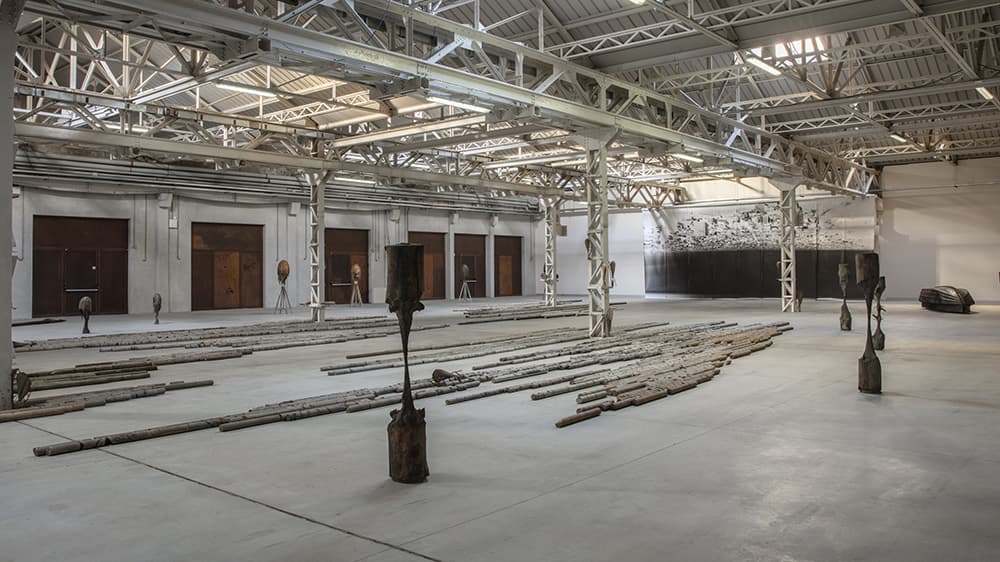 These same elements welcome visitors ready to immerse themselves into CITTÀDIMILANO, an exhibition curated by Roberta Tenconi that brings together, in the voids of the Shed at Pirelli HangarBicocca, sculptural works created by Andreotta Calò from 2008 until the present day and arranged according to the artist's own conception. On show from 14 February to 21 July, the artist's work takes shape as one single landscape, an archipelago in which above-surface and submerged elements coexist (a key work for understanding Andreotta Calò’s method is an installation he created in 2010 at his Amsterdam studio: after dividing it with a glass wall he filled one part with water, causing the glass to break unexpectedly with the water flooding the entire space). In the projection that opens the exhibition we see a group of divers descending towards the seabed until they come across the wreck of the steamer Città di Milano, which today, precisely 100 years after it sank on 16 June 1919, still lies at more than 90 meters’ depth off the island of Filicudi. Built for Pirelli, the Città di Milano was the first Italian ship to lay and monitor undersea cables to connect the lesser islands of the Mediterranean. The ship gives its name to the exhibition and is its symbol, evoking the processes of transformation and the idea of something that is submerged, invisible on the surface.

The Carotaggi (created from 2014 with the last work, Produttivo, dated 2019), with geological samples taken from the subsoil of the Sulcis Iglesiente in Sardinia and from the Venice lagoon, define the exhibition space. Also exhibited is the video In Girum Imus Nocte, 2014, which follows a nocturnal journey walked with a group of miners, again in the Sulcis, and the Clessidre, perhaps the artist’s most enduring (the first dating to 1999) and well-known series of works. All works in bronze (those exhibited include the triptych Scolpire il tempo [Sculpting in Time - 2010], the title of which recalls the celebrated written work on the cinema by Tarkovskij), are created using the lost wax casting process based on the symmetrical overlapping of a section of posts driven into the bed of the lagoon as boat moorings (known to the Venetians as bricole), corroded in line with the part under water. Using fragments of bricole as the basis, over the years the artist has also created a series of Meduse, sculptures exhibited both in their original version, in wood, and in their bronze rendition, created by lost wax casting. The many works on show also include a number of the artist’s major performance activities that were subsequently transformed into sculpture, for example Volver, the boat with which, in 2008, the artist “navigated” the sky above Lambrate, in Milan. Hovering like a theatrical backdrop over this surreal landscape, which plays with the concepts of navigating matter – air, land, water – and non-matter – time – is the imposing Città di Milano (about 5 meters by 11), a photograph specially created for the exhibition using a camera obscura built by the artist on the top floor of the Pirelli Tower: an inverted horizon in which the sky takes the place of the sea and the buildings of Milan look over us from above.