Home life Christmas in the Pages of Pirelli House Organs

How many Christmas performances have children in Pirelli nurseries and after-school put on around the world? How many letters to Santa Claus were received by the Azienda Articoli Vari in Rome, which produced Pirelli toys in rubber? How many panettoni have been through the gates of the factories? Christmas is the most global of all festivities, uniting and bringing together different cultures in all societies. It is celebrated in every corner of the world of Pirelli, even though perhaps with different customs and different symbols: but it is always unique and powerful in its ability to bring people together through the ages.

Countless December issues of the Group’s house organs have devoted their front covers to the magical festivity of Christmas, everywhere in the world, with an almost unique intermingling of cultures.
Some of the prettiest, cheeriest, and most colourful covers, for example, are those of Noticias, the magazine of Pirelli Brazil. “Bom Natal”, in other words, with Father Christmases in the branches of a tree decorated with bananas and grapes: “Feliz Natal e próspero 1969”, and who cares if the children are wearing short-sleeved T-shirts under a blazing sun. Also the Argentinean children of the Páginas Pirelli would find summer clothes under their twinkling tree. Clutching their presents tightly, the pirelitos brought “Fraternidad, Paz y Trabajo”: it was 1956, and the house organ of Pirelli Platense, an Italian enclave in the land of Argentina, had just celebrated its first anniversary. 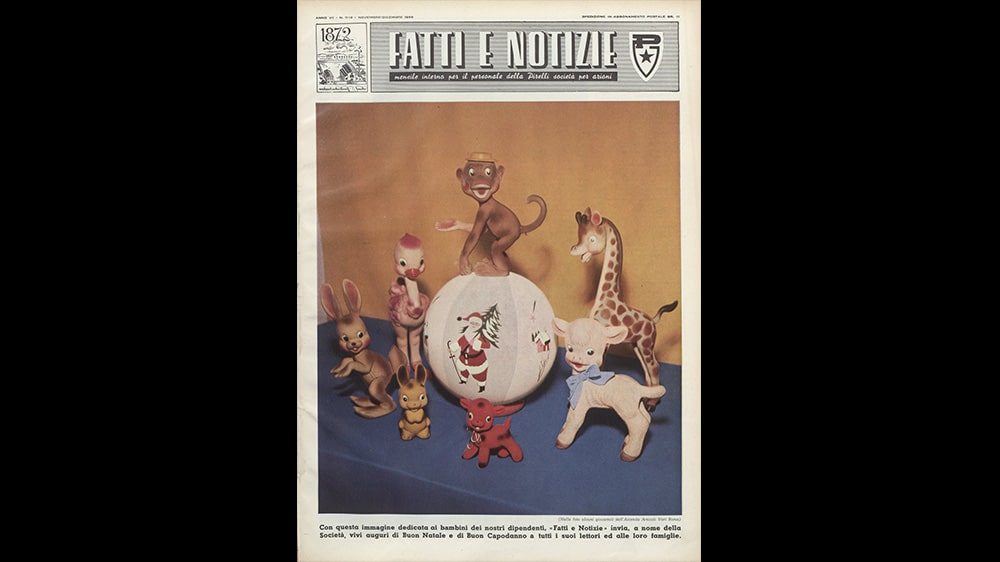 “Products from Burton-on-Trent” appeared at Christmas for the family on the cover of Pirellicon in December 1959. The house magazine of Pirelli Ltd in Britain was a celebration of everything that Pirelli produced in the late 1950s: warm slippers and a comfortable reclining armchair for Mum, toys made of rubber for the children. Dad, wearing his jacket, tie, and Pirelli slippers, received no less a gift than a tyre – or rather four, one might hope – a Pirelli BS3, the technological marvel of 1959. In the same years, the Spanish Hechos y Noticias created an atmosphere somewhat closer to the classical symbolism of Christmas: a Nativity in ceramic with the Sagrada Familia in the background for Navidad 1955, and a terracotta shepherd under a decorated fir tree branch for 1956. And then, of course, a dedication to the Three Kings, who are almost more important than Father Christmas in Spain, in the sixteenth-century stained-glass window of the Cathedral of Nuestra Señora de los Reyes in Barcelona for the December 1958 issue. An artistic touch for Christmas in the Greek house organ Ta Nea tis Pirelli Hellas, with Father Christmas bringing gifts by car – with Pirelli tyres, of course – through the sky, designed by Riccardo Manzi. The Parthenon appears in the distance.

And then, of course, plenty of Christmas-themed covers both for the Fatti e Notizie company magazine and for Pirelli, the highly successful publishing operation that ran from the 1940s to the 1970s. Two covers of the Rivista Pirelli sum up a whole world of festivities under the banner of the Long P. December 1949: In the long-awaited post-war period, children can at last dream about Meo the Cat, the Susy doll, Rempel toys, and coloured balloons. December 1960: the mechanical Father Christmas was the brilliant idea of the designer André François, who together with colleagues such as Ezio Bonini, Sandro Mendini, and Renzo Biasion once again made the Pirelli magazine, under the guidance of Arrigo Castellani, a faithful mirror of its age.

The entire Pirelli magazine is available in the area of our website devoted to the online Historical Archive, which will soon be completed with the publication of the Noticias Pirelli (Brazil) and Páginas Pirelli (Argentina) house organs.