#FondazionePirelli and NABA together to decorate the children’s unit at Niguarda. Younger patients can now benefit from the Amici in Viaggio project

An actual restyling with appealing animals decorating the walls of the children’s unit at the Niguarda hospital in Milan. An area now filled with colour, fantasy and fun. And above all suited to welcome young patients at Niguarda. 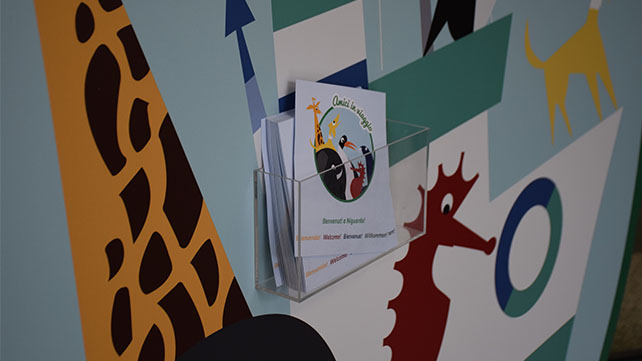 The Amici in viaggio or “Travelling Friends” project is the product of a partnership between Fondazione Pirelli and the Nuova Accademia delle Belle Arti (NABA) in Milan which together created characters who accompany young and very young patients inside the hospital to help them overcome the difficulties experienced there. The students on the specialist two-year communication design course were inspired by the cover of a Pirelli toys catalogue from the 1950s kept in the company’s historic archive.

The characters created by NABA - Fred the penguin, Barba the elephant, Mimì the seahorse, Tita the giraffe, Dado the dog and Ginger the seal - are featured in imaginative and interesting settings, surrounded by luxuriant and unspoilt nature and, as well as making the children’s unit more cheerful and welcoming, also play a practical role inside the hospital, acting as a sort of signage to indicate the various areas. The pictures decorating the unit narrate the stories of the single characters who, in times of difficulty, find help and support from their friends. This is what happens to Fred the penguin who, in the Savannah to celebrate the birthday of Barba the elephant, suffers from the heat and asks his friend for a solution in order to cool down. Tita the giraffe therefore takes action with the other friends to find some ice for her companion in adventures.

The aim of these stories is to put over to the young patients the importance of friendship, a crucial value for overcoming life’s hurdles. By identifying with the likeable animals depicted on the walls, the young patients, strengthened by support from new friends, are motivated to overcome their fear and face reality with greater peace of mind.

Thanks to a video installation in the corridor ahead of reception in the department the children can also interact virtually with the animals, jumping on their favourite character and changing the scene settings as they prefer. In this way active involvement, wonder and emotional involvement become the means for giving the children courage and making them take a lively leading part in a journey in the company of special friends.

The project in association with NABA is part of ongoing involvement by Fondazione Pirelli in updating its historic heritage and showcasing the creativity of young talents with major focus on the area in which it operates.

This is not the first time that the paths of Pirelli and those of the Niguarda hospital cross. The joint work and support supplied by Pirelli to the hospital in fact date back to 2008. From that year onwards Pirelli Tyres Romania, in a partnership with the Milan hospital, has supported the training of doctors and nurses and the donation of medical instruments and equipment to the hospital in Slatina, where Pirelli has a plant. Through this project over 250 professionals were trained, in particular in the areas of oncology, paediatric care, dentistry and first aid.

The partnership with NABA is also now firmly established. The exhibition About a tyre dates back in fact to 2011, with an installation of 22 visual works, commissioned by Pirelli, by 11 students from the photography course at NABA who had been asked to interpret with total freed of expression the corporate values developed around issues such as innovation, safety, speed and eco sustainability. The most meaningful photos were then used by Pirelli to illustrate that year’s annual report.

How Pirelli goes beyond CSR and puts sustainability at its core