The Hockey World Cup is to take place between Moscow and St. Petersburg. The best national teams will challenge each other for a place on top of the world. And Pirelli is not sitting there doing nothing about it

Every year since 1920, the best ice hockey players hone the skate blades, put a shine on their sticks, prepare their protective padding and team uniforms to challenge each other on ice. Matches of frenzied rhythm comprising speed, technique plus the spirit and will to win.

For those who are not ice hockey enthusiasts, we advise you to see the 2004 film “Miracle”, directed by Gavin O’Connor, that tells the story of the massive sports undertaking that took place during the United States team selection for the 1980 Winter Olympics.

The 2010 Winter Olympic Games in Vancouver between the USA and Canada are also worth mentioning. That was a match full of significance: as well as the simple and obvious reasons of geographical circumstances, the long-standing rivalry between the two countries has always existed. It is easy to recover an integrated video from YouTube of the whole match: we would advise you to see it for its competiveness, adrenaline, warmth of the spectators and the impassioned atmosphere that emerge from the pictures at that crowded ice rink. All of those elements make ice hockey a unique and passionate sport. One it is difficult, even for the non-enthusiasts, to tear their eyes from the TV screen with a match of that kind raging away.

To return to today, ice hockey is one of the most popular sports played in the Nordic countries: Canada, Russia, Sweden, Finland, the United States, the Czech Republic and Switzerland, and that’s just to give an idea of the world rankings. As opposed to other sports, the Hockey World Cup takes place each year: in 2016 it will be Russia that will host the most heartfelt series involving the national teams: from Friday 6 to Sunday 22 May, the Russian ice will boil again with the will to win and the blades of the stars of ice hockey. 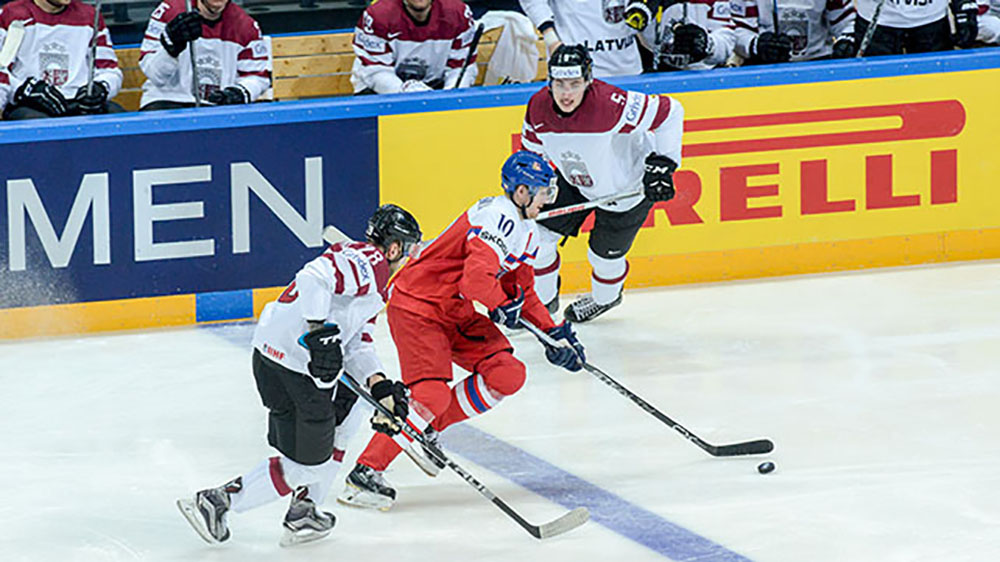 Russia is a strategic country for Pirelli: many initiatives are organised for the company’s local tyre dealers and the employees of the Kirov and Voronezh factories, as well as the local population, for which there is always special consideration and a deep sense of closeness. Just to list a few of Pirelli’s social activities: collaboration with the Kirov orphanages and support for the children who live in them, giving them a chance and means of guided training visits to discover the professional opportunities on offer. Or the donation by Pirelli to the city of Kirov of a replica of the Itala, the car in which Prince Scipione Borghese with his chauffeur/mechanic Ettore Guizzardi plus Corriere della Sera journalist Luigi Barzini managed to achieve a unique success. They won the 1907 Peking to Paris marathon that ended up in books on contemporary history, cars, long distance racing and journalism: Barzini’s book was one of the first examples of reportage from the extreme Orient that was almost in real time. A revolutionary success and almost unthinkable at the time: and it is certainly not a simple journey to make even in these modern times.

Returning to the current event, the Hockey World Cup is being played at ice rinks in Moscow and St. Petersburg. The battle started on 6 May and will continue until the 22nd of the month. Pirelli is one of the main sponsors of this important event. The company has organised various initiatives in order to involve the enthusiasts, Russian citizens and fans of ice hockey, who come from all over the world to watch the matches live.

The activities organised for this important sporting event are many and varied. Among them will be the presence of the Formula 1 show car fitted with studded tyres, and a driving simulator. An initiative that always attracts many enthusiasts – and not just those from the world of motor racing. Show tyres, but Pirelli is not unprepared when faced with extremely cold conditions. For that, the company has brought out its Pirelli Ice Zero tyres, which were born of a project enabling motorists to drive in complete safety on ice and snow, conditions which are frequent during the winter months, and not just in the Nordic countries.

All of this is taking place, of course, outside the ice rinks.

But the celebrations continue inside the rinks. Tours for the children of the Kirov orphanages have been organised, taking them on a visit to the City of Moscow and the ice rink, with the chance to discover the many professions that the world of ice hockey also offers. CEO of Pirelli Russia, Aimone di Savoia Aosta, will be there on the ice to present a trophy to the Saturday’s best player.

In addition, there will be a VIP hospitality area, Skybox and activities for children, all organised by Pirelli. And that’s without forgetting initiatives concerning the Russian radio stations, TV channels and media to talk about the 2016 Hockey World Cup.

Pirelli has stamped its presence on the most important sporting event in Russia: our brand has always been closely associated with the world of sport. With those on ice, too.

When Lada made
a supercar

More than 140 years
of high performance excellence
coming to America