Meet Freekhand: our guest at Monza for GT. But we’ve inspected his hands, and they both look perfectly normal

Home life An alternative take on GT at Monza

State of the art
Freekhand, a.k.a. Miguel Herranz, is not actually a freak at all. In fact, you’d probably miss him in a crowd: he blends easily into the background – an attribute no doubt useful in his profession – as an observer rather than a participant. Quiet and understated, he’s far from your typical Spaniard either. Conversation is not his medium of choice; instead it’s all about art.
The illustrator came to Monza’s round of the Blancpain GT Series from his native Barcelona to capture a unique take on all the action, rapidly drawing everything that caught his imagination.
His art is spontaneous and genuine: he’s not a particularly die-hard fan of racing, which means that his inspiration is influenced purely by the aesthetic rather than any particular brand or tribal loyalty.
His day job is producing illustrations for advertising, and while Monza was a new experience for him, he’s very familiar with Italy: he spent nine years working as an illustrator in Bologna before returning to Spain.
“I like cars, but in an abstract way, there was no one thing I supported,” he points out. “But in motorsport, it’s not just about the cars. There’s an amazing atmosphere, which is made by people. This has a huge appeal for me, and this is what I try to convey.” 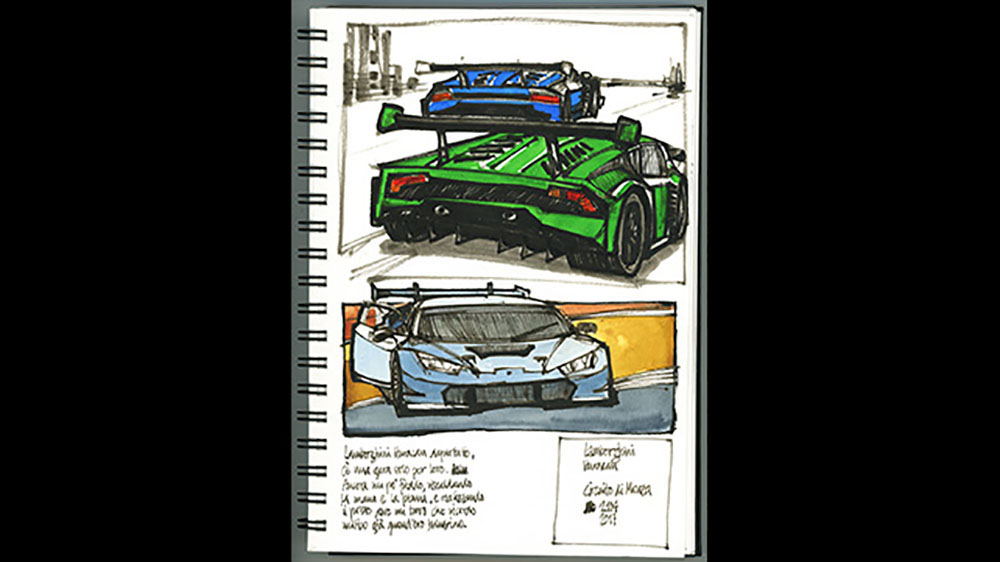 The Last Supper – with no Judas?

The team work is what attracts him; the dynamics of the interaction between engineers, drivers and fans. “On the one hand, I wanted to capture the obvious stars of the show: the cars and drivers,” he says. “One the other hand, I also wanted to draw the things that people perhaps don’t see: the work that goes on behind the scenes, the preparation and the concentration.”
He sketched around 15 drawings over the course of the weekend; ranging from small details that fascinated him, to full scale portraits of groups of engineers hunched over their desks, crunching numbers. A bit like ‘The Last Supper’, only with cars and computers. Each drawing can take anything from 10 minutes to an hour or more to complete, depending on the level of complexity.
Some teams are notoriously jumpy about having photographers close to the sensitive details in their garages – looking upon them as potential paparazzi, ready to give away every hard-won secret – but interestingly this attitude doesn’t extend to artists: the ancestors of photography.
“I was worried that I might get in the way when I was drawing in the garages, but that wasn’t the case at all,” recounts Miguel. “People stopped and were interested in what I was doing, even inviting me to come closer and look at other things too. It was great to feel so welcome. This is something that is really nice about the GT championship.”

Form meets function
Aesthetically, Miguel’s favourite two cars were the Mercedes AMG GT3 and the Bentley Continental. “I like them as there is something quite classic about both of them,” he points out. “The Italian cars are a bit more modern; a bit more aggressive. I like the softer lines of the Bentley in particular.”
One other detail that caught his imagination was the automatic air jacks fitted to each GT car, which allows them to be raised in seconds for tyre changes or other maintenance work. “To see these cars lift themselves up into the air is something very special: like they are alive!” adds Miguel.
That elemental aspect is something that he has always liked, which is why his motorsport culture, like many people growing up in Spain over the last 30 years, was steeped in the wilds of rallying.
“The design of the rally cars fascinated me; especially a few years back. Now all cars are more generic. If I had to choose one driver in history I appreciated most, it’s Carlos Sainz in the WRC.”
Sainz was hugely successful both in and out of Spain, inspiring a nation, whereas Fernando Alonso’s current struggles make painful viewing for his countrymen. “When I watch F1 on TV, I always cheer for Carlos Junior and Alonso,” concludes Miguel. “But it’s a lot easier to cheer for Alonso when there’s actually something to cheer about! At least in GT, McLaren is doing well…”

Worshipping at the
Temple of Speed