The American giant has celebrated its centenary. Everyone says: you can only really get to know the States if you take a trip on a Greyhound. All aboard! 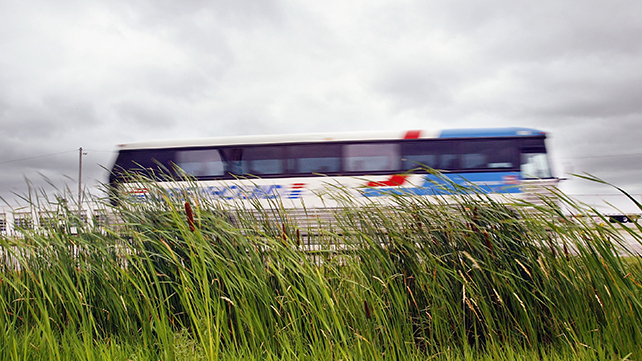 We do not know the exact date of the invention of the wheel but, based on archeologists’ reconstructions, the first one was attached to a sled and appears in a sketch made over five thousand years ago on a clay tablet found in Mesopotamia. It radically changed human life. The cart pulled by animals, still used in poorer countries today, relieved humanity of one of its hardest tasks, the transport of heavy goods, and the arrival of the stagecoach created a whole new way of travelling. But it was not till the 18th century that the first ones with a steam engine were invented, and only in the 19th century that the internal combustion engine arrived and rubber became the main material for covering tyres, which until then had been entirely made of wood. So transport as we know it has a very short history, driven by human ingenuity and innovation that has radically changed the fabric of society. One example is the story of Greyhound, symbol of America on the road, which celebrated its centenary in 2014.

FROM MINERS TO MILLENNIALS
The first journeys, 100 years ago, came at a cost of sacrifice, hope and 15 cents. The passengers climbing onto those grey and silver Greyhound buses were the miners of Minnesota. In fact, even the founders of the company were two unemployed miners who had emigrated from Sweden, Andrew Anderson and Carl Wickman, who had a brilliant idea. It was 1914. Today, the coaches they imagined reach 3,400 destinations daily in the United States alone. Those four wheels with the Greyhound logo became a symbol of the hope and at the same time the desperation of a nation that was embracing modernity.
The Great Depression, the Beat Generation, the struggle for social equality, the wars and strikes of the 1990s: the entire history of 20th century America is reflected in the Greyhound adventure. The miners have now given way to Millennials, the so-called the “2.0 Generation” who nonetheless continue to take the bus: these coaches have not lost their central role in American society. These days they have wi-fi and LCD screens mounted on the seat backs. Only the toilets have stayed the same. That’s America. Pirelli World climbed on board one of these juggernauts, a bit like Sal Paradise, Jack Kerouac’s literary alter ego and protagonist of his novel On the road. Pirelli’s journey starts in Washington, destination West Virginia.

ON BOARD, TOWARDS THE BELLY OF AMERICA
The symbol is still the same: the unique profile of the world’s fastest dog. And next to these behemoths of high-tech, steel and rubber, lined up at the departure gates for each route, are people of every race, age and profession. Here they are, all together: the university professor who throughout the journey keeps recording notes on his smartphone, like it was an old-style dictaphone; the waitress willing to face a full day’s journey just to spend a few hours with her family; the undergraduate student, already a professional traveller, armed with a convenient cushion; and the TV addict, who switches on her computer before we even move, not switching it off until the Greyhound bus has pulled into the final stop.
Along with them are a pair of tourists, a girl who spends almost the entire journey on the phone talking about a heartbreak, an elderly couple, a few lone travellers in varying degrees of irritation, and a young rapper wannabe. All involuntarily bound to one another for hours, heading for the belly of the United States, but separated from the rest of the world by those smoked glass windows, that have not changed over the years, and which do not vary across the fleet of over 1,200 coaches in daily service in every corner of America.

THE DRIVER AND THE MC
“You can only really get to know the States if you take a trip on a Greyhound,” everyone says. Indeed by boarding a Greyhound you discover real Americans, not just the real America. The driver serves as Master of Ceremonies in this unique experience: he is the one who supervises and assembles everyone, shouting the name of the destination, carefully organising the luggage in the hold. “No alcohol, no unpleasant smelling food, no drugs, no weapons, no smoking,” he intones in an unwavering voice. “And please don’t talk too loud on the phone. Now relax. And enjoy America. Let us worry about driving you where you want to go”. Maybe, by your tenth trip, you don’t even notice the driver’s patter, a bit like the safety information on a plane. But just for a moment everyone seems to pay attention.
Then your gaze passes through those smoked glass windows. The city, which fades into suburbs and then into wide open spaces, seems different from every other time you have seen it rushing past you from a car or a subway train. Even the interchanges now look more like arms of cement ready to gently embrace you, rather than the terrifying labyrinths you experience as a driver.
Through these windows, you glimpse dignity in even in the most run-down neighbourhoods, you see richness in the most dilapidated farm, where silos are the only new thing. You can relate to the profound dignity of the dozens of labourers of every age and race whom you see marching down the highway on their way to work on some site a few miles away.

MUSIC AND FILM: THE JOURNEY ON FOUR WHEELS
Despite the low cost fares of many airlines, Greyhound's business is still thriving: every year 20 million or more Americans choose the bus line. “We’ve made it through our first 100 years thanks to the hard work of everyone who has worked with us over the years and everyone who still does,” says Dave Leach, President and CEO of Greyhound Lines, Inc. “Every time we try to make sure that a journey on our coaches is a unique experience. We are proud of what Greyhound means to Americans”.
Its coaches go everywhere, and carry everyone, on a seemingly never-ending route. Just a few minutes’ break in one of the terminals, then back on the road. Just like Chuck Berry sang, just like the country roads of Simon and Garfunkel, not forgetting Billy Joel and some of the greats of country music. Greyhound is also at the heart of some unforgettable movies, like 1934’s Oscar-winning “It happened one night” with Clark Gable, “Midnight Cowboy” with Dustin Hoffman and the thriller “Sleeping with the enemy”, starring Julia Roberts. Paths crossing, apparently unconnected destinies, burning passions, short-lived affairs. All aboard, then, “to look for America”. The real America.

1929: Despite the crisis and to help the Greyhound Lines survive it, General Motors signs a contract to supply new vehicles.

1942: Greyhound is the transport company used by the US Army to move troops around the various bases linked with Europe. By now, the drivers also include women.

1961: Greyhound buses are used by equal rights organisations on their tours of the southern states. In Alabama a vehicle is set alight by the Ku Klux Klan. Purely by chance, there are no injuries or fatalities.

A city for bikes

road
MOST READ
Getting the show
on the road

Thanks to Pirelli tires you find the best grip in every driving style...

All tires >
Reach your professional goal at Pirelli
​Your career, training and development...
Work with us >
Let's meet channel
​The list of Pirelli meetings with university students and young graduates organized at major universities...
Newly graduates >