Since its inception ten years ago, the Fondazione Pirelli has worked tirelessly to develop the corporate culture of the Pirelli Group: this has given it the chance to enjoy a 'wider' viewpoint on some of the activities which the company has been involved in - often in myriad ways - over more than a century of history

Advertising is certainly one of those areas, extending from the first steps taken by the company founded by Battista Pirelli at the end of the 19th century to the present day.When it comes to advertising, the work of the Historical Archive has enabled the Fondazione to construct a continuous and comprehensive narrative of the marketing of the Pirelli brand: a single story capable of absorbing a range of styles and languages in constant evolution, featuring materials and expressive forms which have seen huge changes over the years and messages and images which have been adapted over time to ever-increasing globalisation. The result of this work can now be enjoyed in two books: "Una musa tra le ruote" (The Muse in the Wheels, 2015) and "“La Pubblicità con la P maiuscola” (Advertising with a Capital P, 2017), edited by the Fondazione Pirelli and published by Corraini: a multiform narrative journey which seeks to offer a unique vision of a world - that of advertising - necessarily dominated by complexity and change. 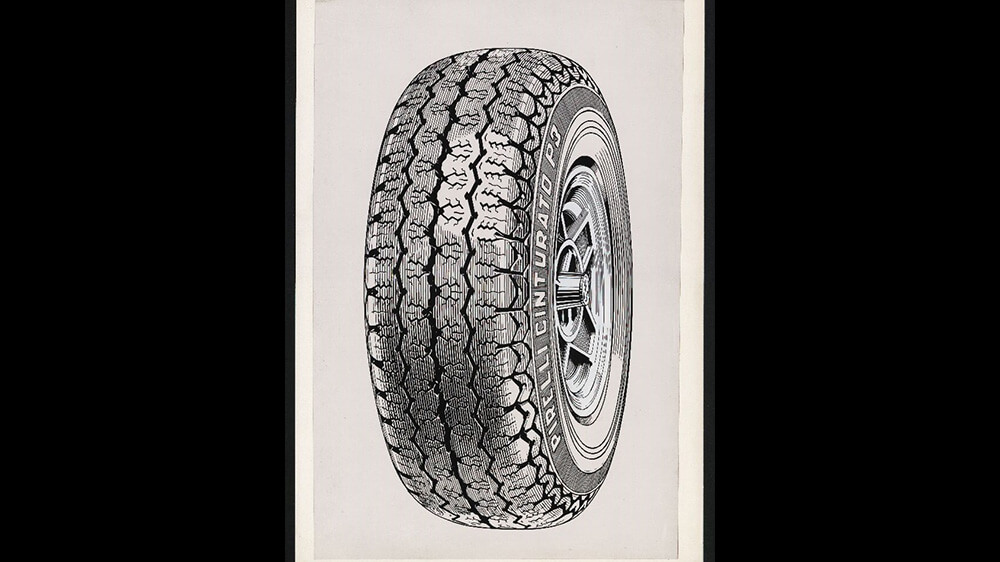 Hundreds of advertising designs are conserved in the Historical Archive: unique, original documents featuring the work of some of the greatest designers of the 20th century. The documents from the 1920s to the 1960s enable us to reconstruct what was probably the most vibrant period in terms of the company's visual communication and the moment in which the concept of advertising was itself created. At that time, it was usually known as 'propaganda'. In this period, however, the artist's freedom of expression was limited to reproducing an image of a tyre, which had to be immediately recognisable to the public. Which brings us to another important source preserved at the Historical Archive: more than 300 technical designs, created by factory engineers and used to 'photograph' the tyre for designs, posters, product lists, window displays, catalogues and brochures. An extensive journey through print advertising which - at the Fondazione Pirelli - provides information on all the things which have formed part of the core business of the company over the years, allowing us to trace its industrial and commercial history.Ideally, this collection of sketches is followed by the thousands of final designs which give us the chance to continue the narrative from the 1970s to the start of the 2000s. This is the period of advertising agencies - the internal agency at Pirelli was known as 'Centro' - and of an image scientifically constructed in marketing departments to then be reproduced time and time again. With different languages and techniques to take into account. These were years in which photography took centre stage: a special section of the Historical Archive is dedicated to the countless pieces of work realised for Pirelli products by highly acclaimed international photographers. There are also other photographs which help to tell the story of advertising from another angle - shots created for the exhibitions and fairs which Pirelli has been involved in ever since the start. Pictures which change over the years, providing examples of an uninterrupted flow in constant evolution. The first advertising film comes from 1951, an animated cartoon from Nino Pagot for the Pirelli Stelvio tyre: from that moment on, cinema and television would further deepen the complexity of Pirelli's message. Today, there are miles and miles of film completely digitalised and available for consulation online from the glorious years of Carosello (an Italian TV advertising show), as well as films and historical documentaries.

And it is here, with digital, that a new challenge is just getting underway: to understand, interpret and insert yet another language into this single, unique process.