The ties between Brazil and Italy are well known. Many Brazilians are the descendants of distant Italian relatives who came to South America at the end of the 19th century and throughout the 20th century to seek their fortune.

But never before has the most famous symbol of Brazil, Christ the Redeemer on Mount Corcovado, been lit up with the colours of the Italian flag by the head of the Italian government to celebrate the bond between the two countries.
Matteo Renzi, the Italian Prime Minister, began the event by pressing the switch to illuminate the monument overlooking the city of Rio de Janeiro in the green, white and red of the Italian flag, in the presence of, among other others, the Archbishop of Rio de Janeiro, Cardinal Orani Tempesta, the Executive Vice-President and CEO of Pirelli, Marco Tronchetti Provera, and the Executive President of Pirelli in Latin America, Paolo Dal Pino.
It was an event which once more reinforces the special relationship between Pirelli and Brazil, where the company has been present for 87 years and the long-time market leader. As part of the numerous initiatives organised to help local communities, for more than two years Pirelli has supported the conservation and maintenance of the Christ the Redeemer monument, as well as related social projects. In 2014, in particular, it financed the restoration of the monument following damage suffered from lightning strikes – making a spectacular video in the process – and this year Pirelli was also part of the project to secure the area around the statue, and will continue to provide a contribution to the constant maintenance it requires. 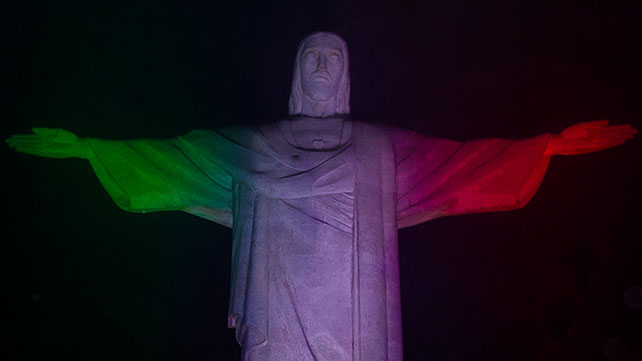 Among the other projects is www.bracosabertos.com, a digital platform recently launched by Pirelli with the Archbishop of Rio de Janeiro, which has the aim of evaluating and sharing the countless gestures, projects and acts made spontaneously by the people of Brazil to help their own community. On the website it is possible to learn about the stories in videos and written accounts of Brazilian individuals dedicated to helping their neighbour, as well as to admire the spectacular panorama of Rio from the peak of Corcovado. A window which can be reached from your computer or smartphone from any part of the world. Thanks to Pirelli, for the first time the experience includes an exclusive virtual visit to the inside of the monument, 360° images of the city and a 24-hour timelapse of the surrounding landscape.

The open arms
of the Brazilians

Much more than
just making tyres