With the largest ever exhibition of his work taking place at Pirelli HangarBicocca, Cerith Wyn Evans talks about his art, his inspiration and his fight to avoid definition

The underlying notion is clear: structures that force the flow of words and transform forms and concepts into definitions are only a norm, an accepted and widely-shared social convention; a tacit pact between the parties engaged in verbal communication. The same seemingly also applies to this interview, which begins with the artist Cerith Wyn Evans sharply resisting any kind of label. 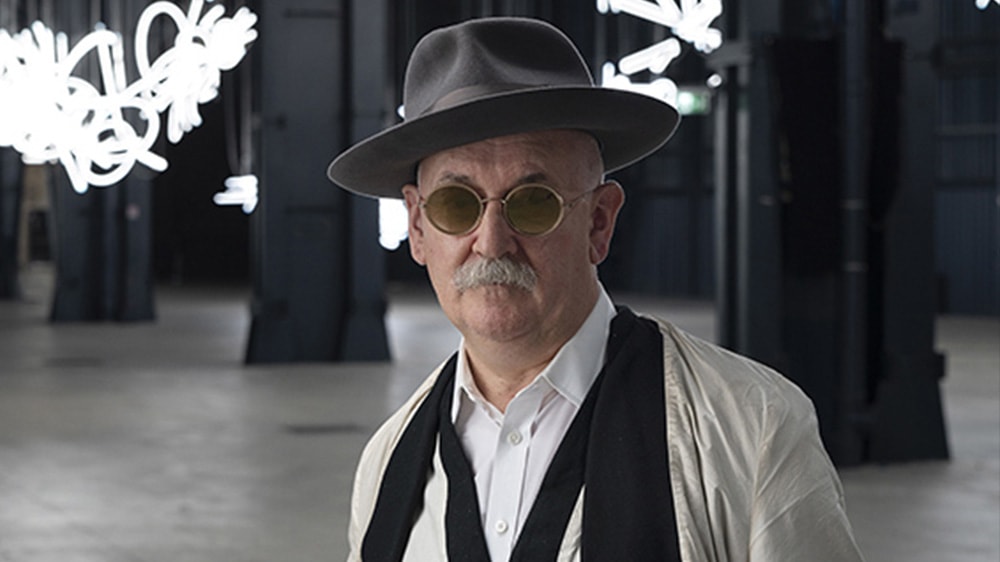 For Wyn Evans there is no better starting point for talking about his exhibition at Pirelli HangarBicocca (... the Illuminating Gas, until 23 February, 2020), his largest ever, than challenging the very idea of codes – whether visual or grammatical.

“I’m interested in themes related to symbolism and representation: how can we manage to make everything more fluid? How can we free ourselves of our obsession with using too many words that obscure the content?” he asks.

The same questions find their echo in the super-sized works filling the Navate and Cubo spaces at Pirelli HangarBicocca, stages of an evocative journey through luminous short circuits, tangled neon forms, fluctuating letters and majestic totems. Curated by Roberta Tenconi and Vicente Todolí, the exhibition is a collection of 24 works, monumental intersections of sound and light, installations both old and new. All part of an odyssey that began in the 1980s with film-based experiments and continues with the progressive liberation of sculpture from any weight or force of gravity.

Suspended commas. Intermittent full stops – like snippets of Morse code or imprints made by the projections of a crazed torch. Scars of a movement, from the past but still a movement, as demonstrated by inspirations borrowed from the choreographies of Noh theatre, which has its origins in 14th-century Japan.

From the cluster of towers in StarStarStar/Steer (totransversephoton), to cylinders of lamps of various heights, to the interweaving Neon Forms (after Noh I), there is a network of hidden messages flowing through the subsurface. The observer can choose to interpret the meanings or simply walk between the titanic sculptures with a wandering gaze. “The relationship between language and meaning is part of the experiment which interests me as an artist,” explains Wyn Evans.

“I believe that linguistics contains an infinity of questions. I also believe that all too often we try excessively to define the content and symbols that escape us.”

Wyn Evans studied under conceptual artist John Stezaker and experimental film-maker Peter Gidal at Central Saint Martins arts college in London. At the start of his career in the 1980s he was influenced by subcultures and independent cinema and performed a study on video on the basis of his reflections about words. “I was interested in film as the reproduction and repetition of the experience of life,” he recalls.

From the 1990s onwards, while turning his attention towards sculptural experimentation, he incorporated various elements – neon, lights, plants and mirrors ¬– into installations. His work appeared in some of the art world’s major museums, shows and galleries, including Tate Britain, the Venice Biennale, the Documenta in Kassel and the MIT Visual Arts Centre in Boston.

I ask him about his relationship with “space”, the physical area around us? “Space has a value that differs for everyone,” he replies. “I don't believe I have a conscious relationship with space, but my goal is to expand whatever this relationship may imply: I’ve listened to the experiences of artists who have sought ways of increasing the space available to them. I’m also fascinated by the reading of this theme, the four dimensions, advanced by physics.”

Wyn Evans interweaves literary and scientific sources, oriental philosophies and humour in his work. Fluidity of form and content is not simply a metaphor but a living subject for him, the cornerstone of the exhibition. “I didn’t want to be rigidly anchored to anything,” he says. “I wanted my sculpture to not be determined by any definitions.

“At the same time, I tried to demonstrate that this process doesn’t move away from reality: fluids exist, bubbles exist. Some things exist that are not material. I was inspired not so much by plastic forms, but by chemistry. Just think of neon and the temperature of colour: like in a syntactic structure, each small element has its place, almost like an eccentric calligraphy made of other forms.”

Inlays of curvilinear and straight lines, pulsating chandeliers, narratives of eclipses in the form of moveable characters. Each element is connected to a fragmentation of the material assumptions of sculpture. If solid, imposing, unitary forms were most in vogue during Wyn Evans’s formative years, he himself is going in a diametrically opposite direction. “There’s a material dimension to fluidity, but this is something that philosophy has taught me. It’s all thanks to Proust,” he confides.

While on the subject of assembly and disassembly, another interesting interpretative key to Wyn Evans’s work is to reflect on inverted proportions, plays on mirrors, suspended sculptures that, depending on the viewer's distance from them, suggest differing and often deceptive visions. “The concepts of proportion and scale are a part of the mise en scène. The next step is to perceive reality as an agglomeration of mises en scène. If angles and perspectives break up the presumed objectivity of things then everything becomes an illusion, a surreal model of Chinese nested boxes in which repetition is the fundamental element.”

The exhibition, with its short-circuits of lamps and rhythms, excites the curiosity of the observer. In this merry-go-round of references is there room for pure visual pleasure? Assuming that reality is often difficult to pin down, might the observer and artist yield to the rules of the game and take a more humorous approach to this art? “Yes, [the Italian dramatist and writer Luigi] Pirandello teaches us the value of humour,” replies Wyn Evans. “I believe that we need to doubt what we look at and that play is a revolutionary place in which to do this. You play when you break the rules in some way, you don't think too much of the consequences. You don’t attach importance to things regarded as sacred. It isn’t pure entertainment, but it certainly is subversive.”

Wyn Evans is able to laugh at the collective spectacle of art and the risk, for whoever creates it, of becoming entrapped in the grip of other people’s expectations. When he reflects on the current state of auctions and markets, he mocks their clichés and masquerades. Remembering when he won the Hepworth Prize for Sculpture in 2018, he notes with amusement that he “liked the building” where the award ceremony took place, “as soon as I went in I felt a positive energy.”

Not always keen to offer himself up to public opinion, if anyone asks him what relationship he has with the system he replies: “I’m a part of it, I should be grateful and I feel lucky, but at the same time it’s a mechanism that swallows you up. I was criticised when, having been nominated for the Turner Prize, I said that I didn't want to be involved. I didn't want to give interviews on British TV. All that would have come out about me would have been limited to the prize, as if the critics and public were betting or gambling on who would be the winner. I've never felt good competing.”

Unwilling to engage in (self) definitions, Wyn Evans cites film director Pier Paolo Pasolini, poet and artist Marcel Broodthaers, poet Stéphane Mallarmé and artist Marcel Duchamp as influences. He also has a fundamental and continually evolving relationship with music. This is not simply because he has worked with musicians and composers such as Russell Haswell and Florian Hecker, but also because the study of what divides or unites silence and sound is a constant practice for him, an everyday form of training: “I don't think there exists a dialectical relationship between the two elements, they really aren’t opposites.”

Another question – this time regarding the link between light and shadow – arises spontaneously: for an artist who paints with light, what is the role played by shadows? “It’s the hidden side, it’s fundamental,” he says. “We need shadows. Not only do objects cast shadows, but so do events, thoughts or feelings. When something is said clearly, what is hidden? When an object is illuminated, what is concealed? It’s the promise of clarity, and truth produces shadows.”

As if in an ever-closing circle, questions follow one another like a mantra. We are now approaching the exit door of the exhibition. But not yet. There’s time for one last question: what is the inspiration behind his work TIX3, which inverts the sign (and the meaning) of the word “Exit”?

“I don’t usually give anecdotes, but this time I’ll make an exception,” he says. “I was at a cinema in London, in Leicester Square, and as I tried to escape a boring film I became trapped in a room where the only thing I could see was the exit sign. It was a nightmare, but also a surreal situation like in a slapstick comedy. I saw it as a sign: we should allow ourselves to be inspired by the absurd stories we see every day in front of our eyes.”

The hidden power
of Carl Lewis

Misty Copeland starring as “the dancer”, as seen by Albert Watson

life
MOST READ
Getting the show
on the road