28 May was a day of great sport featuring the Pirelli logo, from the Monaco GP to the arrival of the Giro d'Italia in Milan

The Monaco Grand Prix, America's Cup, Inter-Udinese, baseball with the iconic LA Dodgers and the arrival of the Giro d'Italia in Milan. Sunday 28 May was a great day of international sport sponsored by Pirelli, a company which has always been at the forefront of sports containing passion, performance and teamwork. 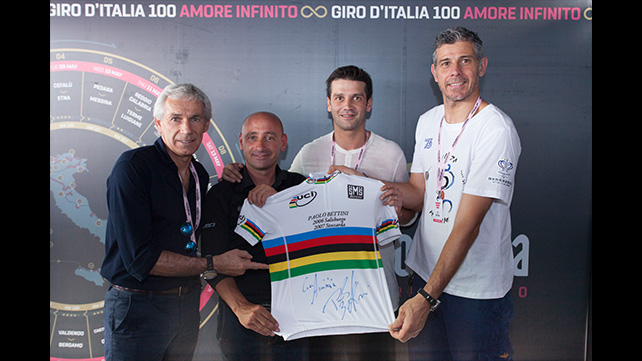 The Monaco Grand Prix, America's Cup, Inter-Udinese, baseball with the iconic LA Dodgers and the arrival of the Giro d'Italia in Milan. Sunday 28 May was a great day of international sport sponsored by Pirelli, a company which has always been at the forefront of sports containing passion, performance and teamwork.

Guests at the Milan leg of the Giro d'Italia and the serially postponed Serie A match between Inter and Udinese included Francesco Toldo, the former Inter number one, as well as Giuseppe Baresi and Christian Chivu, tough former Inter defenders, all of whom are members of Inter Forever, as well as Paolo Bettini, otherwise known as "The Cricket", a gold medal cycling winner of 2004 Olympics in Athens.

These champions have fully embraced their competitive spirits and the three Italian athletes shared with us those values that have made up this incredible Sports Sunday and which are at the core of every sport.

PAOLO BETTINI
Paolo Bettini, we have stars of football and cycling in the city of Milan, which is absolutely bursting with energy today. What do you think about these two sports?
You often hear people say that football and cycling are completely different. Actually, alhough cycling is a very individual sport, in modern cycling you can't get ahead without a strong team behind you, and in football, which is clearly a team sport, you also have to have certain individual characteristics and champions who can make the difference.

In cycling, perhaps more than in other sports, your head is what counts: how much importance do you place on psychological preparation?
A lot. In modern cycling physical preparation and sports science have produced a more level playing field: the difference is in the details, the decisions made in moments of stress and when lactic acid is flowing.  Thinking clearly in difficult moments is more a decisive factor than if you have strong legs but are no good at using your head.

You were a sportsman who reached the top of his game: what moment do you look back on with the greatest affection?
The Olympics, without a doubt. Living in the Olympic Village, speaking about sport all the time and managing to come home with the gold medal from Athens was a wonderful experience: it was the perfect realisation of a sporting dream. It says it all that some people recognise me as an Olympic champion first before worrying about which sport I actually competed in.

FRANCESCO TOLDO
What does sport mean to you, and how does it make you feel to see Milan as the focal point of this day?
Milan is always at the centre of sporting events, be it marathons, football matches or cycle races like the Giro. Sport is about feeling good about yourself, especially if you do it on an amateur level.

A goalkeeper is a bit like a cyclist, it seems like they're alone, but they have a team behind them working with them to help them achieve their goals. What do you think?
The comparison between goalkeeper and cyclist is exactly right, even if in football the team works for the star player, not for the goalkeeper. The most important point is that teamwork is always essential in order to have support and achieve better and better results.

GIUSEPPE BARESI
Milan is a very important city for you from both a sporting and personal perspective. How do you feel when you see the Piazza Duomo so full of people?
It was the first time I've seen the arrival of the Giro, and it's even more special watching it in Milan. You can see how attached people are to cycling, and that the sport is still humble and about hard work. I've really enjoyed the chance to experience the atmosphere and the occasion.

How important do you think teamwork is in football and in cycling?
Teamwork is essential, because it enables the individual qualities to emerge which lead to success. You have to have teamwork and synergy, otherwise you won't get the results you were hoping for.