Tim Walker’s Wonderland, as seen through the protagonists’ eyes

Revealed six months after its high-energy shoot in London, the 2018 Pirelli Calendar was described by its protagonists as “a dream to work on,” “everything I have ever wanted,” and even “chaotic – in the best possible way.” Shot by English photographer Tim Walker and featuring 18 protagonists from the worlds of fashion, movies, music, and even social activism, the theme of the 45th edition was Alice’s Adventures in Wonderland, providing a healthy amount of fantasy for all involved.

“Alice has been told so many times,” Tim Walker said, “and I think I wanted to go back to the genesis of the imagination behind Lewis Carroll so that you could tell it from the very beginning again. I wanted to find a different and original angle.”

His different and original angle involved photographing an all-black cast, the second time this has occurred in Pirelli Calendar history, after the English photographer Terence Donovan portrayed five women, including Naomi Campbell, in 1987. 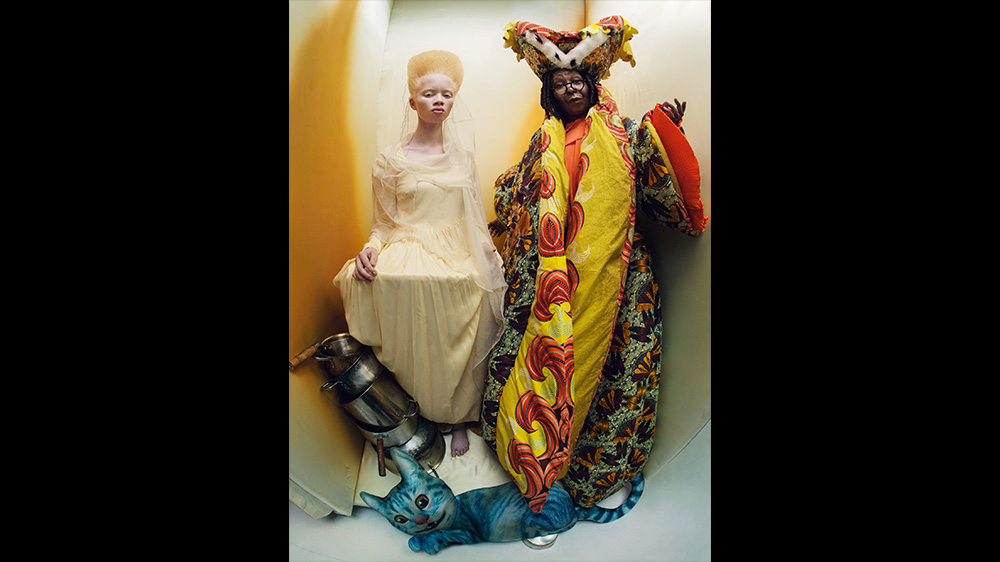 All costumed by the stylist and now Editor-in-Chief of British Vogue Edward Enninful, each protagonist was carefully selected and given an important Wonderland role. Some protagonists were paired with each other, such as Djimon Hounsou with RuPaul, who played the King of Hearts and Queen of Hearts respectively. “As the King of Hearts, you have to let the Queen rule. Loud and clear!” Djimon laughed, referring to his working relationship with RuPaul “yapping all day, very loud and extravagant,” as being his favourite part about the shoot.

Working with Sean “Diddy” Combs, who played a Royal Beheader alongside Naomi Campbell, caused her to “laugh from beginning to end.” She said that “whatever they wanted me to be, I was there. I think it was fun to be a Beheader. Off with their head! I’m very bossy anyway. Don’t do what I want, off with your head!”

Casting Duckie Thot, who has only just started her modelling career but already found great success, was the “biggest surprise” for Tim Walker. “She hadn’t done a lot of modelling before we cast her as Alice. I just think she carried that lead role with so much strength.”

For Thot, “this Calendar is my dream job. Pirelli has always been my dream job as a model. It was something I thought I would do in five years, six years’ time. To be able to be lensed by him [Walker], and for Pirelli, those two together is my dream.”

“As a photographer I couldn’t tell Alice the way it’s been done before,” Walker said, adding “another responsibility as a photographer is you’re always in tune with what feels right, now.

His decision to portray a black Alice, indeed an entirely black cast, was met with excitement, enthusiasm and pride by all of the protagonists, with women’s rights activist Jaha Dukureh explaining “I’m not a model or celebrity. I work on issues that people don’t normally talk about. When Tim reached out to me, I couldn’t believe it. Being in the Calendar, for me, meant he saw me. He saw a strong woman. It made me so happy.

Thando Hopa said the team “worked together to try and bring in this message of diversity,” saying that every protagonist felt the level and weight of what their inclusion in the Calendar meant. Djimon Hounsou added, “it’s really the idea of integration, allowing me to exist in a fantasy world.”

Ultimately, ‘I hope people feel inspired, to as themselves, believe in their dream and get to where they want to be in their life,” said Naomi Campbell. “They can end up in the Calendar and never give up.”

In the 45th edition of the Calendar, all shots were taken in London in May, producing a Calendar featuring 18 protagonists over 28 photos. See a sneak peek of this exciting Calendar in this fascinating behind-the-scenes video.